Last week on Sports Spectrum, we profiled Mississippi State’s tandem of head coach Vic and daughter Blair Schaefer on the road to the Sweet Sixteen.

On Sunday, coach Vic Schaefer watched his team defeat Baylor 94-85 in an overtime thriller to advance to their first-ever Final Four. The Lady Bulldogs got an all-time performance from junior Morgan William. The 5’5 point guard scored a career-high 41 points on 13-22 shooting (6-8 from three-point range) and also dished out 7 assists.

After the game, in an interview with ESPN, William broke down in tears as she dedicated the game to her late father.

As ESPN reported, William knew Donnie Rory as her daddy from the time she was 2-years-old. Technically, he was her stepfather, but he was the one who played sports with her, motivated her, encouraged her and helped raise her. Rory died on March 25, 2014 when William was a high school senior in Birmingham, Alabama. Almost 3 years to the day, Morgan played her best game as a basketball player. 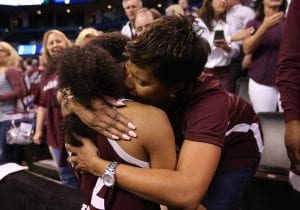 “He saw me win a state championship, but he didn’t see me go to prom or graduate,” William told ESPN. “I remember him coming home from a game, and he had complained about his chest. But the next day, he went to work. And then had a heart attack and passed. I remember a few days later, I tried to go to the gym, and I just couldn’t do it. We had been working out since I was a kid. People had always thought I was too small — ‘She won’t go far, she’ll probably play [Division II]’ — but he believed. We’d get in the gym at 5 a.m., and he pushed me past what I thought was my limit.”

Coach Vic Schaefer said Morgan William was closest thing he had to another daughter on the team. “She’s like my other daughter. She is very, very special to my family. I am just so proud of her. What an unbelievable day.” 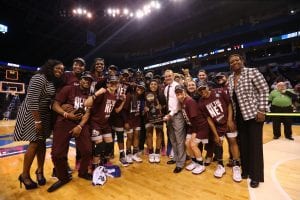 Next up for Mississippi State is a trip to Dallas to play in the NCAA Women’s Final Four. Their opponent will likely be the undefeated Connecticut Huskies, who have won 110 games coming into their Elite Eight matchup with Oregon on Monday Night. The task will be daunting, but no matter what happens, Schaefer, William and the rest of the team have a memory that will live with them forever.