Vic Schaefer has been the head coach at Mississippi State for the past five seasons, with the past two seasons winning 27 and 28 games respectively. This year, his Lady Bulldogs basketball team had their most successful season ever, winning 31 games and earning a 2-seed in the NCAA Women’s Tournament. In their first two tourney games, they defeated Troy and DePaul to advance to the Sweet Sixteen. 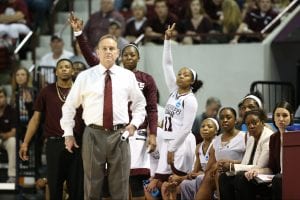 But the team with 29 wins coming into the tournament looked a bit different the past two games. That’s because Coach Schaefer saw that his team needed a jolt and changed the starting lineup inserting three new players, including his daughter, Blair.

The younger Schaefer was a key contributor off the bench during the season playing in all 35 games, averaging 5.1 ppg, and was a major threat from outside, hitting 40 three-pointers, tied for second best on the team. However, once Blair became a starter in the NCAA Tournament, she’s taken her game to a different level. 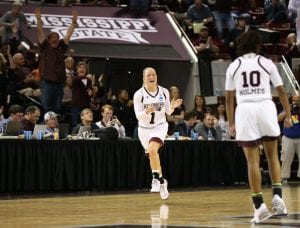 Schaefer scored a career-high 21 points as her Bulldogs dominated Troy 110-69 in their first round matchup.

In the 2nd round game against DePaul, Blair again was in the starting lineup, and again played very well, scoring a team-high 18 points.

Vic Schaefer has been coaching his daughter since 7th grade. But as the Associated Press reported, there’s always been a distinction between dad/daughter and coach/player. Coach Vic never wanted to play favorites and knew that his little girl was going to have to bust her butt and prove that she belonged if she was going to get playing time. And prove it she has.

“She’s earned her way,” said Coach Schafer. “She’s a heckuva player. There’s no moment too big for her.”

Thankful for the unique opportunities that God has blessed me with. God is so good. #IPlayForHIM pic.twitter.com/oT84cbubc5

Blair Schaefer isn’t just a basketball player. She’s also an unashamed Christian, who uses her social media platform to share her faith in God. Following her win against DePaul, she shared a verse from 1 Peter 5:6 that talks about humility and humbling ourselves under the mighty hand of God.

1 Peter 5:6 "Humble yourselves, therefore, under the mighty hand of God so that at the proper time he may exalt you."

The Father/Daughter Schaefer combo are headed to Oklahoma City as they help lead their Lady Bulldogs squad against 3-seed Washington Friday Night at 7pm ET on ESPN2.