By Justin Adams Oct 17, 2017
Verizon Center, Washington, DC: LeBron James of the Cleveland Cavaliers during a game against the Washington Wizards on February 6, 2017. (Photo by: Keith Allison/CC License https://creativecommons.org/licenses/by-sa/2.0/legalcode)

Another NBA season is ready to tip off and the question is simple, who will challenge the Golden State Warriors for the Larry O’Brien Trophy?

Many believe the Cleveland Cavaliers have the best chance at recapturing the title with LeBron James at the helm, but there are many questions surrounding the Cavs with the trade of Kyrie Irving to the Boston Celtics in the offseason.

It will just be a couple more names Jerry Birch will add to his rolodex as he enters his 19th season as the Cavaliers chaplain. Birch, who’s also the co-pastor of Abundant Grace Fellowship in Cleveland, spoke to Jason Romano on the Sports Spectrum Podcast about the challenges of being a chaplain for a NBA team.

“The most difficult and most challenging thing is to develop the kind of relationship where you not only have a player’s trust, but you have his heart,” Birch said to Sports Spectrum.

Birch also spoke about his relationship with LeBron James and how he professed his faith in Jesus Christ.

“LeBron confessed Christ publicly early on in his career on National TV. LeBron is a believer,” Birch said to Sports Spectrum. “We’re not friends or buddies but whenever I see him in the hallways, or around the arena, I always encourage him.”

One of the ways Birch encourages James and his teammates is by creating “Chapel Notes” available for the players to read before the games. 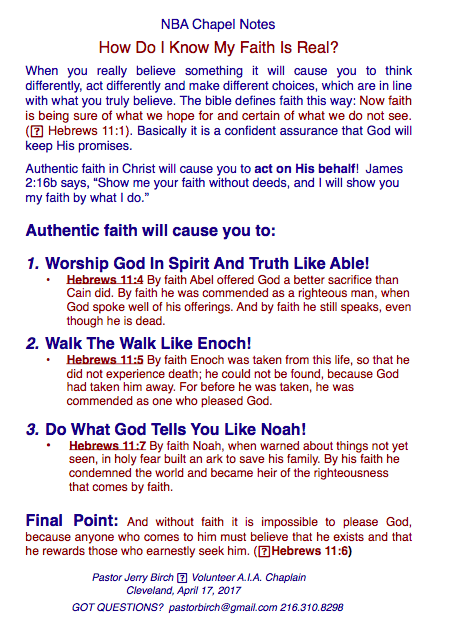 Pastor Jerry Birch’s Chapel Notes He Gives To The Cavs Before Games.

“We produce ‘Chapel Notes’ that the players allow me to receive in the locker room before the game,” Birch said. “I know LeBron and all of the players read these notes.”

LeBron James and the Cavaliers will begin the NBA season when they host the Boston Celtics at 8 p.m EST.

To click below to the Sports Spectrum Podcast interview with Jerry Birch.