If you want to be first, find a way to be third.

That’s the motto Indiana Wesleyan has adopted with its men’s basketball program: God first, others second, ourselves third.

On Tuesday night, coach Greg Tonagel’s squad finished first in the nation, winning the 2018 NAIA Division II National Championship with an 84-71 victory over Saint Francis (Ind.) in Sioux Falls, S.D. This is the third red banner in the past five years for the Wildcats, which ties them for the most in NAIA Division II history.

“The first championship will always be remembered in a special way,” Tonagel told Sports Spectrum. “However, our platform is bigger now so it seems there is greater opportunity for Kingdom impact.”

Kyle Mangas led IWU with 23 points and was named the tournament’s Most Valuable Player. The 6-foot-3 freshman from Warsaw, Ind., was dominant all season, leading the Wildcats in scoring at 21.5 ppg, but it was his poise under pressure in the tournament that Coach Tonagel says really stood out.

“Kyle is a rare kid,” Tonagel said. “He’s got an uncanny ability to score without volume. He has great poise. His ability to focus in the moment is unreal. He loves challenges for growth. We are excited about the next phase of growth which will be his spiritual vocal leadership.”

Seniors Ben Carlson and Jacob Johnson finished their college basketball careers in grand style. Johnson had 14 points and four rebounds in the championship game, and Carlson won the Hustle Award.

“I just love these guys for the men that they are,” Tonagel told IWUWildcats.com. “This is one of the best years of leadership we’ve had. They took a team that last year struggled with buy-in and we had apathy. They turned the team into some passion. The theme of the year was Hunger-Habits-Humility. Ben and Jacob drove a hunger into the team and helped form some habits. And here we are on the biggest stage and I think guys are showing a lot of humility right now.”

Earlier on Tuesday, prior to winning the title, the Wildcats’ entire team gathered at the team hotel to reflect on the season, hear testimonies from players sharing what God had done throughout the year, and praise the Lord for how He had used the 2017-18 season to transform the team from the inside out.

“The championship was second-best thing that happened to us today after our devotional time,” Tonagel told us. “Man, did we sense the presence of God in that room! That was the greatest part of the day. I cried my eyes out.”

If you want to be 1st, first find a way to be 3rd! pic.twitter.com/TXMTKWlntf

The “find a way to be third” philosophy is something Coach Tonagel says is the key to his team both on the court, and more importantly, away from the court.

“It’s the complete opposite of the way our world works,” Tonagel told us on the Sports Spectrum podcast. “The world is based on upon a me-first mentality. It’s really the focus of our age. The DNA of sin is selfishness. What do I want? What do I need? It’s really about: If you first pursue God, and then you pursue other people, eventually God will give you what you need and what you want.”

Tonagel says this motto isn’t something he made up. It’s something he’s learned as he’s grown in his relationship with the Lord.

“We’re just trying to join what Jesus has already talked about. I mean, it’s His idea right? We didn’t make up I am Third. It’s his life. He lived in a radical obedience to God. He lived in selfless love to other people.”

Indiana Wesleyan returns home on Wednesday, where it’s expected to have its National Championship Welcome Home Celebration on its home court at Luckey Arena. Congrats to the Wildcats on another title. 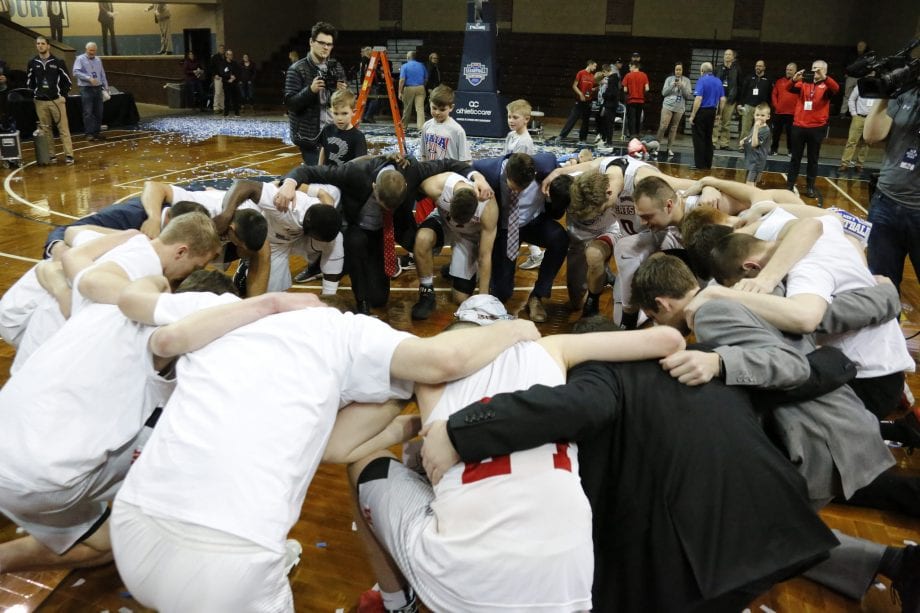 “Do nothing out of selfish ambition or vain conceit. Rather, in humility value others above yourselves, not looking to your own interests but each of you to the interests of the others.” — Philippians 2:3-4