Tad Glibert is the assistant director of operations for the Northwestern University men’s basketball program. Last month, he set out on a missions trip with Circle of Hope International, which has partnered with the Grace Alliance Church in the African country of Malawi to build the Grace Center — a boys and girls orphanage, church, school, feeding program, and soon to be medical clinic and maternal center.

His wife, Karly, sits on the board of directors for Circle of Hope, and joined Tad on the trip.

“Many of the kids who live in the orphanage have lost one or both of their parents; others were abandoned and some were rescued from abusive situations. But you will not hear them complain. In fact, these kids are the most joyful kids I have ever been around,” Tad wrote on the CoachWingreen.com blog.

For the first two days, the Gliberts and their team painted and prepped the medical clinic, Tad played soccer with the kids, and the school held an assembly to present uniforms to the soccer team which were purchased following a fundraiser Tad launched last summer. 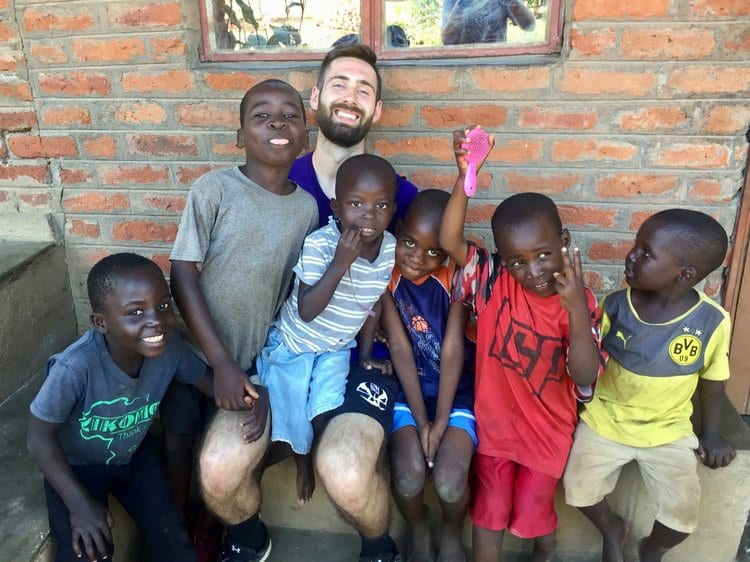 But then late one night, the Grace Center was robbed by 15-20 masked men. Tad and Karly heard the commotion from the tent they were sleeping in. They heard a metal gate violently clang back and forth, they heard glass break from the pastor’s house, they heard loud pounding and people yelling, they heard people run right by their tent, followed by the sound of someone being beaten. Then they heard Len, the husband of the Circle of Hope director, limp by and say, “We are getting robbed, hide yourselves.”

Tad and Karly tore through their belongings in the dark in search of anything to use as a weapon. A small pair of scissors and Karly’s stethoscope was the best they could do.

“In that moment, the thought of dying became real,” Tad wrote. “My wife was next to me and my mother-in-law and sister-in-law were in the tent next to us. Karly and I turned to each other and said, ‘I love you.’ I remember I closed my eyes and prayed over and over for God to protect us.”

The noises soon stopped, but they remained quiet in their tent. Though it felt like forever, Tad estimates the whole robbery and waiting time took about 45 minutes. The Gliberts and their group soon convened in the house to assess the damage.

Only a few men were hurt, and the robbers made off with only a few objects. As the group put their stories together afterward, they saw God’s mighty protection over all of them.

“[The robbers] broke into every room of the house except the room that our director was staying in. That was the room that had our passports and money in it,” Tad wrote. “There were 6 tents surrounding the house, and 5 of them were occupied. The robbers sliced through the only empty tent with a machete — a tent that we had set up about 5 hours before the attack. If they had come to any of the other tents they would have found people, money, and valuables leading them to check all the other tents.

“Also, there is typically a light on the house that shines down toward where our tents are set up. However, a team member turned it off that night, and she doesn’t know why she did it. Although it was a traumatic experience, it could have been far worse. As we prayed to be hidden, we believe God blinded the men to our five occupied tents. If the attack happened one night prior, we would have probably cancelled our team’s flights to Malawi and we would have all gone home. If the attack happened one night later, there would have been people in the tent that was slashed open.

“God’s timing was perfect. And He protected us that night.”

For those of you who are interested in reading about my recent trip to Africa ⬇️. Thank you @CoachWingreen for allowing me to share! God is always good https://t.co/B7W0k9Bspq