At 32-15, the Indiana Pacers are firmly among the best teams in the NBA. They sit at No. 3 in the Eastern Conference, just 2.5 games behind league-leading Milwaukee.

But they will now have to endure the rest of the season without their best player. Pacers guard Victor Oladipo ruptured a quad tendon in his right knee Wednesday night, and an MRI on Thursday confirmed that the 2018 All-Star will need surgery.

Oladipo arrived in Indianapolis in 2017 after three seasons in Orlando and one in Oklahoma City, and promptly earned his first All-Star nod while averaging a career-high 23.1 points per game. He led the Pacers into the playoffs last season as the No. 5 seed, but they fell in seven games to LeBron James’ Cleveland Cavaliers in the first round.

Oladipo has remained the Pacers’ leading scorer this season with 18.8 points per game, but the squad will now need to lean on others to carry the scoring load.

The 26-year-old is leaning on his faith in God to endure the challenge ahead. He posted an Instagram message on Thursday and called it “Good Morning Knowledge.” Among his five points, Oladipo said, “Stay positive in every situation. Wake up and count your blessings, don’t dwell on the negative.” 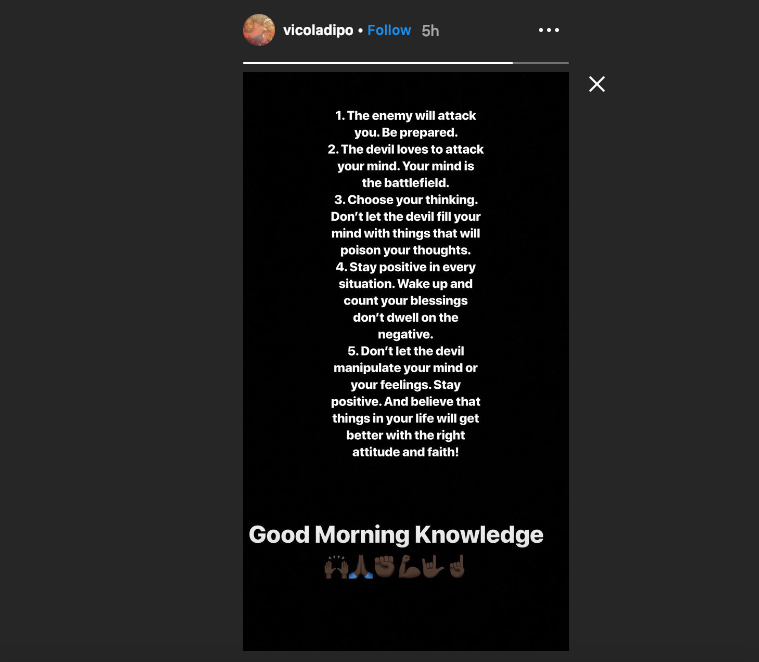 The son of two Nigerian immigrants who is also a renowned singer, Oladipo was raised in church. That upbringing helped set the foundation his life is built on today.

“I think the biggest approach for me is, I’m always on a mission, I guess you would say, to be great — and to show everybody that God is the reason why I’m chasing greatness,” he said last year. “At the end of the day, I feel as though this is what I’m supposed to be doing. God blessed me with this ability not only to impact people around me, but the people in the world as well. And that’s what I’m trying to do with this game.”