But the pandemic took more than just games and time with each other; it took away what Hope head coach Brian Morehouse felt like were legitimate national championship opportunities for his teams.

Not getting to see the last two seasons play out was eating away at Morehouse and his players. But their perseverance was rewarded on Saturday, capping off a dream season with a 71-58 win over Wisconsin-Whitewater in the D-III championship game.

It marks the third national title in program history.

“This team had to just keep bouncing back,” Morehouse told Sports Spectrum. “Time after time they were met with a roadblock, and instead of quitting, they kept going despite the exhaustion the bad news created.”

While Hope (in Holland, Michigan) has established itself as D-III power, winning national championships in 1990 and 2006, this current run of success started with a 78-48 win over Luther College (Decorah, Iowa) on Nov. 2, 2019. The Flying Dutch went 29-0 during the 2019-20 season before the pandemic ended the season abruptly in the Sweet 16.

Hope started the 2020-21 season 16-0 before, once again, its season ended early in March, again due to the pandemic. The Flying Dutch then started off this season 16-0 once again, before finally suffering a 70-62 loss to Trine University on Jan. 26.

They won every game the rest of the season, including two close wins over Trine — one being a 57-52 win in the national semifinal.

They felt the pressure, but they responded, Morehouse said.

“The resiliency over the course of multiple seasons was an opportunity that other teams didn’t experience because there was always a finality of the end of the season either in a championship or in a loss,” Morehouse said. “I’m most proud of the burden this group carried in the pressure starting the season and how they looked at it straight in the eye and took it on instead of running away from it. 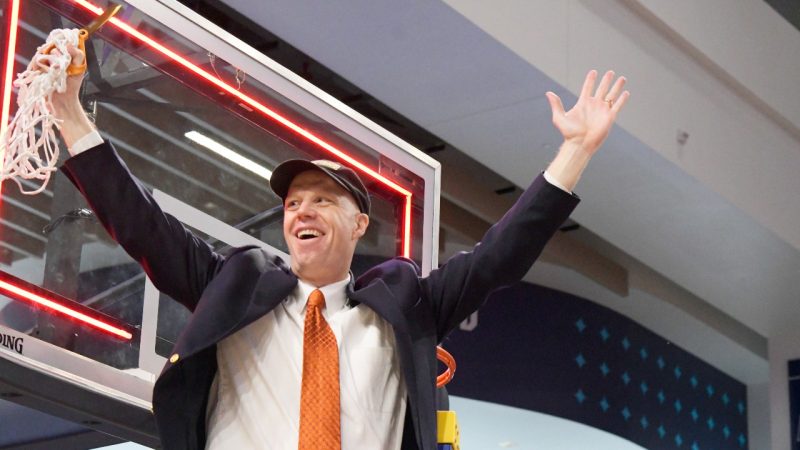 “Culture” is a term used often in sports, but Morehouse said that’s the key to success at Hope, where the culture of the program is largely shaped by their shared faith in Jesus. With their faith at the front of their mind, Hope’s women’s team operates with belief in “the power of the circle.”

“There’s nobody that’s more important than anybody else. So our strength is in our circle, and it’s leaning on the person to your left and right.”

Several players are involved in a players-only Bible study, while many others are involved in service and mission projects. On the school’s website, it is described as a college “where academic excellence and vibrant Christian faith join together in a supportive and welcoming community.”

“I think faith comes in many different forms with a basketball team in our situation,” Morehouse said, “but I think we gain comfort in knowing that God is in control and that He will give us enough no matter what the circumstances.”