ONE COACH: Football Is Way Down the List - Vernon Fox

For a man who has spent way more than half of his life playing and coaching football, often at a very high level, Vernon Fox has a healthy perspective of the importance of the game.

“Coaching football is a ministry,” Fox said. “When I accepted the job at Faith Lutheran High School, it was with that sole purpose in mind. This is an opportunity to infuse ministry with the game I’d been around for 18 or 19 years, at that time.

“For me, that’s the bigger picture: what we’re putting in them, and not just what we’re giving to them in terms of football skills. Our foundation is to build men of character, integrity, accountability and excellence. That happens through winning, through ‘lessons,’ as we call them, and through experiences the game of football can give you. There are so many spiritual lessons that you can learn. We utilize the Word of God every single day to merge that together.”

A lifetime of evidence was enhanced recently when Fox’s Faith Lutheran football team had its plans change dramatically. The Crusaders, from Las Vegas, opened the season with a trip to Denver to play Valor Christian in a clash of high school football powerhouses. They were planning on following that up the next weekend with a trip to Houston to play another high school power, St. Pius X.

But Hurricane Harvey put an end to those plans.

Instead of focusing on the inconvenience of a drastic change of plans, Fox focused on the people of Houston. 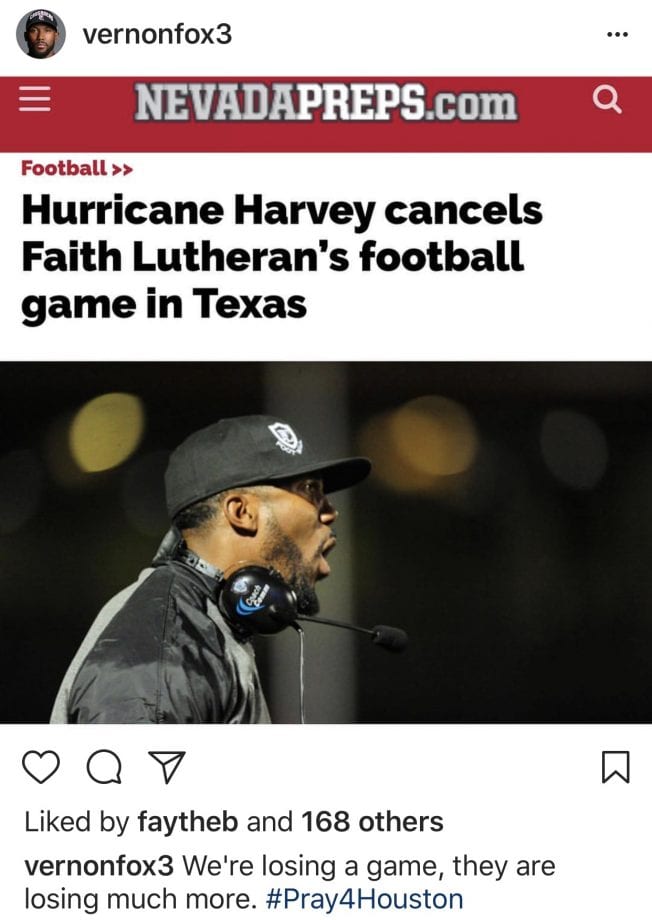 “We’re losing a game, they are losing much more. #Pray4Houston,” Fox sent out on Instagram and Twitter.

“It’s hard to focus on the misfortune of missing a football game when people have lost so much,” he said to the Las Vegas media when announcing the cancellation of the game. “Our prayers are out to that administration, staff, school and everyone that is affected by this.”

Fox is an eight-year NFL veteran safety who had to prove himself every step of his career. A four-year starter in college for Fresno State, he still stands ninth all-time in tackles (289) for the Bulldogs. But college success did not draw much interest at the next level.

He was not selected in the 2002 NFL Draft, but by the second game of his rookie year, he was starting for the San Diego Chargers. At each stop of his NFL career – including stints with the Detroit Lions, Washington Redskins and Denver Broncos – he was signed to be a backup. But he ended up starting for the majority of his career.

Following a playing career that exceeded expectations, Fox has been successful as a high school coach, winning a state championship in his first season. But he didn’t get into coaching for the wins and losses. 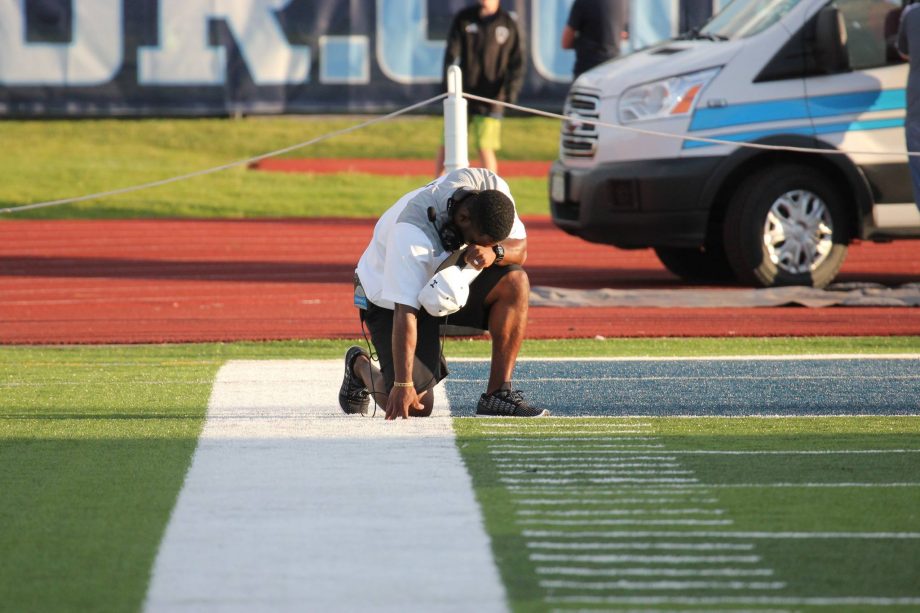 “Having the opportunity to change the lives of these young men,” he said, when asked about the best part of coaching. “I don’t think you really appreciate it or realize it until they graduate and come back and tell you how you impacted them. One of the most special moments for me was when a family came to me and told me that they had been at the school for four years. They hadn’t really been attending church, but they sent their son to the school because it’s a good school. They told me that the experience they had that one season with my staff and our program – they saw something different in us. They understood that God is real and prayer changes things. Their faith grew in their family. That’s one of the most impactful things that could have happened. Those are moments I live for as a coach.”

The influence of a coach is undeniable. Fox knows that influence is a powerful thing. He tells the story about influence that reminds him that people are watching him, whether he knows it or not.

“When my son was 2 years old, he really took to his preschool teacher. He still talks about her today, and he’s 7 years old. This was right around the time that he was learning to speak and how to say different words,” Fox said. “My wife and I noticed that he had developed kind of a weird way of saying certain things. We didn’t know if he had a speech impediment or if we were going to have to work extra hard with him as he developed his speech patterns.

“When we had a parent-teacher conference, my wife and I looked at each other and started laughing, because of the way she was saying certain words. She had an Ethiopian accent, and because of the time our spent with her, he was imitating her and adopting her way of speaking.

“It was a testament to the influence you can have, whether you know it or not. It’s a constant reminder to me that anyone with whom I have contact is picking up things from me, many times when I don’t even know it. They’re watching you, whether you want them to or not. That’s why it’s important that your life aligns with the words you speak. It’s not enough to talk a good game. If you’re not living it, they’re going to figure you out really quickly.”

Faith Lutheran lost the game at Valor, even though it led 21-14 at halftime. As he rallied his players around him after the game, Fox encouraged them to play harder the next time to try to avoid the taste of losing. But that was not his main point.

All the players’ eyes were fixed on Fox as he told them that he loved them and was proud of them. He concluded his comments, as he always does, with a prayer. His prayer had nothing to do with football. He prayed for the injured quarterback of the other team, and then he asked God to direct their path.

You see for Fox, football is not that important. It’s just a vehicle he uses to share his love of Jesus Christ, and those He puts in Fox’s path.

Clemson coach Dabo Swinney looks to Christ, hopes to bounce back in 2022