“And they brought young children to him, that he should touch them; and his disciples rebuked those that brought them. But when Jesus saw it, he was much displeased, and said unto them, ‘Suffer the little children to come unto me, and forbid them not; for of such is the kingdom of God.’”—Mark 10:13-14 (KJV)

I coached a T-ball team this past spring. I had eight boys and four girls ranging in age from 4-6. I had heard all the stories about that age group, how they ran to third after they hit the ball and how some picked flowers in the outfield. All of that proved true, including playing in the dirt and running aimlessly around the infield after each batter from the opposing team hit the ball.

One of my players, who was standing on first after getting a hit, even picked up a slow roller that a teammate hit and threw it to second base, which, if we were calling outs, would have gotten himself out. Children definitely can make us laugh and provide humor in the midst of good times and tough times. Even more, though, they can teach us lessons as we see in this passage. 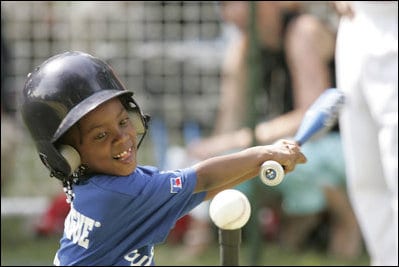 I learned that lesson in a humbling way. After practice one day, we were starting to pray, as we always did, and one of my players asked if he could pray. I hesitantly said yes, but said I would close (you know, to say the real prayer so that God would hear). After I heard this genuine, sweet prayer by this child, I was floored and embarrassed that I had those thoughts.

As I walked to my car, I confessed to God that I was sorry that I didn’t think a child could offer up a prayer to Him. The next time we deny a child something spiritual or think he or she isn’t ready for something like that, remember that Jesus told us to not deny them. Also remember that acting childish isn’t always bad.

OneCoach, part of the Sports Spectrum Network, is an international community of coaches and spouses who have been uniquely gifted and called by God. Visit OneCoach.org for more stories and videos.

Ahead of super regionals, UNC baseball coach Scott Forbes hopes others ‘see [Christ] in me’

SS PODCAST: Kurt Hines on coaching, his viral video, telling others about Jesus