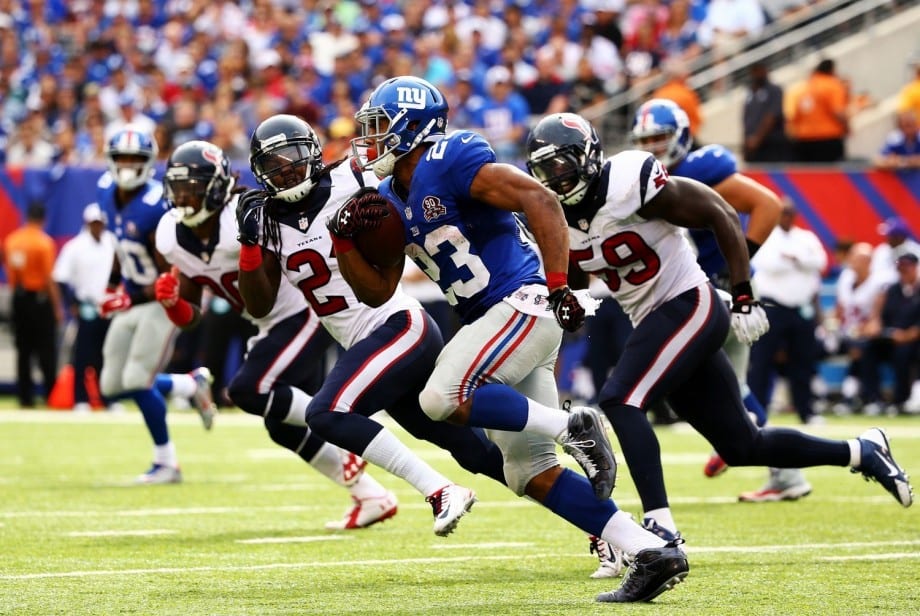 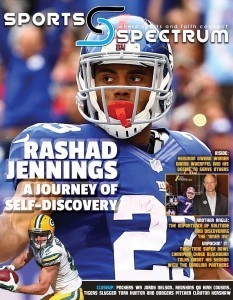 Rashad Jennings sits inside his New Jersey home across the Hudson River.

Two days before, he rushed for a career-high 176 yards in the New York Giants’ 30-17 victory against the Houston Texans in Week 3. He dedicated the game to his father, Albert Jennings, a double amputee who lost his legs to diabetes.

Jennings looks down at his blank piece of paper, silent and reflective.

Here he is, the starting running back for the New York Giants, in the biggest city in the country.

It’s been a long road for Jennings, 29, a seventh-round draft pick out of Liberty University in his sixth year in the NFL—from two consecutive years on injured reserve for the Jacksonville Jaguars, to having a breakout season for the Oakland Raiders in place of injured starter Darren McFadden, to finally signing a four-year, $14 million contract ($3 million guaranteed) with the New York Giants in March.

From a career backup to this: Tom Coughlin’s go-to running back.

Jennings picks up his pen.

Without a doubt, he is experiencing one of the most exciting years of his football career. But it’s here, in the quiet, in the stillness, that he sees the world for what it really is, himself for who he really is, and gets lost in something that breaches into the complex and unfathomable.

He begins to write.

“He’s my shield; He protects my joy even when I attempt to steal it.
He’s my peace, keeps me calm, when my anger tries to unleash.
He’s my strength, keeps me running when my body is spent.
He is my light; He helps me navigate from sleepless nights.
He is my breath, the Owner of time, Owner of life, the only One who knows my death.
He is my food; every moment that I spend with Him, my strength is renewed.
He sits on His throne; there will be many false witnesses, plenty mimics, but never to fall.
He is my Creator, no random chance or happening stance could have given me so much faith.
He is my compass, my destiny is heavenly and guided by His promise.
He is my perfection, I am just a man but in His hands, I am promised no rejection.” 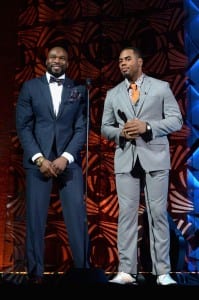 “It’s like my escape from reality,” he says. “To get lost in thought is to be separate from the world for a minute. That’s where my filter continues to grow and I process the winds in life that are blown at me. I get to know myself more. I grow as a man, I grow as a leader, and I grow as a follower—when I am forced to express the way I feel.”

In a world where athletes are stereotyped to be shallow and only admired for their freak-of-nature athleticism, Jennings shatters the mold. He also plays guitar and is known to perform magic tricks in front of his teammates. It is a bit odd, even, to hear a premier running back in the NFL talk about feelings and expression and poetry. It’s admirable nonetheless. As Jennings’ favorite author, C.S. Lewis, says, “Your real, new self will not come as long as you are looking for it; it will come when you are looking for Him.”

Jennings takes this quote to heart, taking time each day to focus on God and allow his soul to be searched by the Almighty.

“I get philosophical and get in tune with my inner me,” he says. “I allow myself to rest upon God and allow my thinking to find that ultimate thought…I just reflect on whatever it may be—to get excited about life, to see where I can continue to grow, to look at my mistakes and learn from them, to empathize with other people around me is something I’m trying to do more. Overall, I’m trying to become a better person. While playing this game of football, I want to see how many lives I can impact along the way and hope at the end of the day that I’m leading people to Christ—not to look at myself.”

It’s this introspective look at his soul that allows him to return to something constant—his faith—in an inconsistent world.

“There are a lot of things that are all happening at one time in my life,” Jennings says. “You can get pulled in so many directions—so many emotions pulling at you. More than you can imagine…It takes a lot of denying of self. It takes a lot of hiccups, as well. A quote that I pass by every single day in the hallway is from Nelson Mandela, and it says, ‘Do not judge me by my successes, judge me by how many times I fell down and got back up again.’”

“Writing brings me back to my checkpoints, rather than my goals. I am a bigger believer in setting checkpoints…so then it falls on falling in love with the process rather than the outcome.” 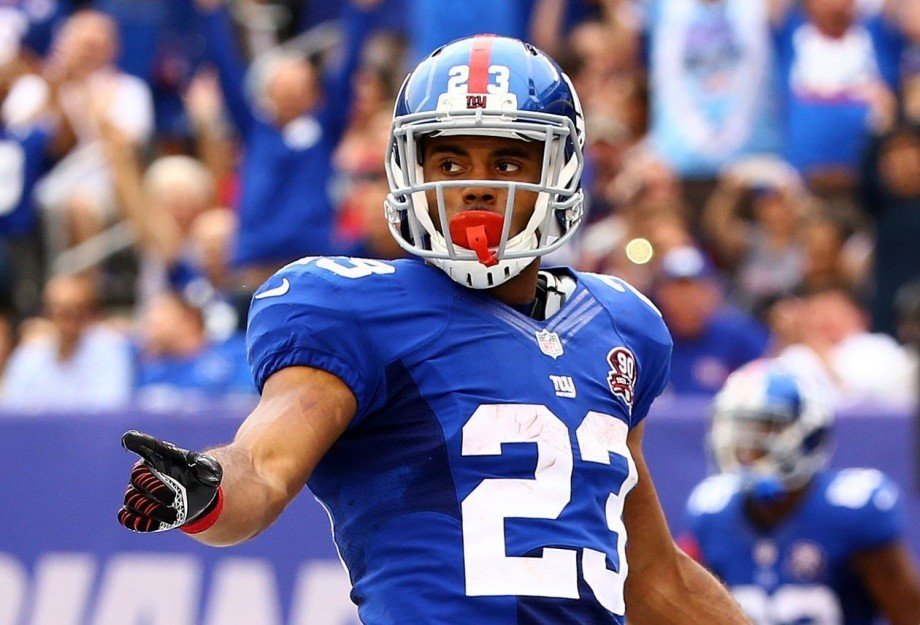 Learning in the Process

So far, the process has led to a pretty good outcome.

Growing up, Jennings was never the most talented player and never the most physically fit. One day in high school, he says he woke up and realized that he weighed 270 pounds (now he is 6-foot-1, 231 pounds) and rode the bench—not a good start if he wanted to one day achieve his goal of playing in the NFL.

“I was a chubby kid, overweight, dorky glasses, asthma, 0.6 GPA, and told what I could or couldn’t do,” Jennings says. “I had to overcome a lot of giants to become a Giant. I’m thankful because through it all, I’ve done nothing but learned. I’m able to relate to more people because I’m just the average Joe who decided to do things differently, one day, as a kid.”

He is so disciplined today, perhaps, in his workouts, dieting and even sleeping, because he knows how far he has come.

“His warmup lasts probably until the middle of practice, making sure his body is primed and ready to go,” Giants rookie Andrew Williams told the New York Post.

Jennings never eats anything from the Giants cafeteria—rather, he pays to have organic and gluten and casein-free meals dropped off at the team facility. And instead of purchasing, say, a new car after his first contract, he bought a hyperbaric oxygen chamber to sleep in once a day, which he says heals his body on a cellular level.

It took five years for Jennings to get to this point, and he is determined to do everything in his control to stay there.

“To the true heart of me, I love to learn,” Jennings says. “I’m a learner by nature. It’s enjoyable to me. Because of that, God has never allowed anything easy for me. God has always taken me through the furnace of everything—just because I learned through it…You never really stop learning.” 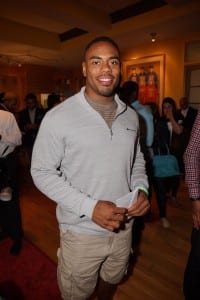 This learning, of course, applies to his spiritual life, as well.

“He asks a lot of questions,” says Giants cornerback Prince Amukamara. “He doesn’t do anything spur of the moment—everything is well thought out. Everything he says—he definitely thinks before he speaks. He has challenged me in my faith so many times. He makes me question why I believe what I believe in. Even though he’s a Christian, he asks questions. It’s great to learn from him.”

Since his youth, Jennings has shown a deep desire to learn. He used to be afraid to ask questions while reading the Bible because the concepts he learned at church seemed to imply that “if you questioned God, something was wrong with you.”

One day, however, when he was in junior high, he mustered the courage to ask his mother a question about the book of Job, from which Jennings quoted in-depth in his interview with Sports Spectrum. His question was rooted in Job 1:7 and 2:2, of which both read, “The Lord said to Satan, ‘Where have you been?’”

“With the story of Job, everyone kept talking about perseverance and sacrifice and so forth and so on. I only had one question,” Jennings laughs. “It’s silly because I was a kid. But I remember hearing the story and asking my mom about it. I said, ‘God knows everything, right?’ She said, ‘Yes.’ I said, ‘So why would he ask Satan where he has been? I don’t get it.’ That was the first time I asked a question.”

Jennings enjoys diving into the waters of spirituality, where knowledge has no depths, beckoning for a lifelong journey of God-discovery—where pleasure in Christ is so ineffable, He can be enjoyed throughout all of eternity.

“We aren’t perfect, not one of us is perfection,” Jennings says. “Only Christ is. It’s a journey and I mean that because it’s a daily devotion of growth, and you never get to the point where you figure it out. It’s tough sometimes, but the harder you work at something, the harder it is to surrender—that’s a quote from John Wooden.”

“But God is teaching me that He never withers. He’s still. He’s a man of order and principle. God is perfect. I’m learning something every day.”

This story was featured in Sports Spectrum’s first digital magazine of the Fall 2014. Log in HERE to view the issue. Subscribe HERE to receive 12 issues of Sports Spectrum a year.