Hall of Famer Tim Brown opens up about faith and struggles

As Tim Brown told the story of his journey during the Pro Football Hall of Fame induction ceremonies on Aug. 8, he mentioned a traumatic moment when he was six months old.

He had an infection, and had to go to the hospital. Doctors talked of doing surgery.

“My mom, my grandfather, and my uncle, they prayed,” Brown said that day as thousands listened to his induction speech. “The doctor gave me medicine, two hours later I was doing fine. And my mom said from that day on that she thought that God had something special for me. I don’t know if she thought it was this special, but she knew that God had something special for me.”

Nearly all of Brown’s football career, in high school, college and the pros, has been special. 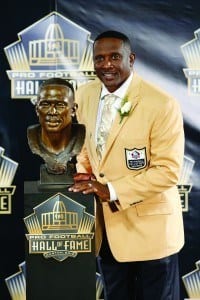 In high school, he was recruited by major college football programs despite his team’s 4-25-1 record in his three years as a starter. In college while at Notre Dame, he became the first wide receiver to win the Heisman Trophy. And in the NFL, he retired with the second-most receiving yards (14,934) in league history, was voted to nine Pro Bowls, and set Oakland Raiders records for receptions, receiving yards and punt return yards.

And, he earned his sport’s biggest honor when he was inducted into the Pro Football Hall of Fame in August.

“I think God gives you a talent for a reason, and if He touches your life to live for Him and certainly to do it on the middle of a football field, it’s an incredible opportunity to really get some heads turned,” he told CBN recently.

And what comes with turning heads, he told CBN, is a platform that he takes seriously.

“Everytime I go to talk to kids, that’s the one thing I leave them with—go to church, please go to church. You know, because in my opinion there is nothing more important you can do with your life. Education is great, but I tell them I know a lot of educated fools out there…but it’s the Word of God, and the Spirit of God that can keep you from being crazy and doing the things that we shouldn’t be doing.

“When I sung in the choir back in the day, there was a song we used to sing, a song called ‘God Is’ and the song started out, ‘God is the joy and strength of my life,’ and the song ended up ‘God is my all and all.’ And I think that’s what it all comes down to.”