Tim Shaw played 80 NFL games. He was selected by the Carolina Panthers in the 5th round of the 2007 NFL Draft after playing collegiate ball at Penn State. Over his 7-year career, Tim became known as a special-teams ace and was the Tennessee Titans special teams captain in 2011 and 2012.

In 2013, Tim Shaw was cut by the Titans at the end of the preseason in August. He never played in the NFL again.

One year later, Tim Shaw began a new battle. One that would see him fight for his life.

On August 14, 2014, he announced that he had been diagnosed with ALS, also known as Lou Gehrig’s disease. ALS systematically kills motor neurons that go from the brain to the spinal cord to muscles throughout the body. The more the neurons die, the less patients can control the muscles in their bodies.

This is the current chapter in my #life story. Praising God always. Stand strong and fight. #ALSIceBucketChallenge http://t.co/BOME61GXAh

Like he did during his football career, Tim has faced his ALS diagnosis with an intensity and a passion; not only to fight, but to inspire and be a voice to those who will listen.

On Sunday, Shaw’s story was featured at Cross Point Church in Nashville, TN, where he attends and worships Jesus each week.

Our friend Tim Shaw, former Titans football player, shared something today we ALL need to hear. "I am more me now than I’ve ever been, because I have to look at myself for what’s inside. If the last thing I do with my arms is raise them up to praise God, that would be the greatest thing I could do. I’m not a football player, I’m not a disease. My identity is the best friend of God.” #cpsummerfest

Shaw spoke of how his identity, for many years, was not found in his faith, but in his life as a football player. “You’re Tim the football player. And even though I knew in my heart, I’m a child of God, I let those labels stick on me.”

As he struggled with his identity, Tim says that in his time playing football at Penn State, and even during his NFL career, Christ took a backseat to his job.

“I never resisted God,” said Tim, “but He certainly was not first. Football was first and brought me everything I wanted.”

After being diagnosed with ALS, Tim says he started to believe that his identity simply changed from one 3 letter label (NFL) to another (ALS). But after the diagnosis, he began to examine his life and has now come to the realization that neither the NFL, nor ALS, defines him as a person.

If I could understand #God he wouldn't be much of a God and I wouldn't need him. #chewonthat#faith#religion#church

Shaw says that his faith in Jesus now is more important than ever, and that he has a desire to praise the Lord until he can’t do it anymore. 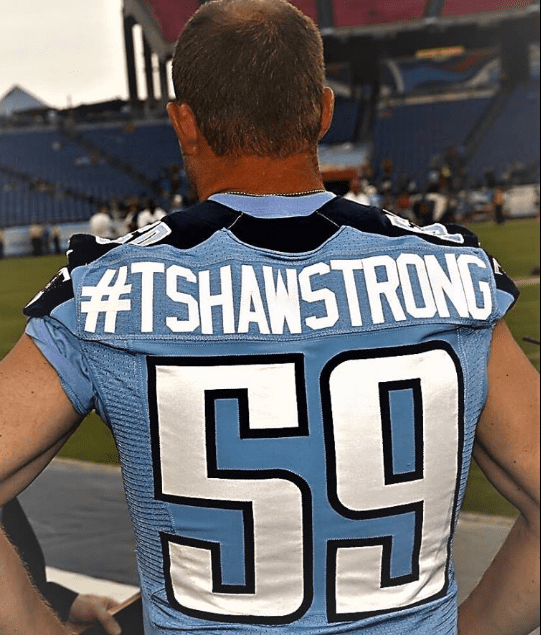 Tim Shaw is a child of God and wants everyone to know that he is living for an eternal purpose, greater than any pain, disease, or sickness that comes his way on this earth.

Tim’s first book “Blitz Your Life: Stories from an NFL and ALS Warrior”  was released earlier this year and is available now wherever books are sold.