On July 24, Eagles Carson Wentz will report to training camp and begin his second season as an NFL quarterback. Last year, as a rookie, Wentz proved he was worthy of the second overall pick in the 2016 NFL Draft by starting every game in Philadelphia and passing for 3,782 yards, 16 touchdowns and 14 interceptions. 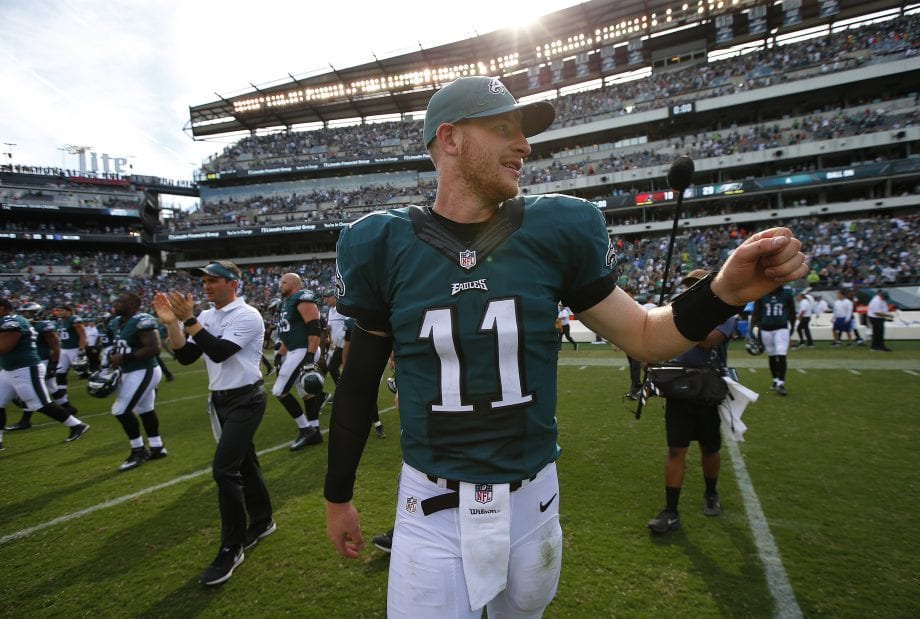 PHILADELPHIA, PA – SEPTEMBER 11: Carson Wentz #11 of the Philadelphia Eagles walks the field after defeating the Cleveland Browns 29-10 during a game at Lincoln Financial Field on September 11, 2016 in Philadelphia, Pennsylvania. (Photo by Rich Schultz/Getty Images)

But before he begins his second season of professional football, Wentz, an outspoken follower of Jesus Christ, recently shared a sermon at First Assembly Church in Fargo, North Dakota.

Fargo also happens to be the city where Carson played his college football at North Dakota State.

Wentz spoke to the congregation about salvation and quoted from Ephesians 2:8-10, which reads: “For by grace you have been saved through faith. And this is not your own doing; it is the gift of God, not by works, so that no one can boast. For we are God’s handiwork, created in Christ Jesus for good works, which God prepared beforehand, that we should walk in them.

“The myth in our world, in our society,” said Wentz, “and even in the church, is that if I just have faith in Jesus, and I do enough good, that I’ll have salvation. You see that’s wrong. The truth is faith alone in Jesus Christ is what equals salvation plus the works.”

Wentz went on to share about the importance as Christ followers to know that we all are on the same team. “It’s not just for the pastors to tell the world about Jesus,” said Wentz. “They can’t reach the majority of people that we can. We all have to work together to make a difference.”

Carson also shared about a recent mission trip he went on in Haiti where he ministered to families and children and shared the love of Jesus with them.

So thankful for @mohhaiti & the amazing work they do for the people of Haiti! They truly are changing lives for God's kingdom! Praise Jesus! pic.twitter.com/uaym0DYKN1

Wentz said this experience really opened his eyes to how we evangelize and share our faith with others that we come in contact with in our everyday lives.

“We were sharing the gospel through a translator in another language, traveling across the ocean to do this,” said Wentz. “I just did all of this to share the gospel but I can barely turn to the guy sitting next to me in my locker room and tell him about the gospel.”

“It was an amazing experience,” said Stephen Glasser, Campus Pastor at The Shift. “Over 1,000 people attended our service and over 5,000 people have since watched online. I was so excited, because people got to see the true Carson. He is truly “all in” with God and people got to see his simple love for Jesus on display.”

Glasser, who has known Wentz since Carson’s college playing days at North Dakota State, said that after the service and the cameras stopped recording, that is when something truly amazing took place.

“Upon his request, Carson and I prayed with people for over an hour following the service,” Glasser said. “The night was a major success. Many people dedicated their lives to Christ and we are continuing to hear stories of what God did in people’s lives. It was never about Carson and it was never about our church. It was about giving people a real glimpse of the Gospel and a chance to respond to the love of Jesus.”

Carson wants to win football games. He wants to reach a Super Bowl. He wants to be the best football player he can. But even more, he wants to impact people for Jesus Christ.

“Jesus died on that cross so that we can have eternal life with him,” said Wentz. “We need to be intentional about our conversations. At the end of the day, I need to think, What have I done for the kingdom today? Who have I impacted? Who have I talked to?”

You can't earn grace. It's free. It's the greatest gift there's ever been & will be. Accept it.

Jesus is waiting for you & loves you #AO1

Carson went on to say that playing for an audience of one is something we can all instill into our daily lives.

“We all have a different mission field, but we all have the same mission. It’s to spread the gospel.”

Wentz is just 24 years old and hopefully has many years remaining as the signal caller for the Eagles, but he better be careful, because God may have plans for him to be a pastor or preacher someday as well.