By Jason Romano Aug 6, 2017
Kurt Warner during an NFL game with the Rams in 2000. (Photo Courtesy: Sports Spectrum/Tom DiPace)

But God had other plans.

On Saturday Night, Warner took the stage in Canton, Ohio and joined NFL royalty in accepting his enshrinement into the Pro Football Hall of Fame.

“People say Hollywood couldn’t have written it any better,” said Warner. “After this, they don’t have a chance.”

Warner has always given God the glory in all that he has accomplished, starting with that moment in January of 2000 when he accepted the Super Bowl MVP trophy and shared with the entire world, his faith in the one who created him.

“First things first, I’ve got to thank my Lord and Savior up above – thank You, Jesus!”

In 2008, when Warner took the Cardinals to the Super Bowl for the first time in their history, he once again found himself on the stage accepting the NFC Championship trophy and he once again stood there unashamed of his faith in Christ.

“Everybody is going to be tired of hearing this, but I never get tired of saying it,” said Warner back in January of 2009 after defeating the Eagles to advance to Super Bowl XLIII. “There’s one reason I’m standing up on this stage today, that’s because of my Lord up above. I got to say thanks to Jesus.”

Warner spent the majority of his Hall of Fame speech on Saturday Night showing gratitude to everyone who helped him along in his journey to Canton. But it was at the end of the speech, that he thanked the person most responsible for his success.

“And the only place this extraordinary journey can end,” said Warner. “His final moment was for me. Mine is for him. Thank you Jesus.” 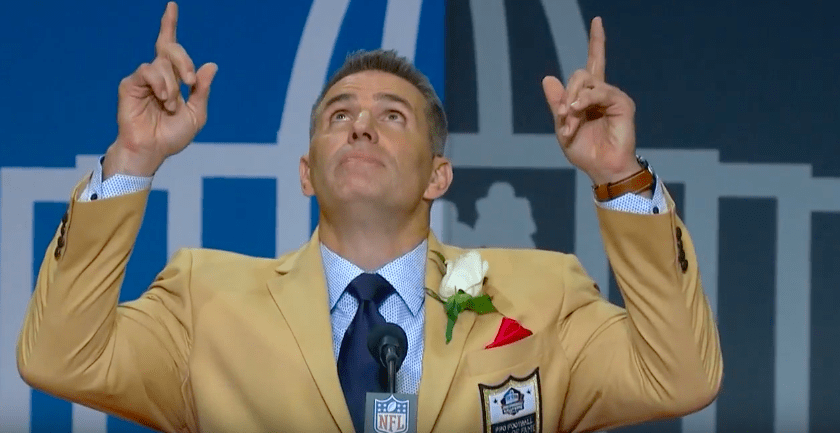 Warner was featured in our November/December 2000 issue of Sports Spectrum magazine and even then, knew that his journey to the NFL wasn’t just a lucky break.

“It wasn’t just being lucky or having all these bad breaks and finally getting a good break, Warner told us back in 2000. “It was about how the Lord used my whole situation …. I could really take no responsibility for the position that I had, the platform that He gave me.”

He may not have the most touchdown passes, the most passing yards, or the most Super Bowl wins, but Kurt Warner might have the most improbable story of any player ever to enter the Hall of Fame.

You can watch Kurt Warner’s Hall of Fame speech in its entirety here.