There are plenty of Scriptures that talk about things athletic, from running the race to building your body for battle to the first mention of baseball in the Bible (Genesis 1:1: “In the big inning, God created the heavens and the earth.”). Okay, that last one may be a stretch, but the drive to be a well-tuned athlete is very similar to the drive to be a strong follower of Jesus Christ.

One of the most popular verses, not just for athletes but for a lot of people, is Philippians 4:13. In that passage, Paul states, “I can do all this through him who gives me strength.”

So if you make your living in sports, especially in the area of strength and conditioning, of course your favorite verse is going to be Philippians 4:13.

Not if you’re Earl Chevalier. 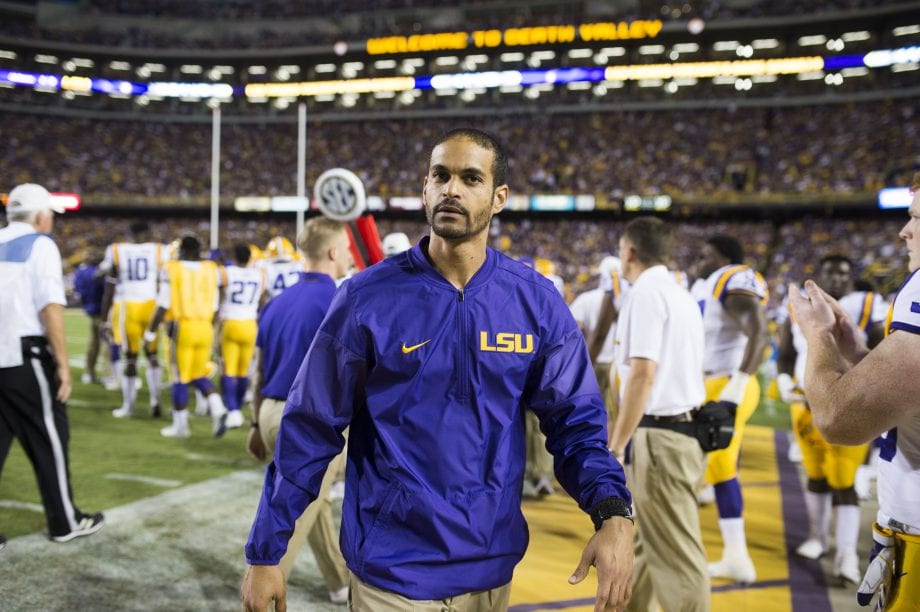 “I like that one, but I really love 1 Corinthians 13, where Paul talks about love,” said Chevalier, the assistant strength and conditioning coach for LSU. He works with athletes from women’s golf and gymnastics, and quarterbacks and wide receivers for the football team.

“Love conquers all things,” he said. “It endures all things. If you think about athletics, you can have all the other attributes of athletics, but if you don’t have love you’ll fail. In football, if my tight end is worried about what the center is doing, we’re not going to be successful. But if the tight end does his job, and the center does his job, and the other nine guys do their job, we all succeed.

“I love the way Paul talks about the human body and how when one part of the Body is successful then we all are successful. Christ Jesus is the head and we are His body. We have to operate through Him for one another. We have to love one another to be able to do that.”

Chevalier is a lifer at LSU. He arrived on campus as a freshman in the fall of 1998, and he never left. He was hired as an intern with the strength and conditioning staff in January 2002, and he was hired full-time in January 2007.

His is an interesting mix of sports. One might not think that golf, gymnastics and football have a lot in common, but Chevalier thinks they do.

“Women’s gymnastics and golf are both rotary sports, and you have the same movement patterns that the quarterbacks and receivers have,” he said. “I have gals who don’t run but twist and turn, gals who do run and twist and turn, and guys who run a lot, and they have to twist and turn a lot.

“I have a 16-year-old daughter. The female sports I have helped coach have helped me coach her, because I understand more than the physical side. I understand how to motivate women differently than motivating men. That has changed my philosophy in strength and conditioning, and in training.”

What hasn’t changed is his focus on the whole person. He tells recruits and their parents that he doesn’t care what their golf handicap is, or how many perfect 10s on any event they can achieve, or how far they can throw the football, or how many yards they can gain with passing or catching the ball. What matters most to him is who you become as a person.

“I tell the parents that I am going to train the physical, mental, emotional, moral, and if you allow me to, the spiritual,” he said. “If I just train the physical, I’m missing 80 percent of who that person is. With the exception of baseball, where 33 percent success is really good, missing 80 percent of success is unacceptable. I can’t miss out on the 80 percent of who that person is. I tell the kids that all the time. God isn’t going to ask me how many pounds my athletes lifted. He’s going to ask me how I helped them improve as people.”