Week 2 of the NFL season saw some impressive performances. The Denver Broncos routed the Dallas Cowboys and the New England Patriots rebounded from their Week 1 loss behind a 400-yard passing day from Tom Brady.

Here are the five best performances from Sunday’s games.

Tom Brady (30-39, 447 yards, 3 TDs) – So much for getting those retirement papers ready. The five-time Super Bowl champ tore through the New Orleans Saints for 447 yards and three touchdowns. Brady joined Warren Moon as the only QBs age 40 or older in NFL history to pass for at least 400 yards and three TDs in a game, according to the Elias Sports Bureau.

Denver Broncos defense (2 INTs, 1 TD) – Not even a 62-minute weather delay could stop the Broncos from dominating the Dallas Cowboys. Denver’s defense held Dallas running back Ezekiel Elliott to a career-low eight yards on nine carries, sacked Dak Prescott twice, and picked him off twice in a 42-17 rout at Sports Authority Field at Mile High.

"Cause if I do this by myself, I'm scared that I'll succeed And no longer trust in You, 'cause I only trust in me" You take the lead! #TeamJesus #AO1 ??

Baltimore Ravens defense (5 forced turnovers, 3 sacks) – The Baltimore Ravens honored the 2000 Super Bowl-winning squad on Sunday, and the current team did its best impersonation of one of the NFL’s all-time best defenses. The Ravens grabbed four interceptions and recovered a fumble in the 24-10 win over the Cleveland Browns. Baltimore has a league-high 10 takeaways and has a great chance to improve that number against the turnover-prone Blake Bortles and the Jacksonville Jaguars this week.

Travis Kelce (8 receptions, 103 yards, 1 TD) – The Kansas City Chiefs remained unbeaten behind a defense that sacked Philadelphia Eagles quarterback Carson Wentz six times and had their tight end do this…

Kelce’s touchdown was his first of the season as the Chiefs beat the Eagles 27-20. If you’re looking for another reason to cheer for Kelce, other than for padding your fantasy football stats, he’ll make a donation to charity for every catch he makes this season.

Derek Carr (23-28, 230 yards, 3 TDs) – The Oakland Raiders improved to 2-0 for the first time since 2002 in a 45-20 dominating performance over the New York Jets. Carr tossed three touchdown passes, all to receiver Michael Crabtree.

They weren't ready.@kingcrab15's *second* first-half touchdown was a beauty: pic.twitter.com/48gKDdkVet

Carr will lead the Raiders into our nation’s capital to take on the Washington Redskins on Sunday night.

Great start #RaiderNation !!! On to the next one!!! Recover, prepare, compete! #GloryToGod

DeShaun Watson – Any time you lead your team to your first win as a pro, you’ll get included here. Read about how Watson gave glory to God after his landmark victory. 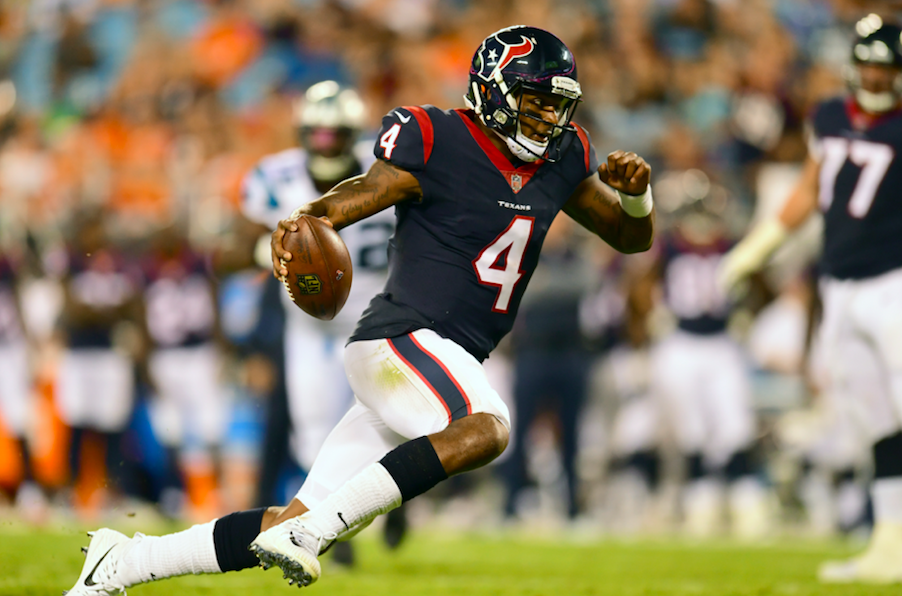