By Jason Romano Oct 18, 2017
Quarterback Carson Wentz of the Philadelphia Eagles during a September 2017 game against the Washington Redskins at FedExField in Landover, Maryland. (Photo Courtesy: Keith Allison/CC License https://creativecommons.org/licenses/by-sa/2.0/legalcode

According to Dick’s Sporting Goods, Eagles quarterback Carson Wentz’s number 11 is the top selling jersey in the NFL right now.

Dick’s posts a weekly ranking of jersey leaders based on sales at all their stores, and this week’s ranking shows Wentz ahead of Patriots QB Tom Brady and Cowboys QB Dak Prescott. 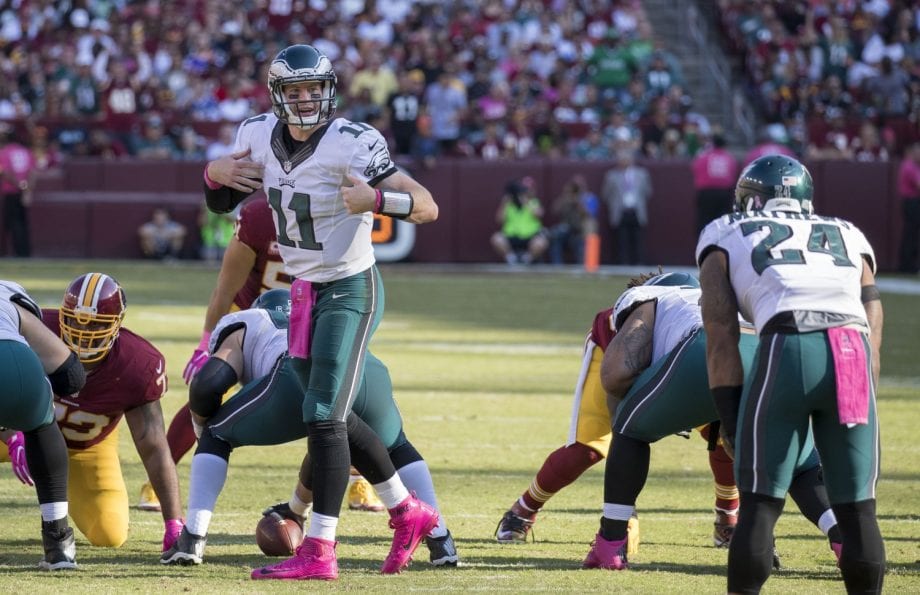 Quarterback Carson Wentz (11) of the Philadelphia Eagles during a game against the Washington Redskins at FedExField on October 16, 2016 in Landover, Maryland. (Photo Courtesy: Keith Allison/CC License
https://creativecommons.org/licenses/by-sa/2.0/legalcode

Wentz, an outspoken Christian, has made it his priority during his 2 seasons in the NFL to play for an Audience of One, Jesus Christ.

“It was kind of a motto I picked up early in my career, and I finally put it on my body just to live the Lord as my audience,” Wentz told the Inforum in April of 2016, “whether it was playing football, going to school or whatever I’m doing in my life.”

In July, the 24-year-old Wentz shared a message from the pulpit of a North Dakota church. He spoke on salvation and the need for a savior.

“The myth in our world, in our society,” Wentz said in July “and even in the church, is that if I just have faith in Jesus, and I do enough good, that I’ll have salvation. You see that’s wrong. The truth is faith alone in Jesus Christ is what equals salvation plus the works.”

Wentz has been a spiritual leader for an Eagles team that has seen players get baptized, both at the team facility in 2016 and at hotels on the road, as teammate Marcus Johnson did last week.

The Eagles are currently tied with the Chiefs for the best record in the NFL at 5-1. Wentz has been spectacular 6 games into his second season and is an early MVP candidate.

Wentz’s 1,584 passing yards is ranked 5th in the NFL and his 13 touchdown passes is tied for second. There is a lot of NFL season left to be played, but the Eagles staff, their players, and their fans, have to feel good about their quarterback now and for the future.