Jeff Saturday - Too Good Not To Be True

The following article is featured in the September 2017 edition of Sports Spectrum Magazine. To join us and become a member of the Sports Spectrum family and receive our quarterly magazine, click here.

Too Good Not To Be True

Jeff Saturday’s story sounds too good to be true. Small town boy makes good—real good—and returns to give back to the community.

Except it is true.

Saturday grew up in Tucker, Ga., in the suburbs of Atlanta. He admits that he was not much of a college prospect earl in high school, much less a guy who could play 14 years in the NFL and make the Pro Bowl six times. The investment of a group of coaches changed his life forever.

“My football coach was Ron Gartrell,” Saturday said at a recent CTO conference. “My baseball coaches were Coach Jeff Rowland and Coach John DeVore. Coach Mike East was an assistant football coach and my wrestling coach. And Coach “Cookie” Ramos coached me on the offensive and defensive lines.

“Those guys impacted my life to such a strong degree. If they saw me veering off the path and making the wrong decisions, hanging out with the wrong crowd or jeopardizing my future, they steered me back on track. At the time, no one thought I had a future in athletics. They didn’t see a future professional athlete, or even a college athlete. They just saw me as a kid they were coaching in high school.

“They cared so much. My parents divorced early in my life, so they added a big male presence in my home at that time. Those guys impacted me so much. They showed me what a man should look like.”

Saturday credits Gartrell with helping him get noticed by college programs. “He stood in the gap for me when there wasn’t a lot of interest in me,” Saturday said. “Watching someone be so selfless in their efforts to bless someone’s life meant so much to me. He inspired me to do the same thing, to be a coach.”

Before Saturday became the head coach at Hebron Christian Academy in Dacula, Ga., not too far from Tucker, he had a lengthy journey, first to the University of North Carolina and then on to the NFL. He was not drafted, but was signed as a free agent by the Baltimore Ravens. His draft prospectus described him as “somewhat (of) an overachiever, has worked to make himself better,” but also as “an undersized guy (who) simply has trouble matching up against power (nose tackles) that can overwhelm him.” 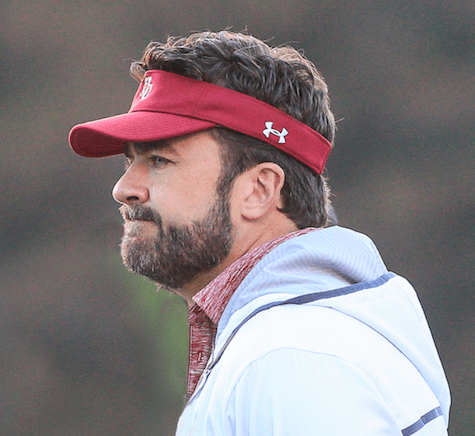 He was released by the Ravens and was out of football before signing with the Indianapolis Colts prior to the 1999 season. He spent the next 13 years with the Colts, mostly shuttling the ball through his legs to Peyton Manning. He went to the Pro Bowl in 2005, 2006, 2007, 2009 and 2010 representing the Colts. In his final season (2012), he went to the Pro Bowl as a member of the Green Bay Packers.

“With all the great coaches I’ve had, including Tony Dungy, Clyde Christensen, Jim Caldwell, Jim Mora, Mike McCarthy and Howard Mudd, X’s and O’s don’t mean a thing,” he said. “I don’t ever think of them as profound coaches in terms of the game. The thing they all did was believe in me when I didn’t believe in myself. Even when I was scared that I couldn’t do something, they believed that I could, and they inspired me to do it.

“With those type of men, you know they care. It was not just being good on the field. They knew we would have some good days and some bad days. In the end, they cared about me as a person, developing me as a man. However good you are, there’s still life after you walk off the field. That’s true for everybody.”

It’s that message that he passes along to his players. Interestingly, he feels his biggest challenging coaching at a Christian school is sharing his faith and having it make an impact. “My biggest fear is that Christ becomes common,” he said. “I don’t want that to happen for them. I want them to understand how powerful Jesus is.

“They hear it a lot at Christian school. It always concerns me that they will take Him for granted. You have to have a personal relationship with Him, and I’m here to help them with that. These kids probably haven’t had the experiences that make them desperate for Christ. The reason I came to Christ, and the reason you came to Christ, is that we saw a need for salvation. You can’t depend on other peoples’ faith. It has to become yours.

“I tell my players that it’s not about your parents or anyone else. It’s about you knowing who Jesus is. When something goes wrong, or when you have to make a life-changing decision, you have to have that relationship.”

That’s another point that’s not too good to be true.