10 years ago, February 3, 2008, the greatest play in Super Bowl history took place when New York Giants wide receiver David Tyree made the infamous “Helmet Catch” to help lift the G-Men to a 17-14 win over the undefeated New England Patriots.

Today we look back at a conversation we had with David back in 2008, months after he became a Super Bowl hero.

This article was originally published in the Fall 2008 edition of Sports Spectrum magazine.

The Catch and Other Miracles — by Jeff Smith

David Tyree had made only four catches all season, so making perhaps the biggest catch in Super Bowl history would seem like a miracle.

Flash back to early February and Phoenix Stadium. Super Bowl XLII was all about the 18-0 New England Patriots and how they would be remembered as possibly the NFL’s greatest team ever. But in the final moments of the game, New York Giants quarterback Eli Manning escaped a furious rush and flung a ball that Tyree caught falling backward with the ball between his hand and helmet and a defender covering him like a blanket.

“From top to bottom that play was a complete miracle,” said Tyree, who also scored the Giants’ first touchdown on a pass from Manning. “I’m grateful to be a part of history from that standpoint. I think it’s the greatest play.”

A few plays later, Manning tossed a touchdown pass to Plaxico Burress and the Giants recorded a major upset. But don’t be surprised that Tyree was part of the miracle. David Tyree’s life has been nothing short of miraculous.

“Alcohol stepped into the picture around age 13 or 14,” said Tyree. “That is sort of what I saw [growing up] so I got into it pretty early. By the time I got to junior high school I would drink a 40 ounce or smoke a blunt of marijuana.”

Even though Tyree was not the greatest athlete on the playing field, he worked hard and impressed his coaches through high school. But bad habits started to catch up to him while at Syracuse University and continued right into the NFL.

“By the time I got to college I got to the point of binge drinking. I started to black out and not remember things that happened,” said Tyree. “I was waking up in bathrooms not knowing who i slept with — just some really scare moments. I never really had the courage to seek God and find out who I was in my own life other than allowing drinking to mask who I really was.”

“I found out that when money entered the picture in my first year in the NFL I could smoke as much as I wanted and drink more alcohol. And now my character was beginning to get exposed. You can be an NFL athlete and not understand the ramification of being in the spotlight.”

Everything came to a screeching halt when Tyree was arrested on marijuana possession. From Montclair, New Jersey, to the NFL to the jail cell — not the kind of storybook ending Tyree had envisioned. But at that point the plot took an amazing turnaround.

“When I was in that jail cell I cried in my heart and said, ‘God, I need you. All I know is that I need you right now and if You allow me to keep my job I’d appreciate that too,'” said Tyree.

Tyree did get to keep his job but in his own words was still a “functioning alcoholic.” Then another change took place. A little while later, he grabbed a 12-pack, drank one beer, picked up another and then lost his taste for alcohol and marijuana.

“I walked into my church, and I saw this woman singing to God. She had all the joy and peace in her heart,” remembers Tyree. “I thought to myself that I was named to all-NFL special teams as a rookie and I didn’t have any peace, didn’t have any joy, any contentment. I wept for about 40 minutes and gave my life to to Christ.”

He eventually married his longtime girlfriend, Leilah, with whom he had two sons. His career with the Giants got back on track and David wavered between the third to fifth wide receiver.

But if you think everything started turning up rosy once David became a Christian, think again. His 2007-08 season mirrored his early struggles in life.

Tyree missed the first two games of the season due to injury, something not uncommon to the team. As many as 20 other Giants were on injured reserve. But while out, David wrote a letter to the team and placed one in every locker.

“I don’t believe in luck. I believe in blessings and cursings. I saw it as something spiritual,” said Tyree of what was in his letter. “Basically, I had a dream and there was a dark cloud over the Giants organization. I felt the unction of God to encourage the guys. I believe there was something coming against the destiny of this football team, and I began to pray and ask God to break up some stuff. He was faithful and got our team on the right track.” 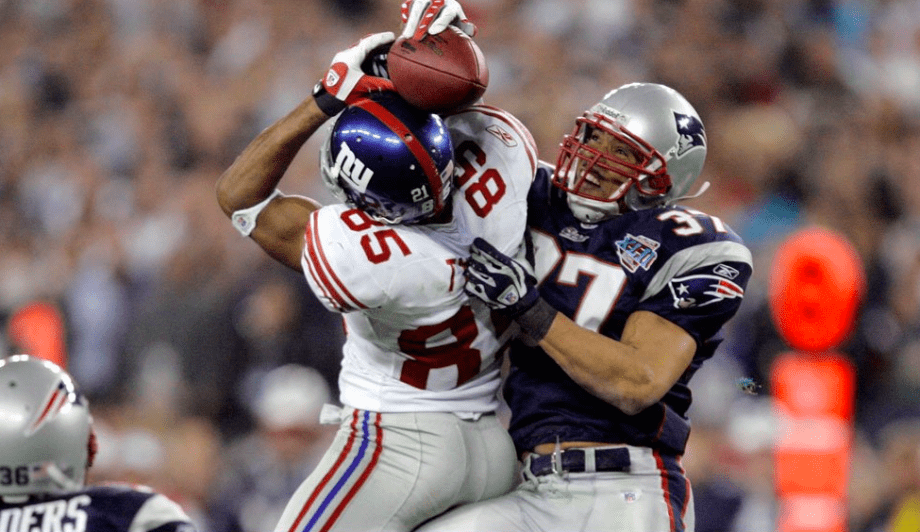 David was a seldom-used target most of the season, but he hung on by faith to what a friend had told him.

“A friend of mind, by the unction of God, told me that God was going to make my name great as a wide receiver,” said Tyree. “This was early in the year. I had only four catches during the season. Literally, I’m holding on by faith to what I know God can do.”

“Then my mom (Thelma) passed during the end of the year. I have assurance that she had a personal and real relationship with Christ. That gave me a lot of joy along with the pain.”

Then came the playoffs and God showed up and showed out for David.

Did success in the postseason surprise Tyree? Through five seasons, he had caught only 54 passes and was most known for his play on special teams.

“The only thing surprising was the magnitude of the catch. I take great pride in going out there, doing my job to the best of my ability, and helping my team win football games,” Tyree stated. “I’m not surprised from that standpoint. The Catch, or whatever you want to call it, was of God. You give me my best day in the prayer closet, and I wouldn’t be able to sort that one out.”

Along with The Catch has come enormous popularity and responsibility. Tyree realizes that God has given him a platform. With that he shares the truth about hsi life and that God is interested in others’ lives.

“Godliness with contentment is great gain,” Tyree said. “So many times and so many year I’ve been trying to prove to everybody that I can play wide receiver — that I’m not just a special teams player. I was still content. He allowed this wonderful thing to happen, and He elevated my name as a wide receiver in the eyes of the world.”

David plans on competing for the third receiver spot for the defending champions this season. And he has no problems with the experts who are once again not picking the Giants to repeat.

Good things comes in twos for the Tyrees. Two weeks after the Super Bowl, Leilah gave birth to twin girls. So can the Giants win back-to-back titles?

“I don’t think anybody has picked us to win anything in the last 10 years,” said Tyree. “Right now, we’re world champions. I think we’ve got a great amount of talent, as much as I’ve ever seen.”

The New York Giants came from nowhere to win it all last season, and David Tyree came out of the shadows and into the spotlight.

“There’s a scripture that kind of summarizes my life. He has called you out of darkness into His marvelous light. It’s from not even having God on my mind to a point where He not only saved me into the light, but He caused me to be a light to other people. God can use the littlest thing.”

Even if that little thing happens to be The Catch.