On this date 20 years ago, football fans around the world were glued to their televisions. It had all come down to this: the entire season riding on one play.

Down 23-16 in Super Bowl XXXIV, the Tennessee Titans had to score a touchdown from the St. Louis Rams’ 10-yard line with only six seconds remaining in the game. Legendary Titans quarterback Steve McNair had just led his team the length of the field to put Tennessee in position to tie the game and send the Super Bowl to overtime.

The play call was to draw Rams linebacker Mike Jones out of position, freeing Titans receiver Kevin Dyson on a slant pattern. The play seemed to work to perfection, yet as McNair delivered the pass to Dyson, Jones changed direction and was there to make a Super-Bowl-saving tackle.

Dyson stretched the ball toward the goal line but came up one yard short, the iconic image memorialized forever. The final play was a fitting ending for one of the most exciting games in Super Bowl history. 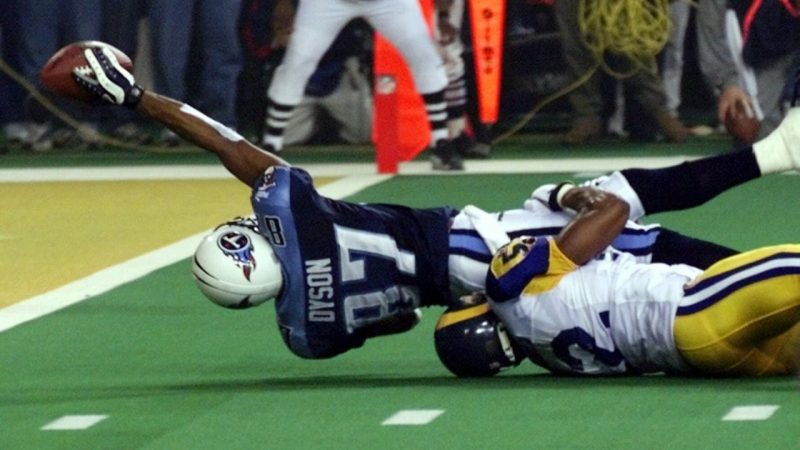 Tennessee Titans wide receiver Kevin Dyson (87) tries but fails to get the ball over the goal line on the final play of Super Bowl XXXIV, Jan. 30, 2000. (AP Photo/John Gaps III)

The victory was the Rams’ first-ever Super Bowl title, in a year when many expected them to finish toward the bottom of the NFL. Much of the Rams’ unexpected success during the 1999 season can be attributed to Kurt Warner, who took home the Super Bowl MVP with 414 passing yards and two touchdowns.

Only two years before Warner’s triumph, he was playing for the Iowa Barnstormers of the Arena Football League. He was a first-team All-Arena performer in 1996 and 1997 and impressive enough that the Rams signed him as their third-string quarterback.

He was second on the depth chart behind Trent Green at the start of the 1999 season, but when Green went down with an ACL tear in the preseason, Warner was named the starter.

Surrounded by offensive weapons like receivers Isaac Bruce and Torry Holt and running back Marshall Faulk, Warner put together one of the best seasons by a quarterback in NFL history. He threw for 4,353 yards and 41 touchdowns with a 65.1 percent completion percentage. Warner’s performance earned him the league MVP (the first of two in his NFL career) and vaulted St. Louis to a 13-3 regular-season record.

After his Super Bowl-MVP performance, Warner was not shy about praising God.

“First things first,” Warner said on the postgame stage, “I’ve got to thank my Lord and Savior up above — thank You, Jesus!”

Warner spoke of Christ often throughout his career. He said his time in the AFL was when God truly solidified his faith. In a story from Sports Spectrum Magazine in 2000, he said the time he spent in football obscurity helped him to see the power of God in all circumstances.

“It wasn’t just being lucky or having all these bad breaks and finally getting a good break,” he said. “It was about how the Lord used my whole situation … I could really take no responsibility for the position that I had, the platform that He gave me.”

Nine years after his bold declaration at the Super Bowl, his Arizona Cardinals punched their ticket to Super Bowl XLIII. Warner again pointed to God from the victorious postgame stage.

“Everybody’s going to be tired of hearing this, but I never get tired of saying it. There’s one reason that I’m standing up on this stage today,” Warner told FOX’s Terry Bradshaw. “That’s because of my Lord up above. I’ve got to say thanks to Jesus; You knew I was going to do it, but I’ve got to do it.”

Warner’s faith in Christ helped define his playing career, and that only continued after his retirement in January 2010.