For Maggie Malone, it seems that God has opened all the right doors at the perfect times throughout her life.

A 2016 Olympian in the javelin, Malone is five years older — and five years stronger in her faith — as she prepares to compete in the 2021 U.S. Olympic Trials in Eugene, Oregon, this week (women’s javelin qualifying begins Friday, with the final on Saturday). Her sights are aimed on Tokyo, but her eyes are looking much higher.

“God has had a plan, and I’m just along for the ride because He has shattered every expectation I had for myself for this season,” Malone recently told Sports Spectrum.

Though anything can happen in the sport of track and field, many media members believe Malone is a lock to make the U.S. Olympic team. After all, since May 30, she has been the American record holder in the event (pending ratification), after she launched a throw of 66.82 meters (219 feet, 3 inches) at the USATF Chula Vista Field Festival, taking down Kara Winger’s previous American record of 66.67 meters from 2010.

“I heard my coach yell, ‘Go 70 meters!’,” Malone recalled. “I was like, ‘What in the world are you talking about?’ But then to have it come back as 66.82, I was just absolutely surprised. I knew what the record was and thought maybe that was the next step, but maybe in a couple years I could get that; certainly not this year.”

She actually thought the record was “untouchable” for her in 2021, so her aim was 64 meters. Maybe with some help from Winger, 66-plus would be possible in the future.

“Kara Winger is one of my role models and a friend. I just thought 66 meters was unattainable for me,” Malone said. “All I wanted was to hit 64 [meters]. I ended up jumping three meters from my throw at the previous meet. Only God could do that.”

And only God could have led Malone back to the sport after she gave it up for a full year just three years ago.

Growing up in the town of Geneva, Nebraska, with a population of 2,071 and a place where specializing in just one sport was unheard of, Malone was truly an all-round athlete. She played it all in high school: volleyball, basketball, softball, track and field. But amazingly, she never competed in the event she now excels in. The javelin was not, and still is not, contested at the high-school ranks in Nebraska due to safety concerns.

Her introduction to the javelin came at the University of Nebraska, where she was recruited as a heptathlete. Since birth, she had been donning the red and white of the Huskers, as her father, Danny, played football on Nebraska’s 1970 national championship team, and her mother, Nancy, was an All-American in track in 1982.

“Kris Grimes [then an assistant coach at Nebraska] came to one of my volleyball practices in Geneva and told my mom, ‘I don’t know what it is about her, but we want her,’” Malone recalled when talking of her recruitment.

Long before that conversation, however, it appeared Malone’s chances to follow her parents to greatness as an athlete would be nonexistent. When she was in kindergarten, she broke her femur and chipped a growth plate, leaving doctors unsure if her leg would ever grow again.

“God was at work in my life,” Malone said. “To be honest, I don’t remember a whole lot of it. But I look back, and I’m like, ‘Wow God, I could’ve had a whole different story. And for whatever reason, You placed this doctor in my family’s path.’ He fixed me. The other doctors wanted to stunt my other leg, so that I would be little the rest of my life. [God] orchestrated all these things, and divine intervention, absolutely, for my parents to say, ‘We’re not going to believe this doctor, we’re actually going to choose another option.’”

“Prior in my life, if a number that I threw was not up to my standard, I would crumble. I’ve worked really hard on saying, ‘My identity is not attached to whatever I throw, it is found in Christ.'” — Maggie Malone

The Lord opened yet another door for Malone nearly 13 years later, when she crossed paths with the javelin. Having never competed in the event before, she was forced into it as she trained to be a heptathlete at the college level. While Malone never appeared in the heptathlon at Nebraska, she quickly separated herself as one of the nation’s best in the event that has allowed her to reach professional status.

“I had a good background in softball and volleyball, so I think I had natural throwing mechanics,” Malone said when asked about her first experiences with the javelin. “My dad was a great pitcher also. So I think naturally, growing up, throwing the ball to each other and playing catch helped develop those skills.

“Being recruited in the heptathlon, it was seven different events, one of them being the javelin. I was good at long jump, but I really wasn’t that great at the other events. Kris Grimes taught me how to throw the javelin. He saw something in me and gave me a chance. I can see God orchestrating things for my life, even back then. Had Kris never given me a chance, I never would’ve learned the javelin, which would’ve never put me on the path to where I am now.”

On that path was a phenomenal 2016 year, in which she became the first-ever javelin thrower to win the NCAA title and the U.S. Olympic Trials in the same year, putting her name on the map as she headed to Rio de Janeiro for her Olympic debut. She had transferred to Texas A&M prior to her junior year in 2015, and with the coaching of Juan “Chico” De La Garza, soared to new heights.

“I think one of the most memorable moments was when I hit the Olympic standard at NCAAs and set the collegiate record,” Malone said. “I think that memory is so ingrained in my being at this point, because I did it with my sister, my whole family was there, Chico was there. Honestly, that sticks out more to me than making the Olympic team at the trials. Because when you get to do it with the people around you, and my sister had just thrown the best she’d ever thrown, it was the best day of my life.” 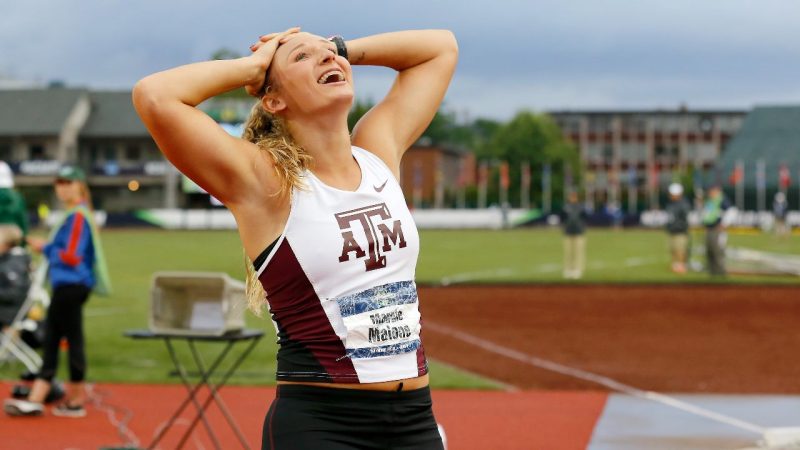 Competing at the Olympics, however, also yielded several memories.

“The first time I entered the village was incredible, and understanding, ‘Holy cow, I’m here with the best athletes in the world and you get to learn from them and talk to them,’” Malone said. “I think a moment I’ll never forget is being in one of our hangout rooms and having Allison Felix next to me and Ashton Eaton there, two athletes that I literally looked up to my entire life, and having conversations with them, and cheering for the United States all together. Even if we didn’t know who the athlete competing was personally, having USA across the chest and being so unified is something I won’t forget.”

She is on pace to wear USA across her chest once again this summer, with just one meet standing in the way — the Olympic Trials. Her journey to this point has been one of ups and downs, of transferring from Nebraska to Texas A&M, and walking away from the sport completely in 2018.

“After 2016, it really was a hard point in my life,” Malone said. “I was going through some injuries and mental health issues, and a lot of it was wrapped in my identity as ‘Maggie Malone, the Olympian.’ I didn’t like that, and I didn’t want to be known as that. I was struggling with competing and angry with myself for how I performed at the Olympics (she did not advance to the final). There were a lot of unknowns, and I wasn’t performing well, and that led me to hate the sport, and not want to be a part of it anymore.”

But God had different plans for Malone’s life. She had unfinished business as a competitor, and though she had continued training, she was not fully committed.

“I would always still train and work out, but I wasn’t fully in,” Malone said. “That’s the one thing I’ve figured out with anything in life, is that you have to be fully bought-in in order to be successful. After 2018, I sat down with my boyfriend, Sam Hardin, who is a great javelin thrower and coach, and he said, ‘Maggie, you’re not done with this sport. I know you have more.’”

She has proven him right. And she enters the trials with momentum after breaking the American record less than a month prior. But her mentality has changed. And her identity is no longer wrapped in her performance as a thrower.

“I have worked a lot with my mental coach on having high intention, low attachment, meaning that I intend to compete to the best of my ability, but I’m not attached to the number on the scoreboard,” Malone said. “That was a big step for me because prior in my life, if a number that I threw was not up to my standard, I would crumble. I’ve worked really hard on saying, ‘My identity is not attached to whatever I throw, it is found in Christ.’