Kyle Snyder is a 25-year-old Olympic gold-medal-winning wrestler who will look to defend his title this summer in the 97-kilogram (214 lbs.) freestyle weight class at the Tokyo Olympics. He was the youngest American to ever win an Olympic wrestling gold, and that came after titles at the NCAAs and world championships within the previous 12 months. His many accomplishments have earned him the nickname “Captain America,” but Snyder has said time and time again that his sport does not define him. Below, he shares his story about how Christ has increased in his life.

When I found out the Olympics would be delayed last year, I knew there was nothing I could do about it. I was feeling ready to compete then, and had just gotten back from the Pan Am Championships, where I had wrestled well. But when the delay was announced, I knew God was in control. If God is relaxed, then His children should be too. There’s nothing to be stressed out about.

So I continued to work on what I could work on. It was cool to be able to spend that extra time with my family and my wife’s family. It brought us back together, and it’s not often that we don’t have much going on. I was thankful for it.

But ever since I got back into training mode, my approach for the Tokyo Olympics has been similar to the last time I went to the Olympics in 2016. At every tournament I’ve gone to, my expectation is to win, and not just win but dominate. I’m not looking to have any close matches, even in the semifinals or finals.

I believe God’s given me these gifts and He wants me to compete in a dominant way. It’s up to me to be faithful and train to get ready for competition. Having said that, I don’t feel any pressure in regards to defending a title. That Olympic gold medal is from five years ago; I’m not worried about that. I’m more focused on what’s happening right now.

There have been a lot of changes since the last time I was at the Olympics. When you get to a high level, the changes are pretty small but it’s been good to be in a different room with different philosophies to where everything is new again. To have that freshness is important. All of that makes me ready for the Olympics this year.

In the past year, I moved from the Ohio Regional Training Center to Penn State. I was learning a lot of technique and mindset things. It’s one thing to apply these concepts when you are training, but it’s another thing to apply them in competition, and that takes time. I was able to use the down time to visualize myself in competition and practice that on high-level training partners, so now I feel like I’m really starting to get used to these techniques and be able to use them in the Olympics. 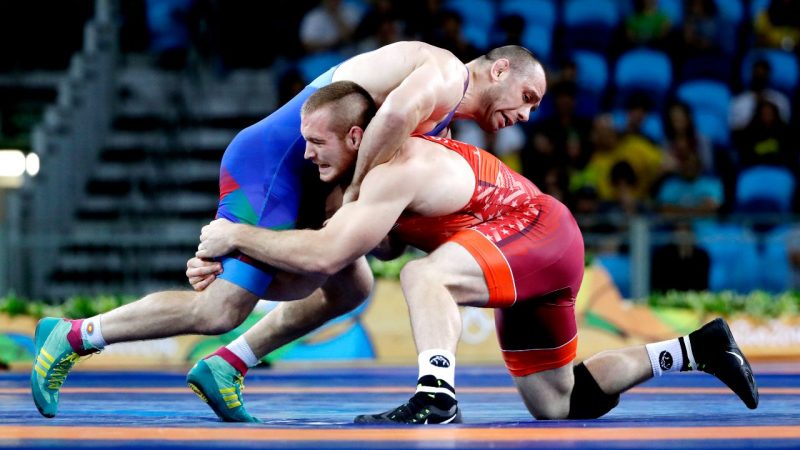 How we ended up at Penn State was pretty cool. My wife was applying to medical school all over the country and I was going to go train wherever she got into school. She then made the decision that she wanted me to go to whatever school would be best for my training. Penn State was the best place. So my wife removed all of her applications except for the one to Penn State, and she was accepted, so I started training. We decided to trust God with it.

And now I’m looking forward to Tokyo. It’s definitely a pretty awesome experience to be able to go to the Olympics and represent America. The most fun part is just being with the team — the five other guys I’m with, training with them, hanging out with them and the coaches. We don’t spend too much time in the Olympic Village. After a few days there, we go to a private compound to train, and that’s where we are for the majority of the time since wrestling is usually one of the last sports to compete.

I try to live in the present and faith helps me do that. I think of all the ways God has benefited my life and I’m able to enjoy the moment, like when we’re at the Olympics, but I’m also able to stay focused and train the way He wants me to.

That’s important because one of the biggest problems with sports in general is being overtrained. When you are overtraining, you are less motivated and less zoned in. This causes problems with technique, injury and motivation. Lately I’ve been working on eliminating anything that’s not necessary. I want to get my training down to exactly what I need to do — nothing more, nothing less.

As big as the sport is in my life, wrestling doesn’t define me. God alone defines me. I’m always consistent with my Scripture study and prayer, and during the pandemic I was able to continue to grow and focus on God and hear what He wanted to teach me.

Like I said earlier, I spend time visualizing the competition arena and the way I will feel and handle different emotions during those moments, so that when I get there I have a plan. And whenever I do all of that, I’m asking God, “What do You want me to think? How do You want me to warm up and compete?” The down time gave me more time to think about such things and prepare for what’s to come.

“As big as the sport is in my life, wrestling doesn’t define me. God alone defines me.” — Kyle Snyder

God is my No. 1 priority. Some days are busier than others, but I still stay focused on Him throughout the day with whatever I’m doing. I don’t take on very many interviews or media engagements because I just want to compete the way God wants me to and focus on that. I’m not focused on building myself or a brand up; I want to go in and dominate.

Sometimes there might be a faith-focused guy who will come down and lead Bible studies with the team, and other times we will just do a study as a team ourselves, because a lot of the guys are Christians. My coaches and I are also very close. I talk to my coaches a lot and they help me a lot, both in my sport and faith. My strength coach is a very strong Christian and he’s helped me; the example he’s set for me is amazing. There are many other people who have been very influential in my life and faith. It’s important to be able to talk to others about your faith and what you are learning.

I just finished reading Revelation. One of the things that really stood out to me this time as I was reading it is that God has already told us the end of the story. There is the picture of all the Christians worshipping God in His presence and all I could think about was, “That’s me. I’m one of those people who will be there!” So what’s left for me to worry about except to trust in Him?

We are told in Matthew 6:33 to “seek first his kingdom and his righteousness, and all these things will be given to you as well.” We are called not to worry, and yet the trouble we have isn’t the stuff we face at work or in sports, but it’s in trusting God. I’ve been encouraged by the fact that everything’s already been done by Him, so I don’t have to worry about a thing.

One of my favorite verses says, “Whoever can be trusted with very little can also be trusted with much” (Luke 16:10). It’s the small things you do every day that allow you to be confident in the bigger decisions in life. If you consistently study God’s Word, spend time in prayer, listen to God and even think about God — making the effort to have a Godly perspective in everything you do — then you begin to experience His hand in things and experience change in your own life. You overcome things that may have been working against you, and that’s when you can then be more confident.