Featured: Taking One for the Team

By Sports Spectrum Dec 7, 2016
KANSAS CITY, KS - MAY 29: Ryan Hollingshead #12 of FC Dallas takes a free kick header and redirects it away from the Sporting KC defense in the second half on May 29, 2015 at Sporting Park in Kansas City, Kansas. (Photo by Kyle Rivas/Getty Images)

Take one for the team” is a cliché not heard as much these days, but in the past it was in more regular rotation. In baseball, it could mean a batter letting a pitcher hit him to force in a run or taking a walk to load the bases so a teammate could then drive in the winning run.

For FC Dallas defender/midfielder Ryan Hollingshead, that phrase has a different meaning. However, it’s no less meaningful for the California native.

In 2013, Hollingshead, who starred collegiately at UCLA, was drafted in the second round of the MLS SuperDraft, but with a catch.

When Dallas, then led by now-former head coach Schellas Hyndman, drafted Hollingshead, the club knew he would take a year off from soccer to literally serve a higher purpose. It was a scenario Hyndman, who led FCD to MLS Cup in 2010, the franchise’s only appearance in the league final thus far, was fine with because he felt Hollingshead’s immense upside outweighed any risks.

Hollingshead didn’t play for FCD in 2013 because he was helping his brother, Scott, start a church, Harvest Bible Chapel, in their hometown of Sacramento. Ryan knew he was risking his soccer future by taking a year off, but he couldn’t turn away from knowing that helping his brother was what he was first supposed to do, which is exactly what he did.

“Yeah, I think I say that lightly, that it wasn’t a hard decision, because in the end the decision that I made was clear and I didn’t really have regrets about it, but it was months of talking it through,” Hollingshead recalls.

Not only did he pray often on his decision, but he also sought input from his family. Looking back, he knows he made the right call, especially when he sees his brother’s church and his own professional career simultaneously thriving.

“We had pro/con sheets written out. I was calling family members, I was bringing everybody into it trying to get more of an idea like hey, am I making the right decision here? In the end, I guess it wasn’t really easy, but I don’t regret it for a second,” Hollingshead said. “If it happened again, I’d make the same decision.”

Naturally, Hollingshead found himself missing soccer during his year away, but he also treasures that time spent with his brother, which made them closer, and also because of the bigger cause they were serving.

“In a symbolic way, you’re really in the trenches together, digging through really hard things, stuff that I don’t enjoy doing-knocking on peoples’ doors, introducing yourself to neighbors, getting the word out and getting people involved in the church,” Hollingshead said.

“Those things are not the most fun, [but there’s] a more deep joy behind doing them. Doing them with him side-by-side, every night we’d come back with the craziest stories about what happened that day, what God was doing. Those are things I’ll never forget and things that for sure brought us closer.”

When FCD missed the playoffs in 2013, Hyndman resigned as coach. So when Hollingshead reported for the start of preseason practice in January 2014, he saw a different coach, current Dallas boss Oscar Pareja, than the one who drafted him. 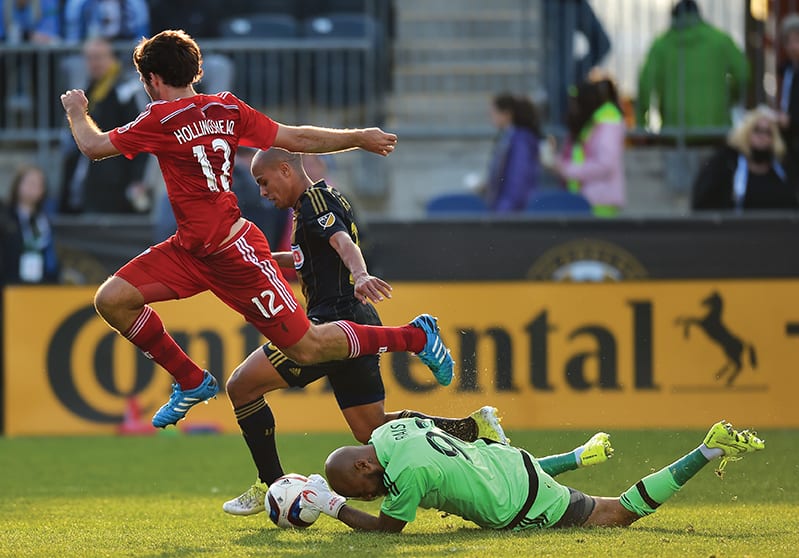 CHESTER, PA – MARCH 21: Ryan Hollingshead #12 of FC Dallas jumps over Rais Mbolhi #92 of Philadelphia Union as he makes a save and teammate Fabinho #33 tries to defend at PPL Park on March 21, 2015 in Chester, Pennsylvania. Dallas won 2-0. (Photo by Drew Hallowell/Getty Images)

Upon arriving in Frisco that January to start his first preseason as a professional, Hollingshead figured he’d only need a month or two tops to regain the high level of fitness he had as a senior at UCLA.

But he quickly realized his timetable was more than a bit off.

In fact, about four months into his first professional season, he wondered if he had what it took to play the game he loves for a living.

However, through his strong faith and the continued positive influence of family and friends, he persevered through his struggles and came out a better player and stronger person.

“My brother and my wife and a lot of people around me were like keep going, man. It’s going to come, it’s going to come,” Hollingshead said. “So I was putting in just a ton of work, working on every aspect of my game, and it clicked.”

FCD team chaplain Cliff Shaw is a mentor to Hollingshead as well as the two other devout Christians, defenders Zach Loyd and Walker Zimmerman, currently on the roster.

And seeing how far Hollingshead has come on and off the field since he first arrived in Frisco definitely brings a smile to Shaw’s face.

“I look at him now and see how far he’s come and I can only attribute that to his faith,” Shaw said. “Taking a year off like that sometimes costs you a career, but he knew what he needed to do and he did it. Now he’s in God’s blessing for doing that and has allowed him to play as well as he’s playing.”

Before playing for Pareja, Hollingshead had been primarily an attacking player. However, after Ryan acclimated to the rigors of the pro game, his new coach had a grander vision—moving Hollingshead to defense in 2015.

Playing in the back was a foreign concept for the affable California native, but figuring Pareja would only do what was best for him and ultimately for the team, it was a paradigm shift he openly embraced.

Of course, there were plenty of growing pains in his new role, but again, Hollingshead’s faith helped him stay the course during his transition.

“A word the Bible uses often is steadfastness, which is holding on for dear life for a long period of time,” Hollingshead said. “That was what I was really trying to rely on, is let’s just persevere through this and let’s be steadfast in working at the little things, trusting that it’s going to happen.”

And one of his closest friends on the team feels that transition went easier for Ryan than it does for most for one basic reason.

“Yeah, it was kind of an easy transition for him because he’s a smart player,” Loyd said. “Positioning’s the biggest thing that we talk about quite a bit and he’s not scared to ask a question, which is a good thing. Ryan continues to grow. This is only his second season back there and he continues to get better. He’s going to continue to grow and hopefully become one of the best outside backs in the league.”

Over the past year-plus, his comfort level, both at right and left fullback, has risen considerably and Pareja has no qualms about playing him in either spot. But while Ryan takes pride in how far he’s come since moving to defense, he also knows that the best is yet to come, for him and his team.

“I don’t feel like I’ve tapped out my potential yet,” Hollingshead said. “That’s an exciting place to be too.”

But not only is Ryan pleased with how far his game has come in his nearly two seasons as a pro, but when he travels back home with his wife on a rare off weekend during the season or in the offseason, he loves seeing how much his brother’s congregation continues to grow.

And he knows that had he not taken that year off from soccer that none of this-Harvest Bible Chapel thriving and his successful transition from midfielder to defender, would have been possible.

“Yeah, there’s such a joy going back there,” Hollingshead said. “The best part is seeing those 50 people, those core members that were there from the very start. Those are the people that when we had our first official service, those people were there. It [the church] has gone from about 150 to over 500 people there on a weekend. It is a blast [to go back]. If the service starts at nine and isn’t done until 11, I’m there until 1:30 just chatting with everybody. It’s a blast, there’s such a good family feel there.”