September 25, 2016 was a dark day for the Miami Marlins and all of Major League Baseball. José Fernández, the All-Star. The ace of the team. One of baseball’s top starting pitchers in the midst of his greatest season as a pro, was tragically killed in a boating accident. He was just 24 years old.

José, like most players, came up through the minor leagues. He was the 14th overall selection in the 2011 MLB Draft by the Marlins at just 18 years old. Miami followed their first pick of Fernandez by selecting Adam Conley, a left-handed pitcher out of Washington State. He and Jose immediately became friends and roommates on the road as they began their professional career with the Single-A affiliate of the Marlins, the Jupiter Hammerheads. “I got to know him and his family very well,” Adam said. “I saw a kid who was so talented. He constantly had a smile on his face. Even in the minors, he was one of the most talented players I’d ever seen in my life.”

Adam and Jose could not have been more different, but their love for baseball and the team brought together a unique friendship. One that continued into the big leagues in Miami. As their relationship developed, Adam and Jose grew close enough that they were able to have meaningful conversations on life, faith, and God’s word.

In 2013, 21-year-old José Fernández was named NL Rookie of the Year after having a stellar first season with the Marlins. Two years later, Conley joined Fernández in the show, starting 11 games and solidifying himself as a big league pitcher. In 2016, both Conley and Fernández once again were in the starting rotation and performing well. It was everything the two friends could ask for as teammates, as roommates, and as friends.

Adam Conley was returning from injury and was supposed to pitch Sunday the 25th, against the Atlanta Braves. He woke up to the news that his friend was dead. Once the game was postponed by Major League Baseball, Adam knew he had to go to the ballpark and face his teammates. “It was just a blur,” said Conley. “ I don’t know how to put it into words how I was feeling. This is a room full of men who are feeling a way that they’ve never felt in their life.”

Adam arrived at the ballpark that morning and walked into a somber clubhouse full of men weeping, crying, emotional; it seemed that no one knew what to say or how to react. “I couldn’t imagine what they were thinking and I was struggling to find clear thoughts,” said Conley. “I had to slow myself down and think through and ask the Lord what His will was here. What did I need to do in this moment?”

Chris Lane, the Marlins’ team chaplain, knew that that room was looking to him to be the spiritual leader and to talk about how they were to get through the loss of their friend and teammate. But deep down, Chris was hoping one of the guys would stand up and share.

Adam Conley was that guy.

“This room is intimidating,” said Lane. “It’s not an easy situation, but Adam walked in and was obedient to the Holy Spirit.”

Conley experienced one of the most powerful moments of his life. Inside that clubhouse, he stood up and shared the Gospel of Jesus Christ with his teammates. “I looked those guys right in the face and I said Jesus is the only way to Heaven,” said Conley. “It’s the most loving thing I could have ever told them. I think it was the Spirit of God.” 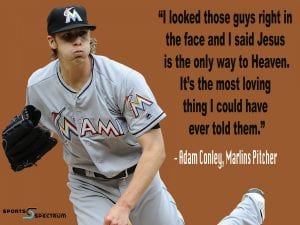 Lane watched as Conley shared about Jesus to his teammates. As a team chaplain and spiritual leader, he knew it was a moment he would remember forever. “Many people were thankful and grateful and appreciative after and talked about Adam standing up and sharing. We had a couple players pray to receive Christ in their life.”

After a day of grieving, the Marlins had to turn around and play the New York Mets the next day in Miami. José Fernández was originally supposed to pitch the game. Instead, it was Conley who took the ball and faced the playoff-bound Mets. Conley had a terrific outing in his first stint back from injury. His first 11 pitches were strikes. He was supposed to pitch just one inning and ended up throwing three scoreless innings. “I’ve never gotten on the mound to pitch a baseball game and had less feeling about what my body was doing, where the ball was going to go, how hard I was going to throw it,” said Conley. “I hadn’t slept or eaten in 2 days. I ended up throwing 45 pitches on national TV and it was the most tired I’ve ever been in my life.”

The Marlins would go on to play inspired baseball that evening. Each Miami player wore number 16 to honor their late teammate. Second baseman Dee Gordon, who had yet to hit a home run the entire season, led off the game with an upper-deck solo shot. After he crossed home plate, he pounded his chest twice, pointed to the sky, and then broke down in tears. Emotions never waned but Miami was able to harness them, jumping out to a 7-run lead that saluted the life of their teammate José Fernández; they beat the Mets 7-3.

Following the cathartic victory, Conley and his teammates returned to mourning and processing the loss of their friend and teammate. An hour after the game, with the ballpark empty, Marlins players gathered at the mound for several minutes, laughing, crying, and remembering José Fernández.

Adam Conley’s walk with Christ has grown in a way that he never expected. “When the Spirit of God comes into a place, like that clubhouse during the game, when His Spirit comes and very clearly does a great work on this earth, it looks far different and far more radical than the types of work you see your peers and yourself produce.”

Chris Lane believes Adam’s message to his Marlins teammates will stay with them forever. “Every night you put your head on the pillow and you go, Is this all there is?” said Lane. “But they know there’s more because they’ve heard the Gospel. They’ve heard there is more. And that ‘more’ is Jesus. And He loves you. And there’s tragedy, but there’s hope, and that hope comes in Christ.”

The death of José Fernández shocked everyone in the sports world. But an amazing thing happened over the next few days. In the midst of the pain, purpose was found. Adam Conley and Chris Lane provided hope through their witness as followers of Jesus. They showed their teammates that even during the worst tragedies you can imagine, Christ can still be exalted.

(This article is featured in the April, 2017 edition of Sports Spectrum Magazine. Subscribe and get your copy here.)

(Adam and Chris were also featured as part of Sports Spectrum’s debut podcast episode which you can listen to below.)