Billy Graham, widely regarded as the most important and well-known Christian evangelist of the 20th century, died at his home in North Carolina on Wednesday at age 99. An immediate outpouring of remembrance and appreciation followed on social media, as the millions moved by Graham’s messages expressed their respect for the man who packed stadiums and utilized media on a global scale to make the Gospel known. 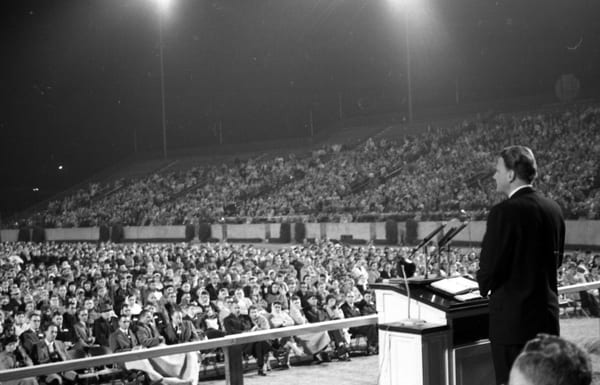 Among the mourners are current and past presidents, whom Graham prayed for and counseled, celebrities, and multiple professional athletes and coaches.

“(When I’m gone) I want to hear 1 person say something nice about me…& that’s the Lord—‘Well done, good & faithful servant!’”
-Billy Graham
Billy heard those words this morning & so will 3 million others b/c of his life

God proved His love on the Cross. When Christ hung, and bled, and died, it was God saying to the world, ’I love you.’ – Billy Graham #welldonegoodandfaithfulservant pic.twitter.com/oXu57xPGoV

If for only a moment our eyes could see the glory #BillyGraham is now beholding we would undoubtedly impact the world with the unwavering faithfulness and fervor that he did. I am so thankful for the life and legacy of this great man. Well done good and faithful servant.

I remember that moment like it was yesterday. What a blessing to be on that stage and see Dr Graham communicate the gospel!

I just found out about the passing of Billy Graham! I have many fond memories of him. RIP Billy Graham. Our prayers are with @AGLotz and rest of the family! pic.twitter.com/9Dm3Sbsb1B

What a remarkable life by the great Rev. @BillyGraham! Matthew 25:23 is so appropriate, “Well done , good and faithful servant!”