When life’s trials come our way, keeping the situation private and within the family is how many of us cope.

For Paige Eakright and her family, that was their plan as well.

However, when we make a courageous choice to open up and tell our stories of struggle, that’s when the biggest impact can be made.

On Aug. 26, 2016, her first day of college at Huntington University in Indiana, Paige Eakright was diagnosed with an extremely rare form of cancer which usually affects children during their first five years.

At a time when a young lady is supposed to be preparing for classes, new friendships and playing college volleyball, Eakright was preparing for a battle.

After undergoing a couple surgeries to remove the cancer, Eakright was back with the team and, amazingly, played through the entire 2016 volleyball season with Huntington. She earned freshman all-league honors and was a key contributor to the team.

Following the 2016 season, Eakright began a rigorous 38-week treatment of chemotherapy that was completed in November 2017. As people began to wish her well and inquire about her recovery, her original thought was to try and keep it private because she didn’t want to make people sad and let others down. But soon, she realized that sharing her story could provide inspiration and help others.

“I’m definitely one of those people who hate when people are upset, and I didn’t want them to be sad for me,” Eakright said to the Ft. Wayne News Sentinel in December 2017. “I wanted to make friends at school because I’m normal, not because I’m abnormal. They reacted just the way I wanted them to. I asked all my best friends to treat me the same, and they treated me like I was a normal person, but they comforted me when I needed comforting. The way everyone reacted was exactly what I needed.”

One of the things that kept Paige and the rest of her family going was their very strong faith in Jesus Christ. Led by her father Craig, a pastor at Grace Gathering Church in Ft. Wayne, Ind., the Eakright family turned to prayer and Scripture to help them work through this trial. One of the key verses they leaned on during Paige’s treatments was Romans 8:28:

“And we know that in all things God works for the good of those who love Him, who have been called according to His purpose.” — Romans 8:28

“From the very beginning, we knew this doesn’t feel like it, but it’s for our good and for His glory,” Craig told the Sentinel. “Those are the two things we held onto even during the painful part of it. It had to be something big He has plans for.”

Huntington volleyball coach Kyle Shondell told Sports Spectrum that watching Paige go through this cancer battle has inspired him both as a coach and a man of faith.

“She’s kept me unbelievably honest, both as a believer and as a coach,” Shondell said. “If there’s a day that I’m not feeling up to it — and I know our players have vocalized this — if there’s a day they’re not up to it, when she walks into the gym, with the motivation she has, it’s hard to think anything less than ‘I’ve got to go and I’ve got to give everything I have to my teammates.’ In my case when she walks into the gym, knowing what she’s been through, I’ve got no excuse to give everything I got.”

Shondell says he attends the same church as the Eakright family and through a ton of prayer, tears shed and believing God for healing, he saw the Lord in action.

“When we saw what Paige went through and [how] she came out the other end of this, we were watching God work,” Shondell said. ” That’s an unbelievable thing to watch happen. Going through this emotional roller coaster with her and to find out she beat cancer, and she’s cancer-free, and then now watching her on the court and be as motivating and as determined as she is, as a Christian and a believer, it’s an unbelievable force and an awesome motivator to wake up every day, be thankful for what you have and know how great our God is.” 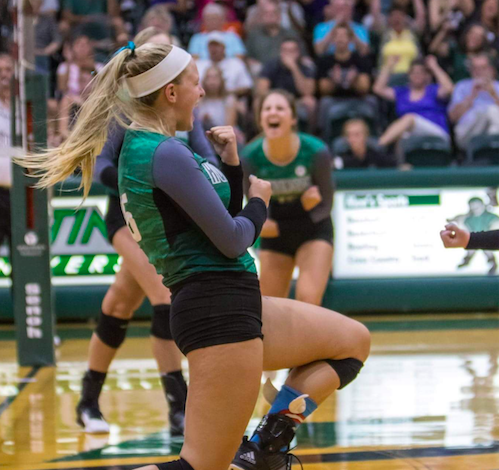 After missing the entire 2017 season, Coach Shondell said Paige has recently returned to the team and is participating in spring practices. He said she is still not back to her form prior to the chemo, but says she’s working hard and just her presence around the rest of the team has been inspiring.

“We started spring practice the first week of February and she’s been going with that full throttle,” Shondell said. “We have spring competition and we will compete three times this month in a couple of tournaments and scrimmages and we expect Paige to be a part of it. She belongs in our gym as the player she is now. You can’t really tell that she’s been through things unless you know.”

According to the News-Sentinel, Eakright is studying to be a teacher and has been pondering how she will be using this trial to impact others in the future

“When I spoke at the school, the pastor asked me what I wanted to take away from all this,” she said. “The only thing I had was just for college students not to take anything for granted because I definitely did before all this. Literally everything: eating, walking, sleeping, family — I took all of that for granted at least a little bit, and I don’t at all anymore. I can’t imagine not having any of those things.”

– What it takes to be a great volleyball player or coach?