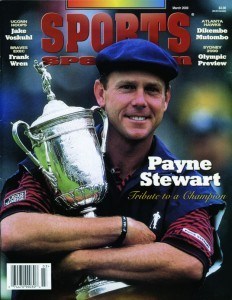 To understand golfer Payne Stewart—the most public of sports figures, who died the most public of deaths last October—you have to look deeper to see what changed him over the last 18 months of his life. And the best way to do that is through the eyes of his friends and colleagues.

“The one thing I think about Payne was that he was genuine,” says fellow PGA pro David Ogrin.

Ogrin knew Stewart from his college days when David played for Texas A&M and Payne starred for the Southern Methodist University Mustangs. He observed him closely for nearly 20 years and is perhaps one of the best qualified to comment on Stewart’s decade-long journey from highly successful yet highly dissatisfied pro golfer to a confident and peaceful belief in Jesus Christ in the last year and a half of his life.

But Ogrin, like Stewart’s many close friends, including golfer Paul Azinger, sports agent Robert Fraley, and baseball pitcher Orel Hershiser, came to see a genuine difference in the once egotistical and often sarcastic golfer.

“In the last couple of years, Payne became a genuine Christian. He had earned everything a man could earn on his own in the golf world and found that it wasn’t enough,” Ogrin adds. “To understand what finished out the man and the grasp that it held on him, you have to see what Jesus has to offer and the place He played in Payne’s life.”

The difference, according to PGA Tour chaplain Larry Moody, was that Stewart went from having a religion he could fall back on if needed, to a personal relationship with Jesus, which carried him through the highs and lows of his final months in this bunker we call “earth.”

Moody, who often leads the Wednesday night Tour Bible study, began making the rounds on the PGA Tour in 1981, Stewart’s rookie year. He too witnessed first-hand the changes in Stewart’s life.

“Although Paul was sure where he was going, Payne did not share the same confidence,” Moody adds.

All the while, Stewart’s agent Fraley and his wife Dixie, along with good friend Van Ardan, were continually talking to him about a relationship with Jesus and how the peace and joy of a personal Savior could overwhelm any golf trophy Stewart would ever win.

The most constant reminder of his need to change inside and out came from his two young children, Chelsea and Aaron. They began attending a Christian sports camp each summer in Missouri, Stewart’s home state, and they made sure of their eternal destiny during one of the camps.

“We always said they were raising Payne just like he was raising them,” Stewart’s longtime golf teacher Chuck Cook says. “They brought home the Christian life and the Christian values to him on a daily basis.”

When it came time for Tracey and Payne to select a school for the two kids, the Stewarts sought out one of the top Christian schools near their Orlando, Florida, home, the First Academy at the First Baptist Church of Orlando.

While the denominational label was ultimately unimportant, the teaching Payne received at the church proved to be one of the final mileposts of his spiritual journey.

Stewart began attending a men’s Bible study led by major league pitcher Hershiser, who also stressed the need for a personal relationship with God. Orel emphasized that being accepted by God is not based on good works but on faith in Jesus—the One who had paid the penalty for his sins and could make him righteous before a holy God.

“God used a little bit of everybody in Payne’s life,” says First Baptist associate pastor J.B. Collingsworth. “Larry Moody and Paul Azinger were factors, his kids brought it home to him daily, and he came to First Baptist Orlando, where he joined the men’s Bible study and learned many things here.”

Stewart also became good friends with golf legend Byron Nelson, one of golf’s greatest winners, who told Payne of his own need to have Jesus in his life to help, guide, and comfort him.

“Payne was as solid as they come,” Nelson says. “He loved Tracey and the kids, but he had a real love and peace in his life from Christ.”

Despite all the shared knowledge and friendly persuasion, Stewart had to settle his spiritual relationship alone, which he did—asking Christ into his life as his personal Savior and Lord privately in 1998.

Shortly after that, Payne’s son Aaron helped Dad let the world in on his changed life.

Early in the 1999 golf season, Aaron gave his dad his WWJD bracelet, which stands for “What Would Jesus Do?” The 10-year-old proved wise beyond his years when he challenged Dad to come out of the closet and let others know about his private commitment to Christ.

Moody was one of the first to hear from Payne about his bold commitment when he encountered him on the practice range at the Shell Houston Hope in April. Seeing Stewart wearing the bracelet, Moody asked for some background information and listened as Stewart told him that God had truly changed his mind, body, and spirit.

“In the last year, I knew Payne was committed to God, but in Houston was when I found he was unashamed publicly of his commitment,” Moody says.

The rest of the sports world caught on a few months later when Stewart conquered the demanding Pinehurst No. 2 layout to win his second US Open title, capping the victory with a bracelet-encircled fist thrust into the air on the 18th green.

That photo and Stewart’s spoken, public commitment were played around the world the following day as his path from carnal, clutter-filled darkness to peaceful life became clear.

Collingsworth, who became a friend of Stewart’s over the last 18 months, spoke with Stewart at a post-US Open party thrown last July by his wife to help map out his future path.

“He told me he wasn’t going to be a ‘Bible thumper;’ that wasn’t his style. But he wanted everybody to know it was Jesus, Jesus, Jesus who had done this great thing in his life, and that was all-important.”

Moody said that in the past Stewart would mock players who attended the weekly Bible study for being less than perfect and even quite human at times.

“I told him only sinners came to the Bible study, and if he wasn’t one then he shouldn’t show up because he would make the rest of us look bad,” Moody says, recalling his tongue-in-check response.

Eventually, of course, Stewart became aware that although he was less than perfect as a player or a person, he was forgiven by the One he had accepted into his life.

For Darin Hoff, who grew up with Stewart in Springfield, Missouri, and who knew Payne since age 15, the change began to come into focus when his buddy lost the US Open title to Lee Janzen in 1998.

“I saw he was truly gracious in defeat and really cheered Lee Janzen when he won. I knew that was not like the old Payne. His faith was so much more important to him than it ever had been before,” Hoff says.

Hoff was working as an assistant golf pro in South Bend, Indiana, when he received the stunning news of the death of Stewart, Fraley, Ardan, and the others. Payne’s old friend grabbed a flight to Orlando for the memorial service. He spent much of the trip thinking about his friend and the difference he had seen in his life over the last year.

“At the memorial service, I realized that I didn’t have what Payne did. It was like God was standing right there calling me to come to Him. My life was changed forever on that day, and I know I will never be the same.”

Collingsworth says that in the months since Stewart’s death, he has heard from people all over the country who have been affected by it and desire to follow the golfer’s spiritual path.

Moody, who has dealt with professional golfers for nearly two decades, can only shake his head in amazement at the pathway Stewart traveled in his professional, private, and spiritual life.

“What a tremendous legacy he has left us. How thrilled we are to know him and to know that his story is attracting so many others to what Payne has found.”

It was a winding pathway, but an eternally fulfilling one for the most public of golfers, who made the most public of life-changing commitments. And now all the world is find out about the transformation that made Payne Stewart’s life—and death—a tribute to His Savior.

This story was published in the March 2000 issue of Sports Spectrum.