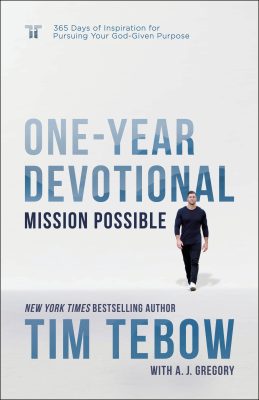 Now, in his first devotional, “Mission Possible One-Year Devotional: 365 Days of Inspiration for Pursuing Your God-Given Purpose,” the New York Times bestselling author shows readers that the secret to a truly meaningful life doesn’t involve more comfort and ease, but a clear focus on who God is and who He made them to be. Through 365 Bible-based readings, Tebow reveals how readers can find their mission in life and take steps to pursue it.

The following is an excerpt from “Mission Possible One-Year Devotional: 365 Days of Inspiration for Pursuing Your God-Given Purpose.”

A Crown That Lasts Forever by Tim Tebow

“Everyone who competes in the games exercises self-control in all things. So they do it to obtain a perishable wreath, but we an imperishable.” — 1 Corinthians 9:25 (NASB)

When the apostle Paul wrote his first letter to the Corinthians, he knew the Christians reading it would understand his athletic references. Located less than ten miles from Corinth was the city of Isthmia, known for hosting the Isthmian Games.

The Isthmian Games was a prominent ancient athletic event. Historical records tell us that it probably started in the sixth century BC and recurred every two years in the spring. Sporting events included running, boxing, wrestling, and chariot racing.

The Greek word translated “wreath” in the above verse is stephanos. It means “a crown of victory, royalty, or honor.” In the Isthmian Games, victors would have been awarded a stephanos — a crown made of withered pine or celery leaves. Paul described this type of crown as “perishable.” And he’s right: A crown of celery or pine leaves won’t last, just like modern medals, trophies, and other awards won’t last either.

Trophies and awards aren’t bad things, but they just can’t be our ultimate goal. Rather, as Christians, we should work hard, exercising discipline in all we do, so that our efforts affect eternity.

Do a little soul searching. What are you really chasing after? Will it eventually wither away, or will it last forever?

Excerpted from “Mission Possible One-Year Devotional” by Tim Tebow. Copyright © 2022 by Tim Tebow. All rights reserved. No part of this excerpt may be reproduced or reprinted without permission in writing from the publisher.

SS PODCAST: Vikings radio voice Paul Allen on being an ambassador for Christ in sports