The online video gaming community is one of the most rapidly growing movements all across the globe. It’s also ripe with toxic and demeaning behavior, Mark Stockhoff says.

Stockhoff is the founder of eConnXn, a non-profit focused on “loving the gamer,” and he’s working to bring elements of sportsmanship and kindness to the online gaming and streaming community with the hope of pointing people toward Jesus.

“If there’s sportsmanship and there’s love, there will be Jesus and people will find Jesus,” Stockhoff told Sports Spectrum. “So our goal is to create a foundation of sportsmanship through eConnXn, and the hope is that we will be able to get close with a few people and a few people will ask, ‘Why are you different?’ And it’s all because of Jesus.”

For some casual sports fans, the world of eSports and video gaming may seem abstract. But according to Newzoo, there are roughly 2.6 billion gamers in the world today compared to 1.81 billion in 2014. The study estimates that number will be higher than 2.7 billion by the end of 2021.

There’s big money in this space, too. The study estimates that those 2.6 billion gamers will earn the global games market an estimated $165 billion. Professional eSports are rapidly growing as well, both in popularity and value, and well-known sports owners like New England Patriots owner Robert Kraft and Tampa Bay Lightning owner Jeff Vinik also own professional eSports teams.

There’s even some momentum for eSports to eventually be an Olympic event. 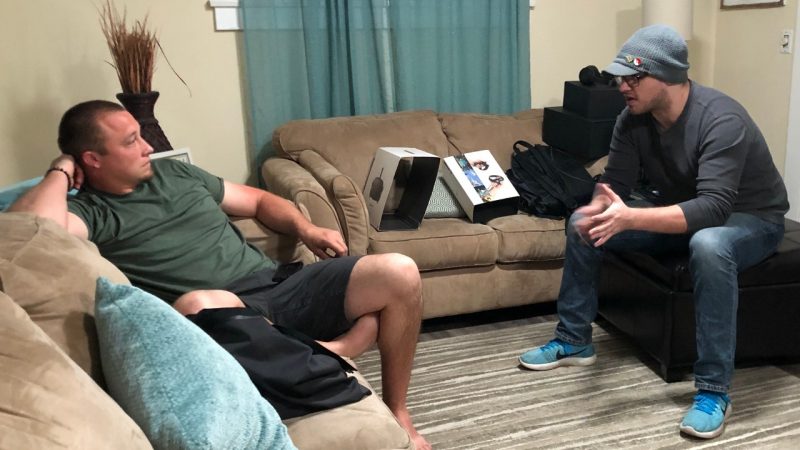 But the rise of gaming has also brought with it a rise in a culture that Stockhoff continuously refers to as “toxic” — full of rage, vulgarity, bullying and even threats of violence. Much in the same way that cyber bullying makes it easier for someone to tear someone down and not have to face them directly, the same happens too frequently in online video game streaming. Mix in an element of competitiveness and it’s not hard to see how this arena can be toxic.

An anti-bullying charity called Ditch The Label reported in 2017 that 57 percent of the people it surveyed experienced bullying while playing video games online. It was so bad that in 2018, StopBullying.gov put out a notice about cyberbullying in the online gaming space.

The anonymity of it all — people can use screen names and avatars and never reveal their true identity — makes it difficult for players to be held accountable and empowers them to feel like they can say whatever they want.

“People get extremely angry and there’s just no love, so I started just diving deep into this culture. What is going on with this culture?” Stockhoff asked, his voice raising with passion. “There’s no love.”

Stockhoff has always been an avid gamer. In his childhood he poured himself into “World of Warcraft” to escape the reality of living in what he described as a “broken home.” At one point while in college at Oregon State, he was gaming 17 hours a day and on the verge of flunking out.

“I had to pull out of the video game and start doing real life,” he said. “I started going to college, started doing my school work, but at the same time I was like, ‘What do I actually want to do for college?’”

He knew he wanted to do something with video games, but making a career out of that was still a little murky. Professional eSports at the start of the 2010s weren’t nearly as popular.

“I started understanding the culture and how toxic it is,” Stockhoff said.

A few years later, around the time he was 23, he came to know Christ and sold his company off. He started working for other companies doing film work.

Now, like he used games to escape his own harsh world, he hopes eConnXn can provide a similar reprieve for gamers.

The first version of eConnXn started in 2017, but it was sort of a test run just to gauge the culture of the gaming industry, he said. It was revamped in 2018 and he started streaming alone in May 2019. He spent about a year growing the community and just teaching people the principles of loving the gamer.

In January 2020, he opened it up as a full-fledged ministry network with streaming, podcasts and other content. They work closely with the Fellowship of Christian Athletes and have even had youth groups use some of their servers to game and hold youth group meetings.

Thank you @oceanhillschurch for another amazing gamer night! 7 consoles, 15 gamers, pizza, soda and great friends gaming together! Cant wait for the next one. @34north.oceanhills #santabarbara #gamers #comeon #lovethegamer

They had just 60 followers in January on Twitch, the foremost game-streaming service, and are now up to 120. Their community on Discord, a group messaging platform, has grown from 30 to 100.

As president of eConnXn, Peter Zinn is in charge of most of the content creation side of things and echoed a lot of what Stockhoff said, adding that the biggest thing that drew him to eConnXn was the community that he had trouble finding in other online gaming spaces.

“I’d say the biggest thing that can come from eConnXn is that sense of community and that sense of belonging and camaraderie when it’s so easy to go full 180 from there and have this animosity and toxicity that exists in the online space right now,” he said.

Stockhoff said while the growth has been great — and he has plans to add eSports teams under the eConnXn brand — the focus is the mission. He hasn’t really marketed as much as he has for other ventures because he said he only wants people to show up if they’re supposed to show up.

In other words, his goal is to remain faithful and let God do the rest. He just wants to be an example.

“We’re just doing it because we believe in the mission and we believe that the Lord has put this on my heart to do,” he said.