By Madison Thacker Oct 19, 2022
Dow Tippett and one of his students. (Photo courtesy of Dow Tippett)

The son of a pastor, Dow Tippett grew up in the church and at 8 years old dedicated his life to Jesus. He also made the decision to be baptized and publicly proclaim his faith.

“That threw things for a wrench,” Tippett told Sports Spectrum recently. “There’s a lot of guys out there who have that story, and it totally ruins their life in Christ, because of some of the choices that humans made.”

It would have been easy for Tippett to turn away from God in that time. Instead, he ran toward Him.

“I have the joy of being raised by Christ,” Tippett says. “God has been my Father most of my life, and instead of running from Christ, I ran to Him in the midst of that.”

In high school, Tippett felt called by God to go into ministry and for 25 years, he served as a pastor. Along the way he became interested in martial arts and started taking classes at his local YMCA in Wilmington, Ohio. Eventually, he became the instructor teaching martial arts at the YMCA, but shortly after taking over the program, the gym shut down. 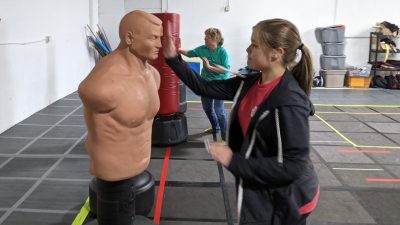 So Tippett, a Bible scholar above all else, decided to combine his love of Christ with his love of martial arts. He launched his own martial arts club, The Way Karate Club, in Wilmington.

His club teaches Biblical lessons through the lens of martial arts. Tippett and his fellow instructors at The Way came up with karate lessons to teach the characteristics of Christ to students, who range from age 4 to 65.

One of the lessons has been submission. Tippett has been teaching his students through karate that by submitting to an attacker and turning the other cheek, they can be put into a position of influence.

“When a threat comes at you, rather than standing face to face, you’ll yield to that. You’ll allow that threat to come to pass, and you’ll not take that on personally,” Tippett said. “You actually move into a position where you can influence somebody to change their desire to bring violence or attack. And then we move into Scripture. Jesus tells us to turn the other cheek, that if someone asked you to go a mile, you go two (Matthew 5:38-42). And then He follows that up with love your neighbor as yourself (Mark 12:30-31).”

Beyond the dojo, Tippett has written a devotional book called “Devotions From the Dojo,” and he’s putting together a website to offer membership plans for his martial arts lessons on Christ.

“We consistently tell [our students], ‘We’d rather teach you how to be a leader like Christ, but our goal is to teach you both,'” he says. “And so that’s what we do. We bring the two together. We have martial arts, and we have Christ and we’re constantly merging. Every class is designed to teach, through the martial arts lesson, some sort of Scriptural lesson, a character trait that Christ exhibits.”

In order to continue pouring into his students, Tippett is constantly working on getting closer to Jesus himself. He spends an hour every morning in the Word, growing in his own faith.

“When you’re teaching other people about Jesus, far too often what happens is you get caught teaching what you’ve already learned, and not growing in your own knowledge. Same thing happens in martial arts,” Tippett says. “We’re constantly growing our own martial arts in the same way that I’m constantly spending time with Christ. … That means I just spend more time with Jesus.”

In his life and in his karate club, Tippett continues to turn toward Christ.