By Scott Linebrink Jul 31, 2020
Scotty in action at age 13, biking 3,300 miles from California to South Carolina, in support of Water Mission. (Photo courtesy of Water Mission)

In the summer of 2017, then-13-year-old Scotty Parker biked more than 3,000 miles across the country to raise support for Water Mission and to advocate on behalf of the 2.2 billion people around the world lacking safe drinking water. Since then, I’ve continually been in awe of this visionary teenager, following not only his biking expedition from the Pacific to the Atlantic but his coming-of-age story.

While Scotty has grown up and his audience, advocacy efforts and vision have grown alongside him, he continues to embody humility and child-like faith. Here, from the perspective of one of Water Mission’s youngest ambassadors, we trace back Scotty’s safe-water mission that has increased in size and scope — but hasn’t meandered from his purpose of demonstrating and sharing God’s love.

Now 16 years old, Scotty shares his story of compassion and courage, recounting in his own words how a photograph he saw at age 7 led to an adolescent dedicated to championing the cause for clean, safe water. 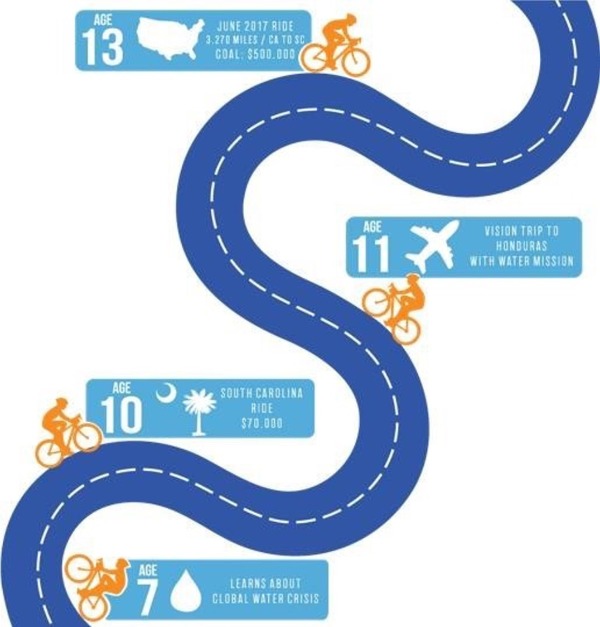 In Scotty Parker’s words: growing up and changing the world. (Image courtesy of Water Mission)

Age 7 | A photo of children collecting water from a muddy creek
My story with Water Mission started when I was 7 years old. My church had hosted Water Mission one Sunday. The ministry shared things about the global water crisis that I didn’t know about — that billions of people suffered from water scarcity and the lack of safe drinking water. That day, I saw a picture of kids in a creek that had more mud than water. The kids were filling up jugs with the water — and that really upset me, knowing there were kids my age that were dying because of something as simple as water. 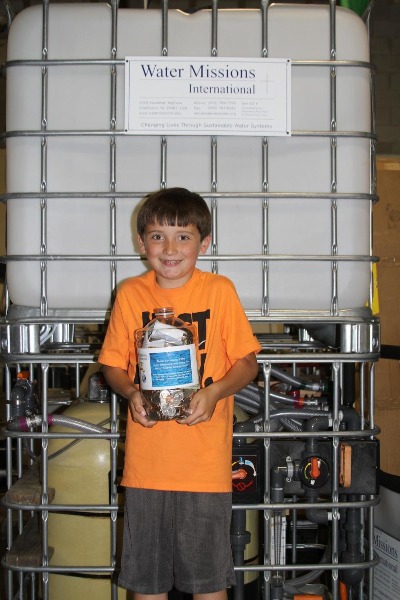 Scotty at age 8, holding a jar of coins and bills collected in lieu of gifts on his birthday. (Photo courtesy of Water Mission)

Age 8 | A birthday for a clean water cause
For my eighth birthday, instead of asking for presents, I asked my friends to bring money they would have spent on presents. We raised more than $600. At that age, I felt like it was a million bucks — and those gifts were going to change lives! That’s when I realized I had a voice. After my eighth birthday, I realized I was called to do even more.

Scotty at age 10, after completing Scotty’s Ride for Water across his home state of South Carolina. (Photo courtesy of Water Mission)

Age 10 | A bike ride across South Carolina
At nearly 10 years old, I realized kids around the world were still getting sick and dying from drinking contaminated water. That’s when I had this crazy idea that I’d ride my bike across the state of South Carolina. The first Scotty’s Ride for Water, one that took me across my home state, started on my 10th birthday. My goal was to raise awareness about water poverty and scarcity, and to raise $25,000. My family, friends, church and I raised more than $70,000 — enough to provide safe water for two communities in Honduras and a community in Africa. That’s when it dawned on me that Scotty’s Ride wasn’t about me at all. It was about the community that surrounded me and supported the idea of a ride for water. 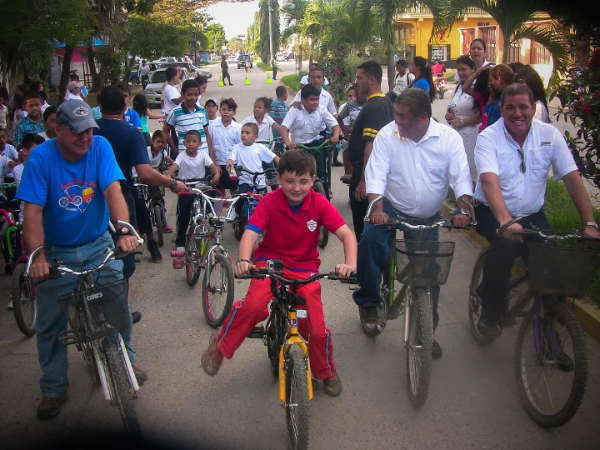 Scotty at age 11, biking in Tocoa, Honduras, joined by Water Mission country director Hector Chacon, and students and staff at a school now with access to safe water. (Photo courtesy of Water Mission)

Age 11 | Meeting children in Honduras in need of safe water
After my first Scotty’s Ride for Water, I had the opportunity to go to Honduras. I got to meet people who benefited from the clean, safe water. I had known about the global water crisis before that visit, but I never realized the true impact that safe water had on people’s lives.

On that trip, my family and I visited a school. As astounding as it might seem, the school of 750 students never had running water. What Scotty’s Ride provided was safe drinking water that was accessible to the classrooms. It also provided hygiene education training for students, which included instruction on how to wash their hands. My job that day was to go to every classroom in the school, take a sip of water taken from the Water Mission tap to show that it was safe for consumption, and then wash my hands with soap and water to demonstrate hygiene. I did this in about 16 classrooms. In each room, I was cheered, presented with various food items, and overwhelmed by the joy the students had because they now had water. That trip to Honduras set me on fire for my mission even more. 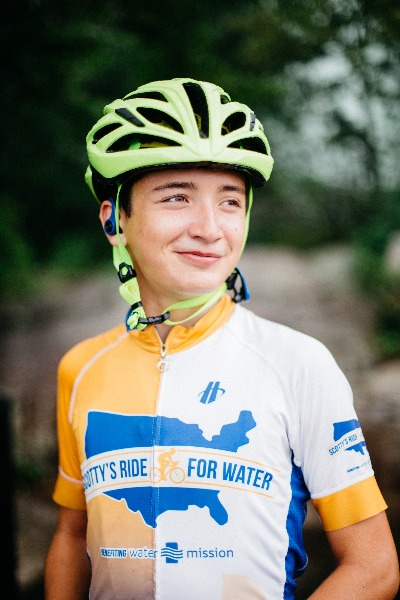 Age 13 | A cross-country bike ride that changed and saved lives
A couple of years after my trip to Honduras, I realized I wasn’t done with Scotty’s Ride; God still had more to do through me. That’s when I had the crazy idea to ride across the country at age 13. I committed to biking 3,300 miles from California to South Carolina. It was 3,300 miles of heat, rain, terrain and busted bike tires. Biking over mountains when the sun was beating down my back was hard, and it challenged me mentally. But in my mind, I kept going back to the fact that a third of the world didn’t have a choice — they only had unsafe water or no water at all. My momentary hardship was to help end their hardship. 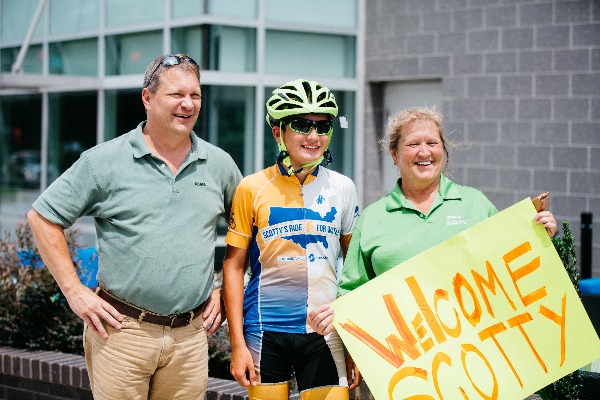 I was thankful that my parents, Water Mission staff and supporters, and a few friends joined me in the expedition. There were tears and smiles and lots of cheers from the side of the road. That’s what Scotty’s Ride was and continues to be about: It’s a movement. Thousands of people across the United States gave their time, talent, treasure and influence to make it all happen — and to ultimately provide safe water for thousands of people elsewhere. We had the goal of raising $500,000, which I thought was insane. Even though I had faith that we would reach the goal, I never thought we would surpass it and receive more than $630,000 in gifts for safe water. Traveling more than 3,000 miles, we met a ton of people full of love and joy. There are great people out there. Scotty’s Ride is about communities here making an impact on communities around the world. 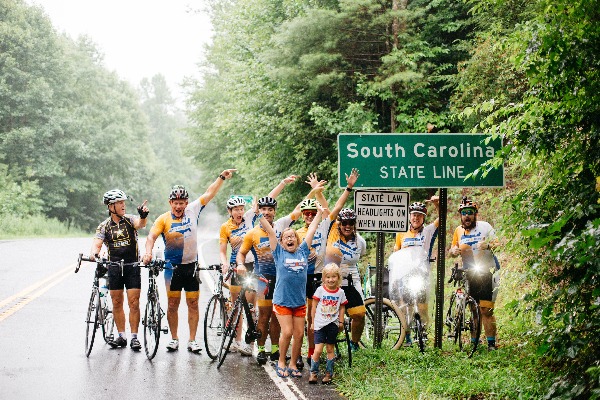 Age 16 | A mission and a movement to end the water crisis
Throughout the eight-week ride, we stopped so I could speak at churches or to do an interview with news crews. I would take off my helmet and put my hat on to cover my “helmet hair.” At one park, there were more than 50 people waiting for us and wanting to hear from us. I spoke to them about why I was biking for water and they spoke to me so many words of encouragement.

Today, three years since the cross-country tour, I still speak at youth groups, churches and schools. Sharing my story is not about this crazy kid who changed the world. It’s a story about being ready and allowing God to take whatever I have and don’t have.

While younger generations are often frowned upon, I feel like young people are at a perfect spot to change the world. In the Bible, Jesus talks about child-like faith. There’s a reason for that. When you’re a kid, you don’t see all the worldly issues. You just see what needs to happen and a way to do that, and your mind is not clouded by the world. You just see what God can do.

When I was on the road on Scotty’s Ride across the state, I had child-like faith. I didn’t see the logistical issues that came along with it. Riding across the country at 13, when I had learned more about the world, I realized that God doesn’t change. Our view of God changes because the world may change as we get older. But if we can get back to that child-like faith, the possibilities are limitless because God has the power to move in every way possible. You’ve just got to let Him out of the box you put Him in. Let God move and have faith that He can. And He can, trust me. 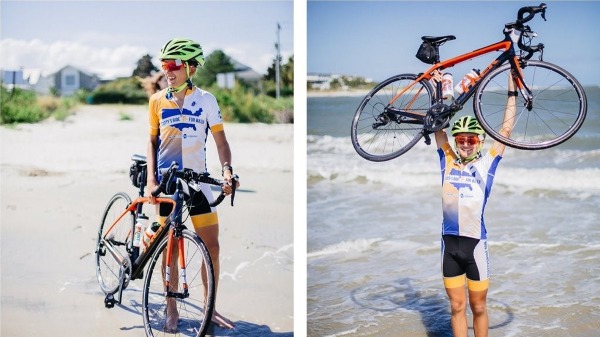 Scotty ending his cross-country ride with his feet in the Atlantic and his bike victoriously held above his head. He said, “It was a feeling of accomplishment and overwhelming joy, and a feeling of knowing that lives were going to change. It was a feeling of hope.” (Photo courtesy of Water Mission)

Soon after Scotty completed the ride in 2017, his mom jokingly said to us at Water Mission, “Scotty started biking across the state, then he biked across the country. We’re anxious to know what he’ll do next! Who knows?”

So, what is next for Scotty Parker?

When I asked, he said, “Sharing my story. Now, when I share my story to 10 people, they share it with 10 more people. And those people encourage 10 more. That’s hundreds of people who can now change the world — that’s more than one kid. It’s a movement, trying to change the world through safe water.”

Join Scotty in the mission of sharing safe water and God’s love with all.  >> Join the team <<