For Adam, baseball is much more than a career full of accolades that includes two world championships and three All-Star selections. His desire is to use his platform to share and be part of God’s work in the world.

He’s done this in a variety of ways. On the field, Adam serves as a leader to young players, and unashamedly shares his faith. He also meets people’s needs in his community and globally through his and his wife Jenny’s personal generosity, and their foundation — Big League Impact.

This praise would surely make him uncomfortable, unless glory was given to the One he serves — Jesus Christ. When asked about the legacy he hopes to leave in the game, his thoughts turn to inspiring players across the league to give back. That’s the heart of Big League Impact, and Adam is very excited about the network of players that have engaged in the mission and what they’ve accomplished so far.

“I tell young players all the time, whatever you do is setting an example for others,” Adam said. “You have the choice to either set a good or a bad example.”

Rangers pitcher Kyle Gibson told me, “Adam and Jenny have been huge role models for my wife, Elizabeth, and I when it comes to our life of giving back. They took the time to help us find our passion and ways to manage time with family and charity work.” 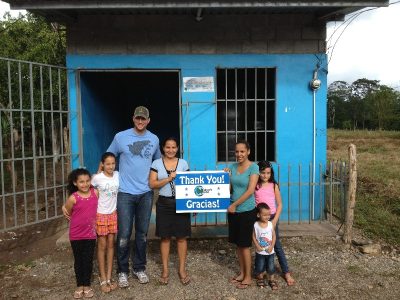 Since 2013, the generosity of Adam and Jenny has touched hundreds of thousands of lives by giving the gift of clean, safe water. The couple has personally resourced Water Mission projects across four countries in Africa. Water Mission is also a major funding initiative for their foundation. Through this partnership, Big League Impact has fully funded water and sanitation projects in seven communities across Honduras and Haiti. Because of these direct efforts, 20,000 people now have access to safe water in that region. As a result, these communities can experience increased opportunity and education, improved health, and hope for everyone living there.

Through Big League Impact, Adam was also introduced to another organization working in Haiti — Ferrier Village, a community program in eastern Haiti. As his conversation with them progressed, it became obvious that one barrier to working in Ferrier Village was lack of access to safe water. Already a partner with Water Mission, Adam reached out for help.

Pastor Jean Alix, director of Ferrier Village, gave thanks for the work recently completed, saying, “Water Mission has completed the solar power system [the main power supply for the water pump] and it is working very well. We appreciate the work and the partnership. They have done an excellent job!”

Partnerships make Water Mission’s work possible. As partners in mission, Adam and Jenny continue to go above and beyond, proving their dedication to use their platform to connect organizations and make a tangible difference in people’s lives around the world.

“As a baseball player, I’ve been given a lot,” Adam said. “I look around the world and I know there are people that need help — things they need to survive. That is what we like to cater to in our charity work.”

I really can’t communicate the impact that the Wainwrights have made for so many. I tell them “thank you,” but that never seems like quite enough. For Adam, though, I know it is. He said, “We don’t need to receive anything. We just need you [Water Mission] to keep blessing others and doing great work.”

Now that he’s received the Roberto Clemente Award, I asked Adam if he feels like he still has a legacy to leave. He said, “That work never stops.”

The relentless drive to serve others is part of the Wainwright family’s DNA. Their story will further the legacy of the Roberto Clemente Award, I’m sure. But it won’t end there. It will continue to play out in the lives of the people around the world who now have hope, and for others who have been inspired by Adam and Jenny to be part of something bigger than themselves.

Scott Linebrink was an MLB pitcher for 12 years, and now works as a Water Mission stewardship advisor.