Longtime St. Louis Cardinals pitcher Adam Wainwright has been a follower of Christ for nearly two decades. He grew up going to church and attending Vacation Bible School, as his mom did all she could to put him in the right situations to learn about God. But it was in 2002 at a Christian conference in Dallas when he truly committed his life to the Lord.

He’s been an outspoken believer ever since, continually seeking to learn and grow in his relationship with Christ. But he feels 2020 may have been the most important year in his journey.

About five years ago, his financial advisor, Don Christensen, who also serves as a spiritual mentor, visited Wainwright’s home in Georgia. They often would rise early to go golfing, but no matter how early a tee time was, Christensen would arise even earlier so he could read the Bible.

“He’s already got the notebook open, he’s already got notes written down, and he’s been in His Word,” Wainwright recently told Sports Spectrum. “And every time, before I leave the house, I’m like, ‘He’s already beat me. He’s like five strokes ahead of me right now.'”

Joking aside, Wainwright quietly admired a guy who put that much faith in the Lord and was intentional about making time for God. Eventually, Wainwright asked Christensen about this same notebook he saw him with every year.

So Christensen explained the Bible engagement plan he had developed on his own and followed for more than 20 years. The plan takes him through the entire Bible in a year, and each day includes passages from the Old Testament, New Testament, and one from either the Psalms or Proverbs. It’s organized in chronological order, making the Bible read like a story. Each day also includes a notes section for questions or observations about that day’s reading, as well as a prayer section to detail what’s on the reader’s heart.

When Christensen presented the plan to Wainwright, the pitcher already thought he read the Bible often. But in his first year of doing Christensen’s Bible engagement plan, he estimates he got only 30-40 percent of the way through.

“When I actually took notes, it gave me tangible evidence that I wasn’t reading as much as I thought I was,” Wainwright said.

He finished about 50 percent the next year, then around 60-70 percent his third year. Two years ago, as Wainwright completed nearly 90 percent of the plan, he also led some Cardinals teammates and a small group of men in his hometown through the journal. That’s when he began to discover the impact this journal was having. 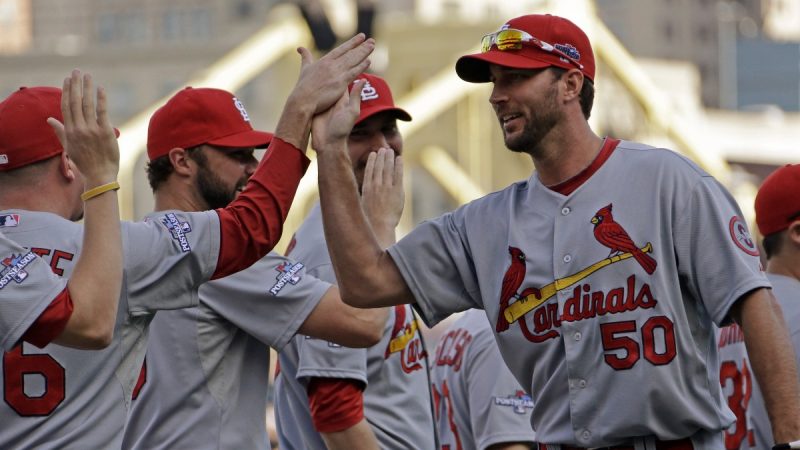 “I’m getting this feedback from guys saying, ‘This is really helping me. This is powerful stuff, man. I’m in my Bible more than I’ve ever been, so thanks. This is really helping me grow my faith,'” Wainwright said. “And I started getting this little tug. Every day it was like, ‘Adam, you’re supposed to do this on a bigger level.’ That’s what I really felt like I was hearing, and I kept arguing with this little voice in my head. I’m like, ‘Nah, nah. I’m not doing this on a bigger level. I don’t even know what that means.'”

But the voice was unavoidable.

“Finally, I went to our pastor at our home here in Georgia, and I said, ‘Hey, Pastor Dave, I feel like I’m supposed to lead this program. I don’t know if this is God telling me this, but I feel like it’s the Holy Spirit leading me to do this reading engagement program with the church congregation. What do you think?’ And he goes, ‘Well gosh, Adam. I think we would have some people who would be interested in doing that. Let us help you set it up.'”

So they worked on a format and set up an email account through Mailchimp. Then Pastor Dave announced the plan to the church, and said Wainwright had ordered 200 journals for those who want to take part. After the first service, there were maybe only 10 left.

“I ordered 200 journals thinking 50 people would show up, but I just didn’t want to be short,” Wainwright said.

Then he took a look at the email group. More than 3,000 people had already signed up. And then that voice reminded Wainwright about social media.

“So as I’m doing all this, I [nervously think], ‘Ahh, I got this big platform. That’s fine, it’s my church congregation, it’s in the local area, that’s great. But I got this big platform on Twitter, there’s a couple hundred thousand people on this thing, I feel like I’m supposed to do it on there too. What am I doing?’ So I offered it on Twitter too, and right now we have 22,000 people signed up for [the emails],” Wainwright said.

He set up a separate Twitter account specifically for this journey, calling it Walking With Waino, which currently has more than 16,000 followers. And for all of 2020, all these thousands of people have studied the Bible with a major league pitcher — a guy who now frets over putting apostrophes in the right place and quoting Scripture correctly. And he relies on his wife, Jenny, for inspiration when he gets writer’s block.

But the accountability that comes with knowing thousands of people are relying on his message every morning has been “one of the most powerful things of my entire life, honestly,” he says.

Wainwright and those walking with him are nearly through the year. But they’re not the only ones who have worked through this Bible Engagement Journal, as hundreds of other pro athletes have studied the same plan. Hundreds more will do so in 2021, and it’s now available to the public. You can get a copy of the journal at TheIncrease.com/Bible.