FROM THE ARCHIVES: Stephen Curry - The Year That Changed Him

This story appears in the October 2012 issue of Sports Spectrum Magazine.
Support our ministry and subscribe here. 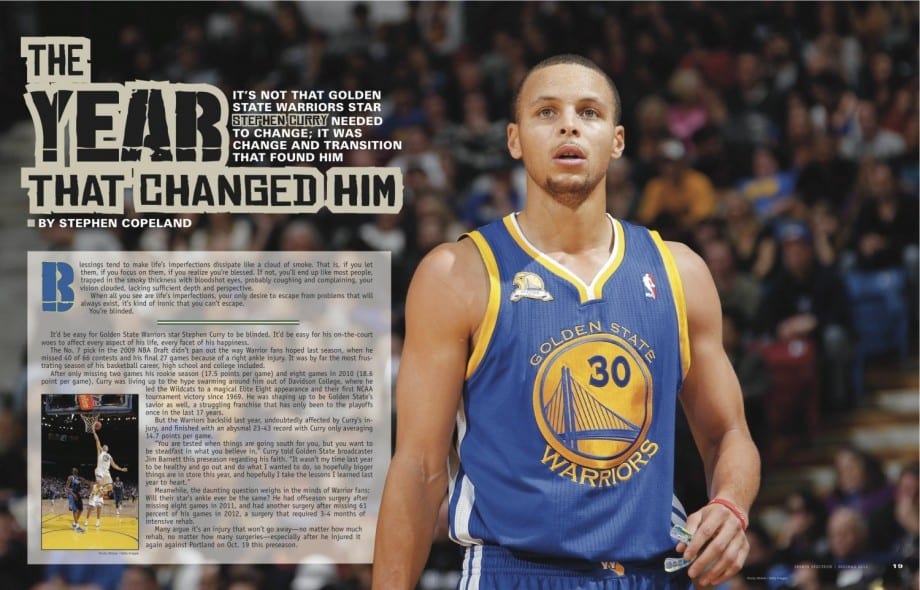 Blessings tend to make life’s imperfections dissipate like a cloud of smoke. That is, if you let them, if you focus on them, if you realize you’re blessed. If not, you’ll end up like most people, trapped in the smoky thickness with bloodshot eyes, probably coughing and complaining, your vision clouded, lacking sufficient depth and perspective.

When all you see are life’s imperfections, your only desire to escape from problems that will always exist, it’s kind of ironic that you can’t escape.

It’d be easy for Golden State Warriors star Stephen Curry to be blinded. It’d be easy for his on-the-court woes to affect every aspect of his life, every facet of his happiness.

The No. 7 pick in the 2009 NBA Draft didn’t pan out the way Warrior fans hoped last season, when he missed 40 of 66 contests and his final 27 games because of a right ankle injury. It was by far the most frustrating season of his basketball career, high school and college included.

After only missing two games his rookie season (17.5 points per game) and eight games in 2010 (18.6 point per game), Curry was living up to the hype swarming around him out of Davidson College, where he led the Wildcats to a magical Elite Eight appearance and their first NCAA tournament victory since 1969. He was shaping up to be Golden State’s savior as well, a struggling franchise that has only been to the playoffs once in the last 17 years.

But the Warriors backslid last year, undoubtedly affected by Curry’s injury, and finished with an abysmal 23-43 record with Curry only averaging 14.7 points per game.

“You are tested when things are going south for you, but you want to be steadfast in what you believe in,” Curry told Golden State broadcaster Jim Barnett this preseason regarding his faith. “It wasn’t my time last year to be healthy and go out and do what I wanted to do, so hopefully bigger things are in store this year, and hopefully I take the lessons I learned last year to heart.”

Many argue it’s an injury that won’t go away—no matter how much rehab, no matter how many surgeries—especially after he injured it again against Portland on Oct. 19 this preseason.

He returned for the start of the regular season—an 87-85 victory over the Suns, the same day the Warriors extended his contract by four years and $44 million—but Warrior fans can’t help but wonder: How long will he last?

Ayesha Curry wonders how he does it—how he comes home every day, the weight of Warrior basketball redemption on his shoulders, the frustration of ankle injury after ankle injury, surgery after surgery, rehab after rehab, and doesn’t bring any of it into the household. None.

His wife of a year and a half—who he met at the age of 15 in youth group at Central Church of God in Charlotte, N.C. (where they also married on July 30, 2011)—says it’s because he’s steady. Some think he’s emotionless—his monotone voice prevalent in interviews (unless you get him talking about golf, Charlotte, or Christian rapper Trip Lee)—but he’s really just steady.

“Stephen,” she’ll say to him. “I’ve never heard you complain about anything.” She says it’s something she tells him rather frequently.

He’s not lackadaisical; he has perspective. In his excitement, he’s no Tim Tebow (not that displaying passion is a bad thing). In his disappointments, he’s no Cam Newton (not that sulking in the media room is a bad thing, er, no comment). He is never too high; he is never too low. When he scored 33 points against Wisconsin and captivated the nation as he led 10th-seeded Davidson to an Elite Eight appearance, the most you saw out of him was a fist pump. When he missed 61 percent of the Warriors’ games last season, the most you heard out of him was that it “challenged my patience.”

“He’s had a pretty rough year and a half when it comes to his ankle injuries,” Ayesha says. “But there has never been a day that he has had a frown on his face…It’s to the point where I’m in awe and shock. How do you not bring all of that stress home with you? He comes home with a smile on his face and happy. I appreciate it.

“Nothing really ever gets him down too much. I think that a part of that is because he knows how blessed he is, and all of the wonderful things in his life outweigh the things that could be better.”

And that’s Stephen Curry. The smoke—his trials—it dissipates around him because the penetrating air—his reality—is too encouraging to cloud his vision. 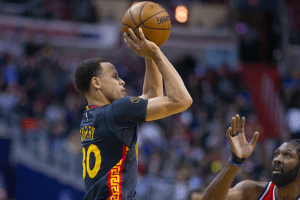 But when God is the one writing your story, Stephen and Ayesha will tell you that He often leads you to places you can’t fathom, places that force you to grow and rely on Him. In a nutshell, this is it:

July 30, 2011: Ayesha and Stephen marry.
Soon after, 2011: They move their belongings from Charlotte to California.
November, 2011: Three months into marriage, they discover Ayesha is pregnant.
July 19, 2012: Their baby daughter, Riley, is born. Stephen becomes a father at 23. Ayesha becomes a mother at 22.

“It’s been a whirlwind,” Stephen laughs. “I had to grow up, for sure…We wanted kids, but we didn’t think it would happen in our first three months of marriage,” he continues laughing.

Ayesha says she and Stephen are still in shock they are already parents in their early 20’s. “She’s a great baby, and we just kinda tuck her in our back pocket and take her wherever we go,” she laughs. “Even to this day, we haven’t had time to process what has really happened. We are still like, ‘Oh, we get to keep her?’”

It’s in the context of his family that you grasp the depth of Stephen’s personality—his desire to be a leader and carry his family in the right direction, his passion for his faith.

“He (God) has given me a lot of responsibility,” Stephen says. “He’s encouraged me to really be the spiritual head of the house He has called all men to be. It’s easy when you’re by yourself to be selfish about it, but when you have other people you are accountable for—emotionally, spiritually, physically—it’s a different ball game. For me, being the one everyone is looking to for spiritual guidance when it comes to leading our family in the right direction, it’s a big responsibility, but I can’t thank God enough for that.”

Ayesha says that she and Stephen both have the Bible app on their phones and either read or pray together every morning. “He is doing an incredible job,” she says. “I can’t begin to tell you everything—how I wake up and see how amazing and strong he is. He really is changing the stereotype of an NBA player. A lot of that has to do with the way he was raised. It also has to do with a lot of the decisions he made in his life. There is just really no option. It’s the way we live. It’s who we are, and it’s what we represent.”

Stephen embraces leadership both on-the-court and off-the-court. He feels a calling to, not only lead his family, but also go against the grain in the NBA, where players can potentially carouse and sleep with whomever. They are the most recognizable athletes on the planet, and they can do whatever they want, for the most part. The world is at their fingertips.

“I’m in a different demographic than most of the players and most of my teammates,” Stephen says. “Totally different situation. Different priorities. Different interests. Me, personally, battling being a part of the team and not being the odd ball out—that’s the hardest thing to balance. My priority is to be a man and child of God and not get sucked into the temptations a lot of guys don’t have a problem getting into. Family definitely helps me in that regard because if my faith carries them and they’re happy, I know I’m doing the right thing.

“It’s very humbling to know I’m able to be on the stage that I am, and I think God has put me in this situation to change this perspective on what it is to be a man of God and a player in the NBA. I want to use the gifts God gave me on the basketball court to uplift His name. That’s at the forefront of why I play the game.

“Being a father and a husband, I’m hopefully able to speak to a lot more people who are going through the same thing. It’s nice to talk to them. It’s pretty powerful how many people God has put in my family’s path in the year and a half we have been out here on the west coast. It’s amazing, that if you’re open to it, ask God to keep your eyes open, and He’ll put you in situations to witness and make people stronger.”

A week or two ago, Ayesha sent Stephen a text while he was on the road. It was Ephesians 3:20: “Always giving thanks to God the Father for everything, in the name of our Lord Jesus Christ.”

And somehow, that sums up the last 18 months perfectly.

This story appears in the October 2012 issue of Sports Spectrum Magazine.
Support our ministry and subscribe here.

THE INCREASE: Basketball Does Not Define Me – Semi Ojeleye

THE INCREASE: Laughter is the Best Medicine - Steven Souza

Chiefs owner Clark Hunt after 2nd AFC title: 'The Lord has blessed our family in so many ways'