UCLA won the beach volleyball national championship for the first time in school history. The Bruins took down Florida State 3-1 on Sunday afternoon in Gulf Shores, Ala.

The win didn’t come without any adversity for the top-seed in the tournament. UCLA came in riding high on a 30-game winning streak. The Bruins won the first match 3-0 against Florida International, but were upset by Florida State in the next round 3-1.

In the elimination bracket, UCLA beat LSU and two-time defending national champion USC on Saturday. On Sunday, the Bruins held off Hawaii 3-2 before beating Florida State for the national title. UCLA finished the season 40-4.

The journey to the national championship started in 2013 for Bruins head coach Stan Metzger. His first coaching move was to hire his friend and UCLA alum Jenny Johnson Jordan, who’s pro volleyball career ended the year prior.

“Stein Metzger and I were freshmen together at UCLA and he was coaching the beach team, and asked me if I would join the staff,” Johnson Jordan recalled to Sports Spectrum. “So at that point we were just starting the program; it was pretty limited. But since then it’s really grown.”

Once Johnson Jordan came on staff, one of her first points of emphasis was to teach her players how to adjust from playing on the hardwood to the sand.

“People assume that if you’re an indoor player then it’ll actually translate to the beach, and that’s just not the case,” Johnson Jordan said. “On the beach, there’s only two of you on one side and you have to be pretty skilled at every skill. So you have to pass. You have to set. You have to hit. Sometimes you get to specialize a little bit more with a blocker and offender. But other than that, you have to be able to execute every skill well.”

One of the best ways she discovered how to help the players was to demonstrate in practice the type of intensity and communication she looked for on the court.

“Sometimes they have to see it to understand what it is that I’m asking and how it’s different from what they’re doing,” she said.

The teachings on the beach carries over to the student-athlete ministry she does with her husband Kevin Jordan called “4TheJourney.” It’s a play off the uniform number four, which both wore while playing in blue and gold from 1991-95.

“Our transformation as believers really happened in college,” Johnson Jordan said. “That was the most pivotal time for us and so I believe that’s why we’re back in the college setting, working with college athletes.” 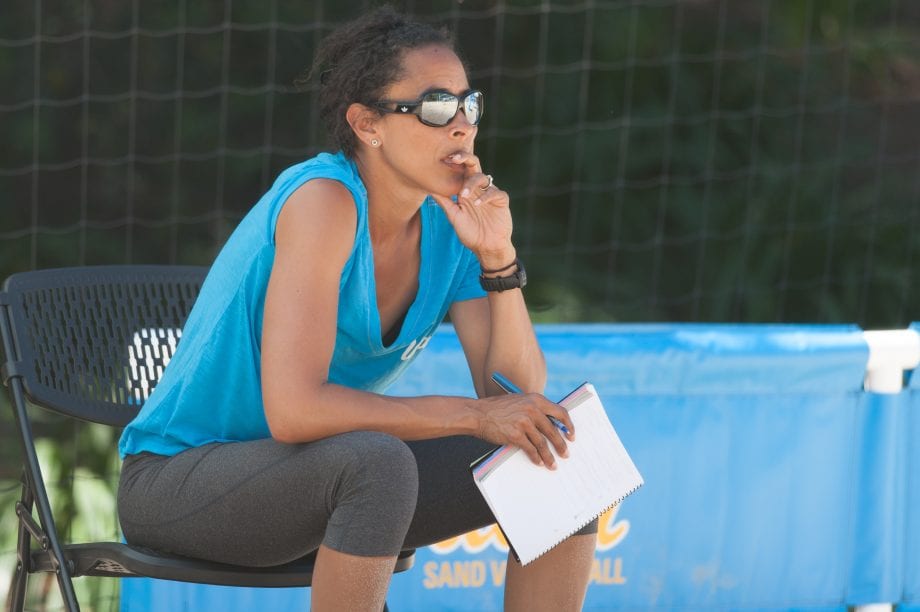 The two invest spiritually in the lives of coaches and athletes on campus — leading Bible studies, serving as chaplains for teams that request them (including the football and women’s basketball teams), having men’s groups called “Man2Man,” leading a weekly student-athlete chapel gathering called “Bruin Varsity Life,” and having one-on-one mentoring sessions with athletes. Working with her husband on campus has made the work a delight.

“It’s a beautiful thing and something sweet and special that we can share together,” Johnson Jordan said.

Walking through life with athletes also reveals many of the heavy topics some of them experience, such as anxiety, depression or even disordered eating. Those are tough subjects to navigate, but Johnson Jordan takes comfort knowing she doesn’t need to have all the answers. God will handle the situation.

“For me I have that peace, so it frees me up to be a listening ear and to offer very pragmatic help when needed, and then know at the end of the day it’s going to be in God’s hands and He will take care of it,” Johnson Jordan said.

Johnson Jordan now adds another national championship to her mantle. She won a championship at UCLA as a volleyball player in 1991. But the taste of victory doesn’t take her away from her mission to use her faith and and volleyball experience to grow leaders on campus.

“I love to compete,” Johnson Jordan said. “I love to train and play the game and to coach, but to me there’s always the bigger picture.”