Life is 10 percent what happens to you, and 90 percent how you deal with it.

Those words are right from the mouth of Trevor Harris, the Ottawa Redblacks quarterback who has experienced more hardship in his journey than many will face in a lifetime.

“Consider it pure joy, my brothers and sisters, whenever you face trials of many kinds, because you know that the testing of your faith produces perseverance.” — James 1:2-3

The 32-year-old Waldo, Ohio, native and former standout at Edinboro University of Pennsylvania is enjoying life as an elite gunslinger in the Canadian Football League. He won a Grey Cup in 2016, had a baby boy shortly after, and if not for an injury-shortened 2017, he would have smashed the 5,000-yard mark in only his second season as a full-time starter.

It would be safe to say from the outside looking in that Harris has made pretty good with the 10-90 split during his days north of the border.

But life wasn’t always like that for the seven-year CFL veteran, and his mother, Suzanne, has been pivotal in modeling how to navigate trials when they come his way.

“I call my mom every morning and remind her that I love her,” he says. “I’m a momma’s boy and completely OK with it. When you almost get your mother taken from you a couple of times, it puts it into perspective.”

In 2009, she was diagnosed with Stage 3 breast cancer and battled through nine months of chemotherapy and radiation. Suzanne lost all her hair and struggled to get out of bed most days, but still managed to attend every one of his college football games — a three-and-a-half-hour drive.

“She used to sit in her car and listen to the radio because she couldn’t stand to see those big mean men hitting me,” chuckled Trevor as he choked back tears. “She provided a lot of energy for us, and kept reminding us that God had a plan through this. No matter what life is gonna throw your way, she’s been relentless in attacking the adversity she’s gonna face.”

Trevor and his family helped her walk through it, and they beat the cancer.

After college, Harris went undrafted in 2010 and spent the next two years jumping from camp to camp in the NFL. From 2010 with the Jacksonville Jaguars, he then spent time with the Seattle Seahawks, Buffalo Bills, Cincinnati Bengals, Arizona Rattlers (AFL), Hartford Colonials (UFL), Sacramento Mountain Lions (UFL), Orlando Predators (AFL) until finally landing in Toronto with the Argonauts of the CFL in 2012.

“That was all within a two-and-a-half-year stretch,” he says. “Football had kind of put me through the washing machine.” 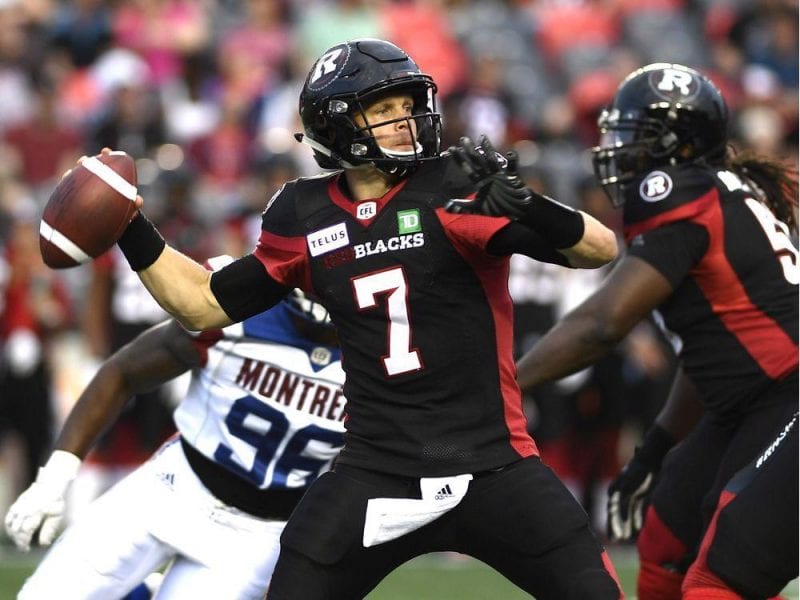 Then came the fifth day in training camp in a foreign country after an exhausting two years of moving all across the U.S. He found himself in a new city, a new training camp in an unfamiliar part of North America, all to keep the dream alive and pursue his passion. This time it was a totally new three-down game with a new football, learning yet another new playbook. That’s when his world was altered again, as he received a devastating phone call from one of his sisters.

“Hey Trevor, don’t panic,” she said. “But Mom and Dad got into a serious motorcycle accident and are being transported on life support.”

Suzanne had a broken orbital bone, a concussion and a shattered middle finger among many other scrapes and bruises. His father, Tom, had 75 stitches in his face, with a broken back and neck. His mother asked his sister not to call Trevor so he wouldn’t worry about them.

“I thought to myself, maybe at this time this football thing wasn’t for me,” Trevor said.

He got on the phone with his father and told him that he was going to call it a career, that he needed to be home to take care of them.

“Dad said to me, ‘Trevor, if you come home, I’ll make your face look like mine. This dream is just as much our dream as it is yours.”

Those words solidified Harris’ decision to stay in Toronto, where he spent four seasons until moving on to Ottawa.

“Everybody is gonna have those moments in their life where they throw their arms up and say, ‘What’s God doing? Is He really up there?'” Trevor says. “It’s our duty as Christians to truly believe and trust. At the other side of those trials, I truly believe is greatness.”

But if you spend two minutes speaking to the joyful, blue-eyed momma’s boy, you won’t hear him talk about how many trials he has been through in his life. The opposite, actually. He insists everyone has a story, and how hard you seek after the character of Christ will truly define the person you become.

“Stay steadfast in the faith and stay planted in the right area (the Bible). If you focus on the root, the fruit will come,” he says.

Trevor Harris stayed planted in his journey in the Canadian Football League, and after three seasons as a backup in Toronto, he was given his opportunity to harvest in 2015. The Argonauts lost their starting QB in their season opener, handing the keys of the offense over to the tried-and-tested Harris.

He threw for almost 4,400 yards that season, to go with a career high of 33 touchdowns, which made him a massive free agent commodity in the offseason. The next year, Harris led the Redblacks to a Grey Cup title in only their third year of existence.

Outside of football, Harris spends his free time reading all kinds of books on leadership. He puts his faith and family first, and wants to be known as a man who loves God and loves other people. And someone who can help others find hope through difficult circumstances.

It is safe to say, Harris’ CFL career, faith and family are ripe after many years of planting seeds in perseverance.

RELATED STORIES:
— THE INCREASE: Tyler Clutts – Not My Plan But His
— 49ers’ Marquise Goodwin buys a new house for his mother and sister
— Vikings QB Kirk Cousins: ‘The foundation of my life is the Bible and the Gospel’
— Josh Mitchell on pitching in Royals organization: ‘God was every bit the reason I made it’