This year’s Super Bowl won’t have many fans in attendance due to the COVID-19 pandemic, but players like Kansas City Chiefs fullback Anthony Sherman are still hoping for a full stadium — one that represents a larger mission.

Sherman and others in the professional sports world are partnering with Compassion International’s “Fill the Stadium” initiative to fund nearly 70,000 children whose sponsorships have been impacted or delayed by the COVID-19 pandemic.

“It was one of those things where you don’t realize there’s that many — 70,000 kids from when this pandemic started until about now that would’ve gotten sponsored and taken care of and been able to have food, and have water, crucial stuff that they need, especially during a pandemic,” Sherman said Monday on the Sports Spectrum Podcast.

Fill the Stadium seeks to provide necessities like food, nutritional supplies, hygiene products, and medical screening for COVID-19 to children and families in the Compassion program. Compassion receives a large number of its sponsorships and support at large events like concerts, conferences and sporting events. With most of those either being canceled or significantly limited in attendance during the pandemic, sponsorships are down.

“For us, it was one of those things that was easy, a no-brainer for us,” Sherman said about joining this initiative. “Definitely jump in and help as best as we can and spread the word. All we’re trying to do now is just close the gap for however long this is until they can start having concerts again and sporting events where they can have that Compassion table and sponsor a bunch of kids and get these people taken care of.

“Just trying to close the gap and be there for these kids in a time of need.”

Sherman will be playing in his second straight Super Bowl on Sunday with the Chiefs and hoping to win back-to-back championships, but he’s also hoping this year he can repeat another trip — a trip to Nicaragua with Compassion. Sherman and his wife Jessica traveled to the Central American country last year shortly after the Chiefs’ Super Bowl win, and it was a trip that changed their lives. It opened their eyes to the reality of what the children and families in the program live through each day.

“We thought poverty was just not having some things,” Anthony said in a video interview with Compassion. “These people don’t have things to survive and live.”

Congrats to @Shermanator_42 🎉 He's headed to the Big Game for the 2x. Soon after Kansas City clinched the victory in 2020, he & his wife Jessica took a trip with @compassion to see the life-changing work happening in Nicaragua. #fillthestadium Watch:https://t.co/iKTBWQEYsh

There are a number of ways that people can get involved with sponsoring a child through Compassion. With people not able to attend the Super Bowl or other events in person, Compassion is particularly hoping sports fans will support a child through the Fill the Stadium initiative. Donations of any amount are accepted, though fans are encouraged to consider their average game-day expenses as an offering.

“Being able to see what’s happening, it really makes it super personal,” Jessica said in the video interview. “You’re not just sending money in hopes that your money is making a difference. This is a real relationship that you’re going to have.”

It also helps put things in perspective for life in countries like the United States, compared to what others experience in less fortunate situations, Anthony said.

“You’re just given the perspective of if you hold God first and have Him in your life, all the stuff around — technology — is pretty pointless. You don’t need it,” he told Sports Spectrum. “To see the pure joy in those kids’ hearts and knowing where their heart is, it was one of those things where I was like, ‘Yeah, I’m getting aboard and I’m rolling with these people because they’re stopping poverty in the most extreme way.’” 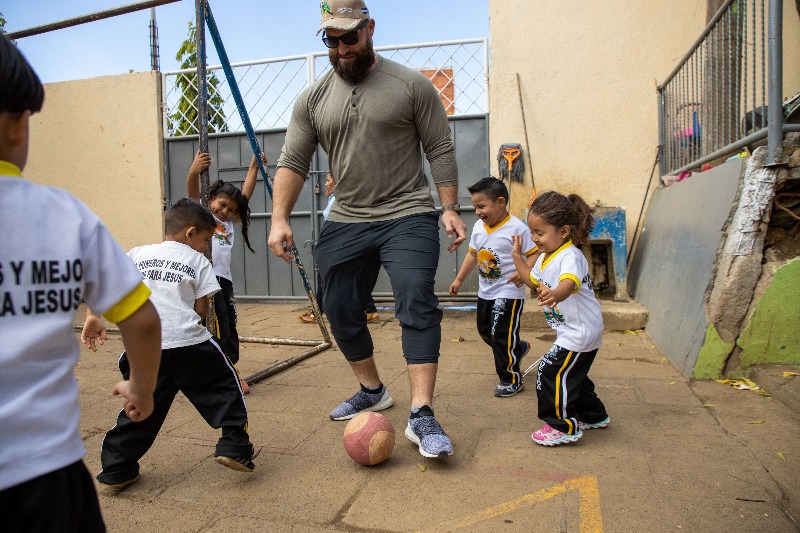 Anthony Sherman playing with kids during his trip to Nicaragua. (Photo courtesy of Compassion International)

Anthony said his relationship with God has strengthened a lot in the past year, and a big part of that was when he missed three games this season due to COVID-19. After his wife tested positive, he stayed in a hotel for nine days per NFL protocol, and on the ninth day he tested positive.

It broke a 117-game active streak for Sherman, but he said it was actually a good thing for him and his relationship with God. He spent a lot of that time alone in the hotel room watching sermons and messages from the team chaplain, Marcellus Casey.

For anyone interested in joining players like Sherman to help Fill the Stadium and support children in need, head to fillthestadium.com/give to learn more.

For Sherman, this is just the start of his partnership with Compassion and his efforts to help people.

“They are determined to reach every kid that possibly needs it,” he said. “We’re just so excited to be part of this great organization. We’re going to be in this for a long haul.”