Jace Ward thought he was getting on a Zoom call to talk to a psychologist about the emotional trauma he could experience following a grueling trial for his cancer treatment.

“My first thought was, ‘Jay, you can’t be on this call. This is about to be serious,’” Ward told Sports Spectrum this week. “Looking back, that’s really funny now.”

Instead, Feely — who Ward has struck a friendship with — was there to tell him he was going to the Super Bowl thanks to Kansas City Chiefs fullback Anthony Sherman. After hearing Ward’s story and knowing that he’s a lifelong Chiefs fan, it was an easy decision for Sherman.

In early 2019, Ward was involved in a rollover accident but walked away from it with no injuries. That alone was surprising enough that the officer who worked the accident investigation visited him about a month later to check on him.

Ward was indeed experiencing some double vision, and fearing it could’ve been a lingering result of the accident, he had a CT scan performed in May 2019. That revealed what was really going on. He had Diffuse Intrinsic Pontine Glioma, a particularly deadly form of brain cancer typically found in children, but equally as lethal to young adults like him, a 21-year-old senior at Kansas State University.

Ward asked for the reality of the situation, and the doctor hesitated before Jace’s mother, Lisa, nodded to signal it was OK to deliver the news. He uttered two words no patient or parent wants to hear:

“But before I nodded,” Lisa told Sports Spectrum, “Jace said, ‘Doctor, I’m not afraid to die. I’m afraid I won’t have enough time to make an impact.’ That’s truly how this began.”

What’s happened since has been nothing short of a miracle, Lisa said.

As recently as the beginning of January, Jace couldn’t get around without a wheelchair. He had lost almost all of his hearing from the tumor. He couldn’t send text messages anymore because his hands stopped functioning like normal. He was slurring his speech and having a hard time swallowing.

It appeared his body was shutting down on him. Given the path the tumor was taking, it looked like he maybe had two to six weeks left to live.

“I was reaching out for God because I felt like my time was coming very quickly,” he said. “I knew that I didn’t understand what God’s plan was, but I was comfortable with whatever that was. I knew that God had a plan for me. I don’t understand it. I don’t know what it is. I couldn’t imagine why He would want to end my life early, but I was in a state where I convinced myself not to question it.”

Doctors at Stanford University decided to run Jace through a CarT Cell Clinical trial that had never been tested on any other patient before. Jace would be the “guinea pig.”

Through two treatments, it appears to be working. It shrunk his tumor 25 percent overall and 50 percent in an important part of his brain, Lisa said. “He’ll continue that treatment to try and chip away at the tumor.”

He got home from his treatment on Jan. 20, and he’s now going up and down stairs every day, talking and hearing just like normal, sending text messages like any other Gen Z’er, and eating and swallowing as he’s always been able to.

“I was reaching out for God because I felt like my time was coming very quickly. I knew that I didn’t understand what God’s plan was, but I was comfortable with whatever that was. I knew that God had a plan for me.” — Jace Ward 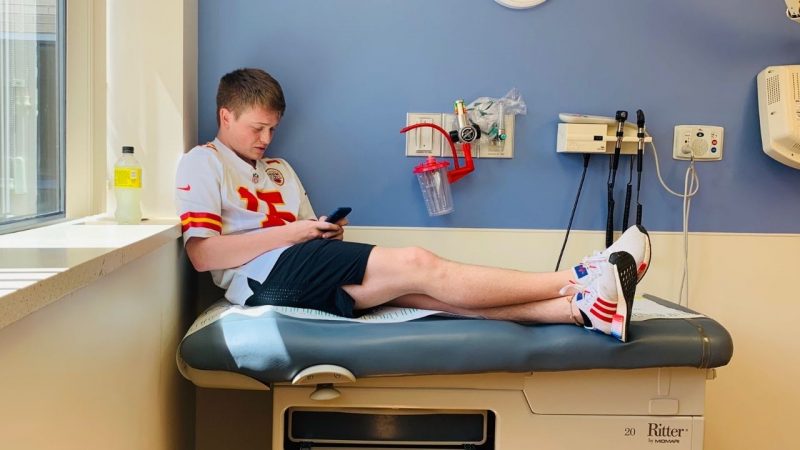 Jace Ward checks his phone while at the hospital during one of his cancer treatments. (Photo courtesy of Lisa Ward)

Perhaps even more impressive, he started back on his classes at Kansas State on Jan. 25 and works every day. He’ll continue the treatment for as long as his body can withstand them to try and chip away at the tumor.

“As a believer, I’m just going to say these are all God things,” Lisa said.

Feely originally connected with Jace through the #ChadTough Foundation, named in honor of longtime University of Michigan football coach Lloyd Carr’s grandson, Chad Carr. It seeks to help others diagnosed with DIPG.

Knowing that Jace has been a lifelong Chiefs fan, Feely reached out to Sherman, his former teammate, to see if the Chiefs could possibly do something as an organization to get Jace to Super Bowl LV in Tampa. Sherman didn’t have to be convinced, and instead decided to take care of it himself.

“I just had this feeling in my heart,” Sherman said during his Super Bowl media session this week. “I’ve got extra tickets and I can provide those for him and let him fulfill a lifelong dream … To see his reaction was awesome, and I hope to — after the season, when things kind of die down — we can get together, for sure.” 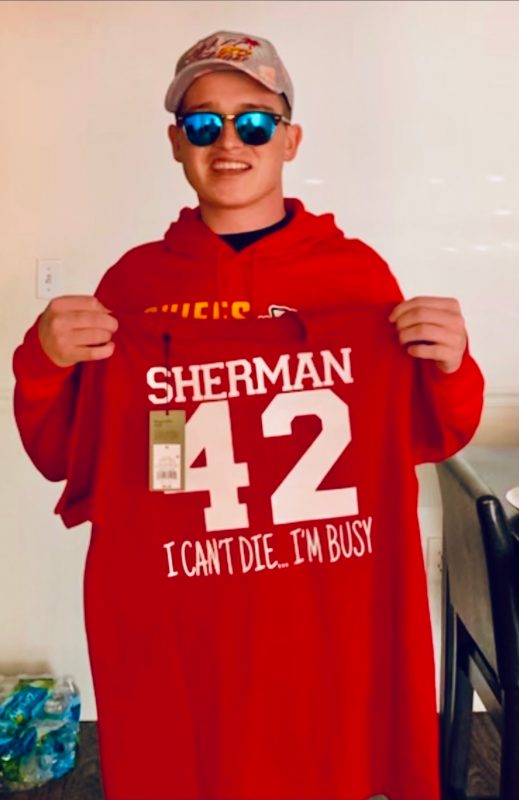 Jace and his father arrived in Tampa on Thursday on a private jet — the best part of his experience so far, Jace said — and, on top of attending the game, will get to participate in a slew of Super Bowl weekend activities, and sit in on a CBS production meeting with Jim Nantz, Tony Romo, and Patrick Mahomes.

It’s hard for Jace to put into words the excitement he felt when he received the news, but his face said it all. Because of his condition, one of the symptoms is that when he gets excited, his jaw locks up.

“Normally it’s not very bad and it’s not something that’s too concerning, but I got so excited that my jaw locked up and I couldn’t open my mouth to speak,” he said.

He said he and his father have watched hundreds of Chiefs games together. Having this experience means more than he can describe and said he fully expects to cry at the game.

Who can blame him?

“Being able to watch the Super Bowl with my father, especially after the long couple of years we’ve had, it’ll be something I’ll definitely never forget and something I’ll cherish forever,” he said.

Jace hopes to be a lawyer after graduating from Kansas State. While the prognosis for his cancer is still terminal, there’s no telling what could happen from the trials. He’s the first person to try them and could end up being a miracle story, Lisa said.

No matter what happens, he’s at peace.

“This has strengthened his faith and created clarity in a way that I just can’t imagine ever happening without cancer,” Lisa said. “He is so clear that his purpose is for people to know about this deadly cancer, but also know the peace that comes from walking with your Savior — that there is eternity and there are worse things than death that are just avoided by having trust in God to know what happens.”

For Sherman, this is just one more addition to the growing list of good deeds he’s been doing lately.

He’s partnering with Compassion International to help “Fill the Stadium” — an initiative to fund nearly 70,000 children whose sponsorships have been impacted or delayed by the COVID-19 pandemic. He spoke on the Sports Spectrum Podcast last week, and said he hopes to take another international trip with Compassion soon.

This week, though, Sherman made headlines for his response to what started as a prank from his friends — former major leaguer Adam LaRoche, former Patriots offensive lineman Matt Light, and teammates Dustin Colquitt and James Winchester.

Together they conspired to log into Sherman’s Twitter account and tweet out a fake giveaway that involved him giving away his personal Ford F-250 truck. People were directed to a live website that collected entries by donation. The higher the donation, the more entries.

The money was said to be going to support combat warriors and the Kansas City initiative to fight human trafficking. Proceeds also benefit the E3 Ranch Foundation.

You know what I love more than my truck? My Freedom!  Join me in fighting for those who don’t have it!  Click https://t.co/zFTS247Vf0 to win my truck, I'm giving it away!#shermfightsforfreedom #HumanTrafficking #Chiefs #Runitback #Superbowl #NFL #Ford pic.twitter.com/WQsFOOHRCK

“It wasn’t necessarily my idea at first,” Sherman said on the Pat McAfee Show. “I had a couple of buddies of mine who decided to figure out a way onto my Twitter account and put this up as a prank. It kind of gave me two options: it was like, ‘OK, you can look one way or you can look the other way,’ so I just decided, you know, it is only a truck.”

I don’t say this lightly… this might be my favorite prank ever executed. It was spiteful.. it was well thought out.. it worked PERFECTLY.. AND it’s helping an AMAZING cause

Be a friend, tell a friend.. @Shermanator_42, got GOT. What an absolute hero dude 😂😂😂 pic.twitter.com/TR23Vrzyxk

About a month ago, Sherman dumped about 12,000 Oreo cookies LaRoche’s vehicle as a prank. As a response, LaRoche set up the website and conspired with Colquitt and Winchester to send out the tweet. LaRoche sent Sherman a video describing what he did and Sherman watched it after practice one day. By then, it was too late.

“He said, ‘By the time you’ve seen this video, there’s probably 30 million people that have seen this tweet and you don’t have many options,’” Sherman said. “I was more caught off guard by how he was able to figure out a way into my Twitter.”

As of Thursday, more than $50,000 had been raised, McAfee said on his show. Sherman will announce the winner on February 26.

“It’s been a prank since Day 1 and I hope it raises a ton of money,” Sherman said.