It was no surprise to hear Demario Davis thank God in his acceptance speech after receiving the Bart Starr Award at the Super Bowl Breakfast on Saturday. But he wanted to make it clear that he wasn’t just glossing over it.

“I always hear when somebody wins an award they say ‘thank you’ to God, but I always wish they spent more time on that part,” the New Orleans Saints linebacker said. “I want to do that because I’m so grateful to Him.”

While Davis is indeed grateful to God for the award — one voted on by players for someone who exhibits high character and service to their community — it’s much deeper than that for him. He might not have been in that position if he hadn’t encountered God when he did.

Davis quoted Ephesians 2:4-5, which says, “But because of His great love for us, God, who is rich in mercy, made us alive with Christ even when we were dead in transgressions — it is by grace you have been saved.”

“For me, when I look back on my life, I was dead in my transgressions — a kid who was expelled from high school, a kid who went to jail his freshman year in college,” Davis said. “I was headed down the wrong path fast.”

That’s when Davis, then a standout at Arkansas State University, struck a relationship with team chaplain Chuck McElroy, who discipled him and led him to Christ.

“He saved me from myself and he gave me a life. He also gave me purpose,” Davis said. “So for that, I am forever indebted to God. I will always live on mission for Him.” 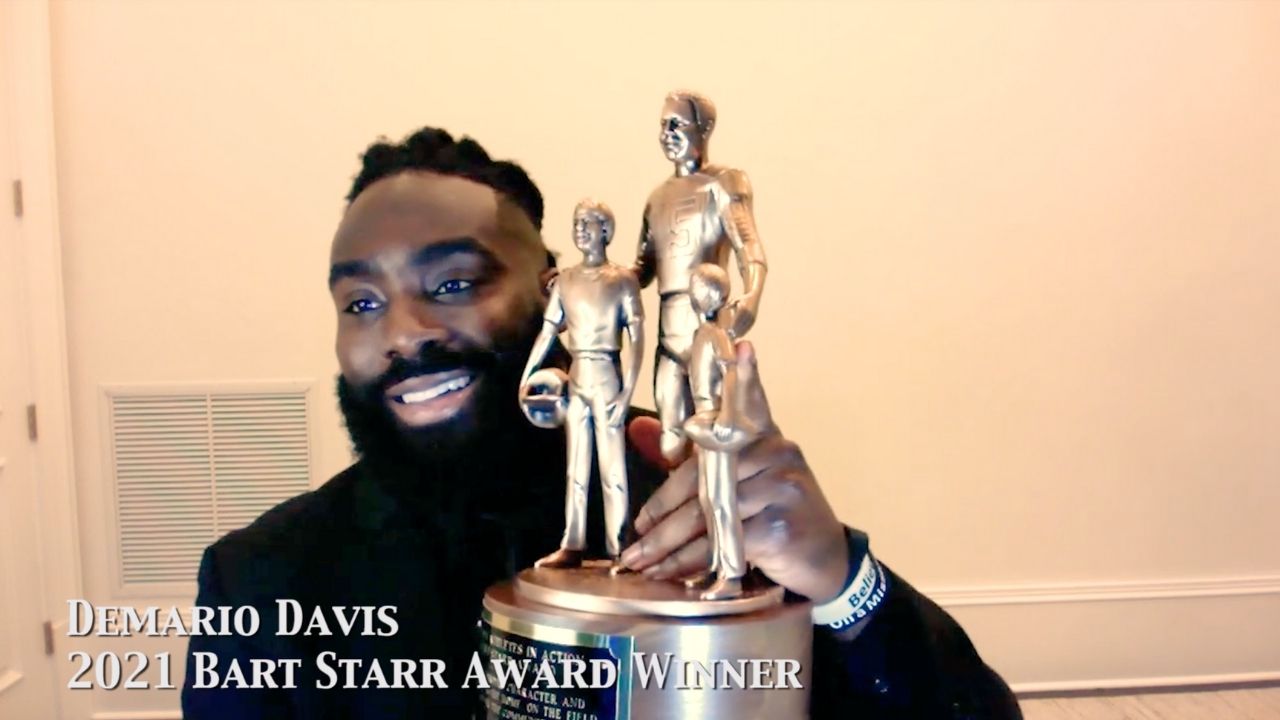 Davis has become a star in his nine NFL seasons — a first-team All-Pro in 2019, and second-team in 2020. A third-round draft pick of the New York Jets in 2012, he spent his first four years there, then one in Cleveland, then one back with the Jets, before joining the Saints in 2018. He credits Jets chaplains Adam Burt and Shino Prater with helping him in his faith journey.

Davis was presented the Bart Starr Award at the annual breakfast event put on by the sports ministry Athletes In Action. Typically held in person the day before the Super Bowl, this year’s event was a virtual web premiere due to the COVID-19 pandemic.

Davis earned the award for the community service and racial justice work he did the past year.

Davis and Saints teammate Terron Armstead launched the #SayHerName initiative with a goal of raising awareness around the current state of Black women in America, and help affect systemic change both in New Orleans and across the country. Davis also partnered with United Way to help provide assistance to frontline hospital workers battling the COVID-19 pandemic.

His own foundation, Devoted Dreamers, equips the next generation of leaders with the tools to be successful mentally, physically and spiritually.

Starr’s widow, Cherry, and his son, Bart Jr., were both on hand to present the award and congratulate Davis on his honor.

“If my dad were still alive, he would be honored beyond belief that Demario is receiving this award,” Bart Jr. said. “I think the primary one is that what he is doing through his foundation so closely parallels with what my dad tried to do with his boys’ ranch in Wisconsin for 56 years — that is to try to reach deep into the hearts of those youngsters in need, who might otherwise wind up on a path none of us would want to see. That’s something that inspires us all.”

On top of what Davis did on and off the field to serve others, he was fighting a battle of his own at home. His youngest daughter, Carly-Faith, was diagnosed at just 10 months with Retinoblastoma, a rare optical cancer that affects only 300 children per year in the U.S.

The large tumor had already consumed her left eye and had pushed on her pupil, leaving her blind in that eye as the tumor advanced. Doctors were unsure if the cancer had spread to her right eye or into her brain. Davis and his wife, Tamela, ultimately opted to go with the doctors’ recommendation to remove her left eye.

This story struck a cord with Cherry Starr. She said she and Davis now share a “special bond.”

“I shared with him that Bart and I started a foundation here in Birmingham and it is now going nationwide, but it’s the Bart and Cherry Starr Foundation for Children with Cancer,” she said. “That’s what Bart was all about, was giving back.”

Davis said the past year was indeed tough, between his daughter’s battle with cancer and trying to play through a pandemic.

“This was the first year that we were split as a family and [Tamela] championed our household the entire time,” he said. “So in the midst of all this imbalance, she kept us stable. I am so thankful for her.”

He thanked the Saints organization as well, saying they have two important things in common.

“We love winning, and we love serving our community,” he said. “The organization really supports its players and the work they want to do in the community.”

“Honestly, I cannot think of anyone more deserving or someone that better represents what it is to be a teammate, to be a man, husband, father, and to be an incredible community leader,” he said. “Man, you encompass and embody all of those things.”

The event also included a virtual roundtable discussion with former Saints tight end Benjamin Watson, Hall of Fame coach Tony Dungy, Indianapolis Colts coach Frank Reich, and television personality James Brown about racial justice and faith, and what next steps the country can take to progress toward racial equity. They spoke about the turbulent events of 2020, namely the George Floyd murder, that put the conversation of racial justice back under the spotlight.

Each of them pointed back to their faith as the foundational piece.

“When it comes to the area of race and justice, the difference is because we’re finite human beings, as a White man I cannot take on black flesh,” Reich said. “I’ll never know what it’s like to be a Black man. I’ll never know what it’s like to face the oppression and the injustice that a Black man or woman has to take on. But what can I demonstrate?

“In some ways as Christians, we can still model the humility that Christ demonstrated. I believe that’s what the Bible calls us to demonstrate.”

Dungy added to that, saying humility is the key, and that people need to not just listen, but to learn.

“And not just learn, but to be moved out of humility to action, to serve,” he said. “To be humble is to serve others. In that way, we can follow Christ’s lead in this area of race and justice.”

We must have the “heart of God,” Dungy added.

“We can’t say, ‘It doesn’t affect me, so I’m not going to worry about it,'” he said. “That’s not a Christ-like attitude. Jesus would say, ‘No. If it affects My brother, if it affects the least of one of these, I should be concerned and I should step forward and do what I can.’”

Each of them spoke about love and service on top of education and listening.

“When we love, we act out of that love,” Watson said. “In Romans, the Bible says that God demonstrated His own love for us in this, that when we were yet sinners, Christ died for us.”

Watson later shared about John 3:16-17, and laid out the Gospel for viewers.

“We’re in a situation where we need the blood of Christ to make us just before Him,” he said. “It’s very simple: Through repentance and faith, and putting our faith and trust in what Jesus did on the cross, that’s how we get what the Bible calls eternal life.

“Eternal life is not just living in Heaven — that’s part of it — but the Bible says in John that eternal life starts now. Eternal life is knowing God and knowing Jesus, who He sent. He was fully God, He was fully man. He lived a perfect life, and because of that, He can take away the sin debt and pay the debt that we cannot pay. Not only that, the Bible says He rose again and right now He is seated at the right hand of the Father.”

Watson made a plea to the viewers and closed with a prayer.

“Now is a day of salvation,” he said, “by accepting through your belief and confession of your mouth in the Lord Jesus and what He did on the cross.”