Content for this story was provided by our partner, Compassion International. For just $38 a month, you can help rescue a child living in poverty. Visit Compassion.com/SportsSpectrum to help.

The sport of golf is undeniably individualistic. Individuals, not teams, win and lose; each person plays for him or herself. Yet every time PGA Tour golfer Cameron Tringale hammers a drive or sinks a putt, hundreds of lives in El Salvador benefit as well.

That’s because Tringale donates a portion of his golf earnings to fund projects in El Salvador with Compassion International. There are classrooms under construction at 20 Compassion centers in El Salvador as a result of Tringale’s gifts. He has also donated money for water filters in several other regions, and he sponsors a girl named Zuleima from Colombia.

God inspired Tringale to take action after a life-changing trip to El Salvador with Compassion in 2014.

“I thought I knew what poverty was, and it was just really eye-opening,” Tringale told Compassion after the trip. “The worst neighborhood of downtown L.A. or Miami or whatever would be the Ritz-Carlton-plus-plus.”

In El Salvador, 35 percent of the population lives beneath the poverty line. Only 50 percent of children finish junior high and 25 percent complete high school. 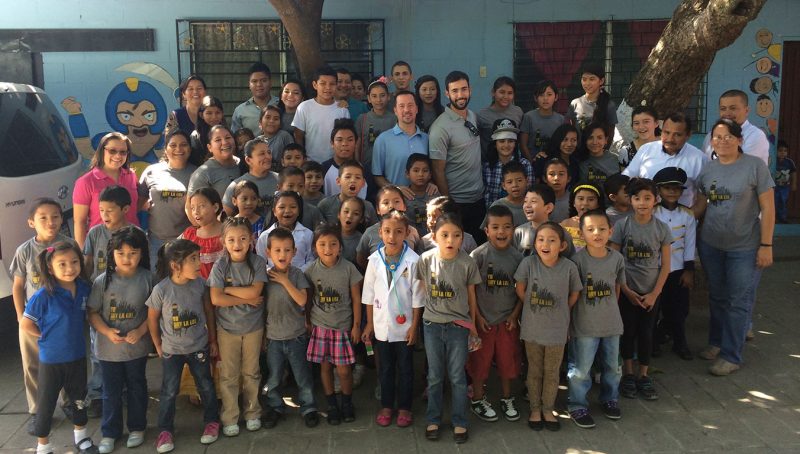 Cameron Tringale (center, gray shirt) with some of the children he met on his trip to El Salvador. (Photo courtesy of Compassion International)

Tringale had never before seen such poverty, much less experienced it growing up in Mission Viejo, Calif. A follower of Christ, Tringale realized in El Salvador just how much God had given him and how much he could give back.

“For some reason the Lord has given me this great opportunity financially and blessed my career,” Tringale said. “And I know He wants me to use it not for my own gain but to go and pass it on and use it for His glory and the good of others.”

Tringale’s donations have been a blessing to communities around El Salvador, but it was Tringale who was blessed when he saw the unwavering faith of people who had very little.

“The people living there have a need for their God every day, just from a physical standpoint,” he said. “They don’t know where their next meal is coming from; they don’t know if they’ll have medicine for their babies. So they’re leaning on Him for things that we all don’t think twice about.”

Tringale has never had to worry about those types things, especially now that he’s approaching $10 million in career earnings on the PGA Tour. He’s made the cut in 153 of his 253 career PGA Tour events with 19 top-10 finishes. The 31-year-old turned pro in 2009 after an illustrious career at Georgia Tech, where he was a three-time NCAA All-America selection (first-team choice in 2009). He was also named the ACC Freshman of the Year and a two-time Academic All-American during his collegiate years.

Still, as Tringale roams the lush greens of various courses around the world, the children he’s helping through Compassion are never far from his mind. After his trip to El Salvador, Tringale had Compassion’s logo embroidered on his golf club bag. It serves as a reminder that he plays for far more than just himself. No matter how he’s performing, he knows he’s been truly blessed so that he may be a blessing to others.

Would you consider helping a child living in poverty? For just $38 a month, you can partner with Compassion International to sponsor a child and bring a hope more powerful than poverty. Visit Compassion.com/SportsSpectrum to help.

North Carolina men’s golf team wraps up historic fall fueled by love for each other, faith in God