Another Angle: Cheapening the Brand 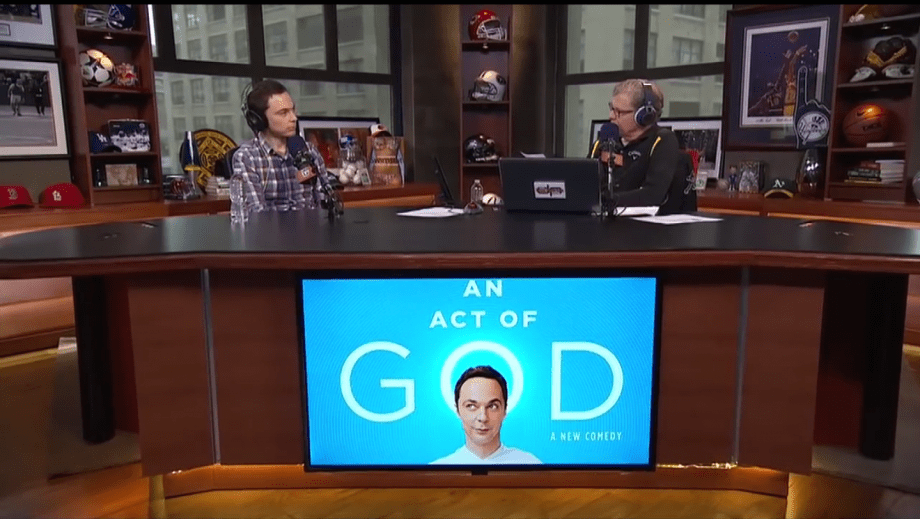 The other day, I was listening to The Dan Patrick Show on the way to work, as I usually do, and Patrick was interviewing Jim Parsons, who is most known for his endearing role as “Sheldon” in The Big Bang Theory. Patrick was talking to Parsons about the new Broadway play he was starring in called “An Act of God.”

Parsons explained in his interview with Patrick that the premise of the play was this: God, being “too unfathomable to human beings,” chose Parsons to communicate a number of things in which He wanted to set straight with His people. Patrick, who saw the play, mentioned to Parsons that the number of sports references in the production surprised him.

“Well,” Parsons told Patrick, “here’s what He (God) says (in the play about sports): He says that one of the things is that He’s a brand…And whenever He sees some backup wide receiver from some university on SportsCenter point to Him after scoring a touchdown, that cheapens the brand.”

Now, I recognize that “An Act of God” is far from a theology course at a respected seminary—it’s a comedy on Broadway and should be treated as such—but I found the whole “cheapening the brand” concept to be an interesting thought, one that I think is especially relevant today with everything that has been taking place in American society.

First, I think it’s foundationally important to note that God’s name cannot be cheapened because He will forever be on His throne, no matter what we, as people, say or do. But I think we can cheapen God’s name to one another whenever we use His name to push a personal agenda or idea or image. Doing this can have a serious, detrimental effect on someone else’s view of God. In an “An Act of God,” for example, Parsons said that God disproves of athletes flippantly and disingenuously pointing to the sky after a touchdown—because it has a detrimental effect on someone else’s view of Him and His brand. (For the record, I find guys like Stephen Curry and Tim Tebow to be bold, inspiring, and genuine when they express their faith, even publicly. They are not promoting anything; they are simply reflecting who they are, which is a beautiful thing. All of this ultimately comes down to intentions, which honestly is not for me to judge.)

However, I believe this idea goes far beyond athletics, which brings me to my point. So what does “cheapening the brand” look like on a daily sense? Let’s begin with something that most people use every single day, if not every single hour. Social media.

Never in the history of this world have we had the ability to communicate an opinion that could potentially be read by anyone or by people who we hardly know. And with all the polarizing happenings that has taken place in our country recently—say, the Supreme Court’s ruling in June to legalize gay marriage in all 50 states, or, say, ESPN’s decision in July to give the Arthur Ashe Courage Award to Caitlyn Jenner, the most famous openly transgender person in the world—there’s been an uproar among Christians, that, I would argue, has at times cheapened the name of God in the eyes of others.

Now, my intention is not to open up the debate or ruffle feathers. Rather, with this being a Christian publication, I’d like to take a hard, critical look at ourselves, as a church, regarding how we come across to the world whenever we fire off a post via social media that can potentially be read by people who we do not know. Considering 56 percent of Americans have a profile on a social networking site, I think it’d be foolish not to explore this idea.

Say, for example, that a Christian posts something like, “God would be ashamed of our society,” or “I follow God, not the government,” or, the classic, “God created Adam and Eve, not Adam and Steve.” Say that tweet gets re-tweeted by a couple of your friends. Well, how does that tweet come across to a stranger who doesn’t believe what you believe? Would you ever approach a complete stranger in Wal-Mart who is, say, wearing a turban or a Yamaka, point your finger, and shout, “Jesus is the way, the truth, and the life!” That’s not loving. That’s just rude.

It’s difficult to capture the magnitude of God’s grace and mercy, the core of the gospel, in an opinionated social media post, isn’t it?

People are hyper sensitive about the idea of God nowadays, so I believe it’s a subject that’s worth handling delicately. So, going back to the tweet, would a tweet like this pique people’s interest in God? Or does it turn them off to the whole idea because the God of the universe has been dwindled down to an argument for one person to communicate his or her ideas? Do these posts make people want to know God? Or run from Him?

I have no problems with opinions. It’s one of the great freedoms of our country. But when those opinions have the potential to hinder someone’s view of God, well, I think it’s worth considering how we project our opinions.

My fear is that we too often make God out to seem indelibly small, not mysterious or wonderful. The truth is that God is much bigger than the blacks and whites of morality—He cares about people as they are, not as they should be. Believing in an incomprehensible God of unfathomable grace can be a messy, wonderful thing, and whenever issues like this arise, sometimes following the trails of the divine lead more to grace and mystery than it does to a perfectly packaged conclusion with a bow on top.

Lately, I’ve been challenged to reflect a God that I can’t explain more than a God that I can explain; to gain mystery and wonder in my approach to spirituality (thus expanding my view of God) rather than giving into the temptation of thinking that I have it all figured out (thus reflecting a narrow view of God). Because the reality is that Jesus shattered the mold time and time again whenever people, particularly the religious people, tried to fit Him into tiny, explainable boxes.

I hope that we can approach the hot-button topics of our day with caution and a view of God that makes others want to see Him lovingly running towards them…before they turn their back and run away from Him, all because of something we have said.