By Joshua Doering Sep 27, 2021
Lazio supporters wave flags before the start of a match between Lazio and Roma, at Rome's Olympic Stadium, Sept. 26, 2021. (AP Photo/Andrew Medichini)

Top-flight Italian soccer club S.S. Lazio made sure Sunday’s meeting in Rome with crosstown rival AS Roma was about more than bragging rights thanks to a partnership with Compassion Italia, a branch of the child-sponsorship ministry Compassion International. Fans attending the game, known as the Derby della Capitale, were asked to bring non-perishable food items for children in need.

It is the first of several collaborative efforts planned between Lazio and Compassion. The two-time Italian champions will help support Compassion’s mission of releasing children from poverty through the partnership. 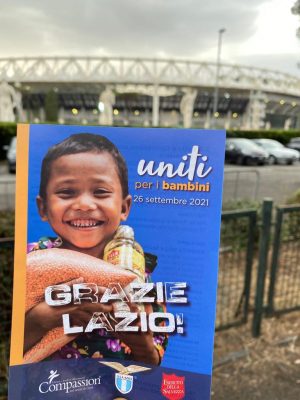 “All initiatives that serve to cheer people in difficulty are welcome,” Lazio President Claudio Lotito said in the press conference announcing the partnership last week. “We want to become promoters and to encourage other clubs as well. Sport must entertain but also make us reflect. Society is often short-sighted, we want to raise awareness and protect the interests of all human beings. These values must be highlighted, beyond the football cheer.”

The food collected will be donated to families in Rome, where both Lazio and Roma are located. Though Compassion primarily works in developing countries, it was pleased to invite a trusted partner, the Salvation Army, to assist with the food distribution.

“Although we primarily operate in developing countries, we are honored to collaborate in this first and commendable initiative of Lazio fans for the collection of non-perishable food for the needy of our nation,” Silvio Galvano, director of Compassion Italia, said in the press conference. “We believe it is our duty to contribute to the good of a society that is more supportive of those who suffer, especially children.”

Added Paolo Longo of the Salvation Army, “Already in normal times, the conditions of many families were difficult. After long months of pandemic, the situation is even more severe. For this we are grateful to participate, together with S.S. Lazio and Compassion, to the distribution of food parcels in favor of many families. As always, we are grateful for the generosity of all those who contributed.”

The game itself didn’t disappoint, either. Lazio scored twice in the opening 20 minutes, the first coming from Sergej Milinkovic-Savic in the 10th minute.

PEDRO SCORES AGAINST HIS FORMER CLUB 👀

Lazio double their lead within the first 20 mins of the Derby della Capitale 🔥 pic.twitter.com/SK6LwhuBWE

After Roma pulled a goal back right before halftime, Felipe Anderson found the back of the net in the 63rd minute and restored Lazio’s two-goal advantage.

Ciro Immobile serves it up and Felipe Anderson slots it home for Lazio's THIRD 🦅 pic.twitter.com/tp7CNFCN9P

His goal turned out to be the game-winner as Roma converted a penalty kick to make the final score 3-2. The victory moves Lazio into sixth place in Serie A and puts them just one point out of the final Champions League place, currently held by Roma.

In addition to their work with Lazio in Italy, Compassion also recently joined forces with athletes across the United States for the Fill the Stadium campaign. The campaign’s goal is to raise a year’s worth of support for 70,000 kids and their families. That number is the average size of an NFL stadium.

For anyone interested in helping Fill the Stadium and supporting children in need, visit fillthestadium.com/give to learn more.