From the Archives: To Stir A Movement 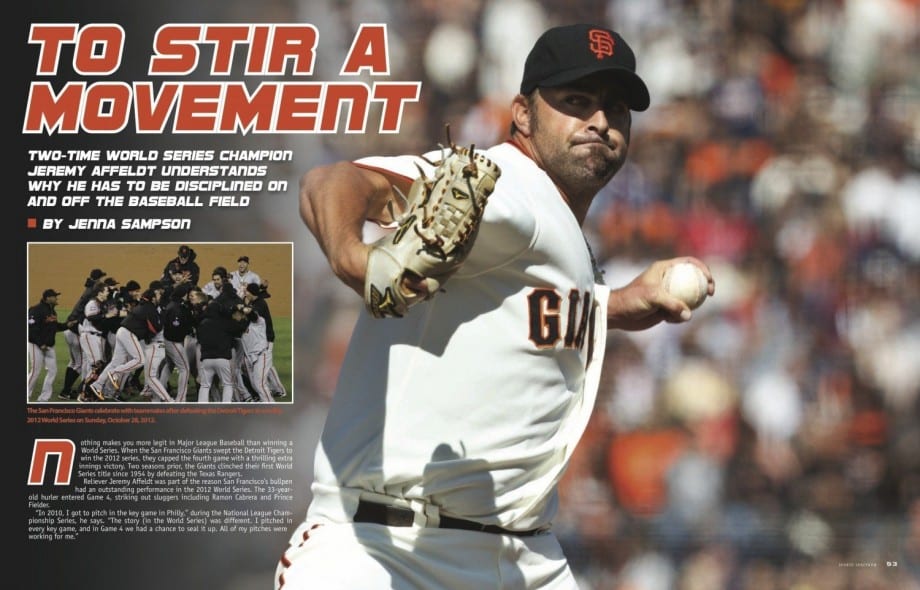 Nothing makes you more legit in Major League Baseball than winning a World Series. When the San Francisco Giants swept the Detroit Tigers to win the 2012 series, they capped the fourth game with a thrilling extra innings victory. Two seasons prior, the Giants clinched their first World Series title since 1954 by defeating the Texas Rangers.

Reliever Jeremy Affeldt was part of the reason San Francisco’s bullpen had an outstanding performance in the 2012 World Series. The 33-year-old hurler entered Game 4, striking out sluggers including Ramon Cabrera and Prince Fielder.

“In 2010, I got to pitch in the key game in Philly,” during the National League Championship Series, he says. “The story (in the World Series) was different. I pitched in every key game, and in Game 4 we had a chance to seal it up. All of my pitches were working for me.”

His performance was fulfilling from both a career and spiritual standpoint. “This time I truly felt like God put me in a place to make an impact—not just be a part of something,” he explains. “It was huge for me to be able to honor my God, but to also prove myself in my career. I was able to come through when I was needed.”

Affeldt made his major league debut in 2002 for the Kansas City Royals, and played for the Colorado Rockies and Cincinnati Reds before signing with the Giants in 2009. “I went through some trying times,” he admits. “I wanted to quit. I went from being on some losing teams and being one of the worst pitchers on the team, to becoming who I am on the (Giants)—my leadership roll and having fun succeeding on another level.”

In his eyes, battling through the 2012 playoffs and winning, was a reflection of how hard the pitching staff worked. When the Giants faced grueling elimination games, different pitchers had sharp performances on the mound. “The starters always do their job,” he says. “And in the bullpen, we’re all able to do each other’s roles, which is really good. We have enough arms down there (in the bullpen), that we can bulldog it out the last three innings.”

The 6-foot-4, 230-pound lefty signed a three-year deal this past winter to remain with his team, which made Giants fans clamor with excitement at the thought of having nearly all of the pitching staff returning for 2013.

Affeldt is far from your typical major league player, though. Yes, a World Series ring is exciting and fulfilling, but as a longtime Christian, he makes an extra effort to look beyond the material things that surround him. His blog, To Stir a Movement, chronicles his passion for Christian social justice, diving into the concept of what it truly means to follow Christ’s command to “Love your neighbor as yourself.” 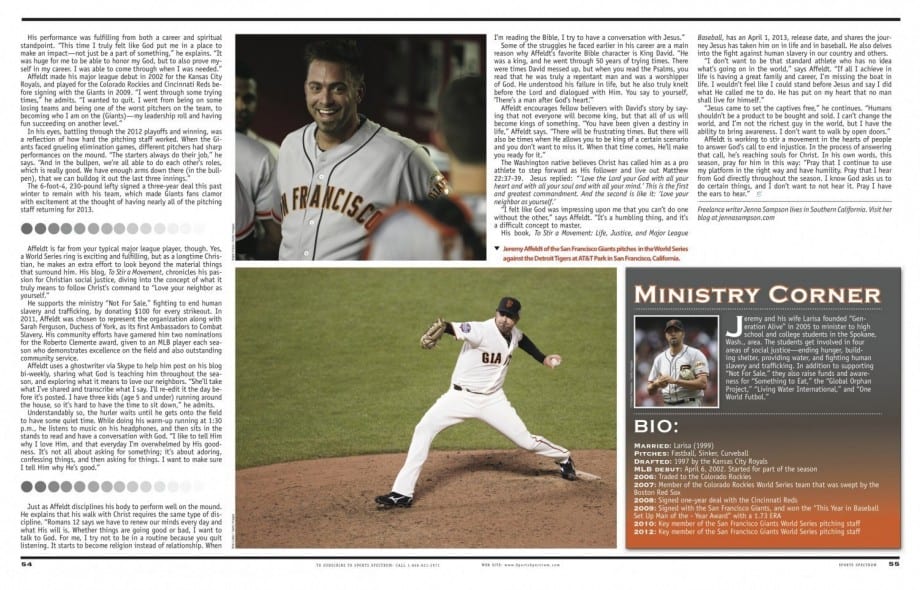 He supports the ministry “Not For Sale,” fighting to end human slavery and trafficking, by donating $100 for every strikeout. In 2011, Affeldt was chosen to represent the organization along with Sarah Ferguson, Duchess of York, as its first Ambassadors to Combat Slavery. His community efforts have garnered him two nominations for the Roberto Clemente award, given to an MLB player each season who demonstrates excellence on the field and also outstanding community service.

Affeldt uses a ghostwriter via Skype to help him post on his blog bi-weekly, sharing what God is teaching him throughout the season, and exploring what it means to love our neighbors. “She’ll take what I’ve shared and transcribe what I say. I’ll re-edit it the day before it’s posted. I have three kids (age 5 and under) running around the house, so it’s hard to have the time to sit down,” he admits.

Understandably so, the hurler waits until he gets onto the field to have some quiet time. While doing his warm-up running at 1:30 p.m., he listens to music on his headphones, and then sits in the stands to read and have a conversation with God. “I like to tell Him why I love Him, and that everyday I’m overwhelmed by His goodness. It’s not all about asking for something; it’s about adoring, confessing things, and then asking for things. I want to make sure I tell Him why He’s good.”

Just as Affeldt disciplines his body to perform well on the mound. He explains that his walk with Christ requires the same type of discipline. “Romans 12 says we have to renew our minds every day and what His will is. Whether things are going good or bad, I want to talk to God. For me, I try not to be in a routine because you quit listening. It starts to become religion instead of relationship. When I’m reading the Bible, I try to have a conversation with Jesus.”

Some of the struggles he faced earlier in his career are a main reason why Affeldt’s favorite Bible character is King David. “He was a king, and he went through 50 years of trying times. There were times David messed up, but when you read the Psalms, you read that he was truly a repentant man and was a worshipper of God. He understood his failure in life, but he also truly knelt before the Lord and dialogued with Him. You say to yourself, ‘There’s a man after God’s heart.’”

Affeldt encourages fellow believers with David’s story by saying that not everyone will become king, but that all of us will become kings of something. “You have been given a destiny in life,” Affeldt says. “There will be frustrating times. But there will also be times when He allows you to be king of a certain scenario and you don’t want to miss it. When that time comes, He’ll make you ready for it.”

The Washington native believes Christ has called him as a pro athlete to step forward as His follower and live out Matthew 22:37-39.  Jesus replied: “‘Love the Lord your God with all your heart and with all your soul and with all your mind.’ This is the first and greatest commandment. And the second is like it: ‘Love your neighbor as yourself.’

“I felt like God was impressing upon me that you can’t do one without the other,” says Affeldt. “It’s a humbling thing, and it’s a difficult concept to master.

His book, To Stir a Movement: Life, Justice, and Major League Baseball, has an April 1, 2013, release date, and shares the journey Jesus has taken him on in life and in baseball. He also delves into the fight against human slavery in our country and others.

“I don’t want to be that standard athlete who has no idea what’s going on in the world,” says Affeldt. “If all I achieve in life is having a great family and career, I’m missing the boat in life. I wouldn’t feel like I could stand before Jesus and say I did what He called me to do. He has put on my heart that no man shall live for himself.”

“Jesus came to set the captives free,” he continues. “Humans shouldn’t be a product to be bought and sold. I can’t change the world, and I’m not the richest guy in the world, but I have the ability to bring awareness. I don’t want to walk by open doors.”

Affeldt is working to stir a movement in the hearts of people to answer God’s call to end injustice. In the process of answering that call, he’s reaching souls for Christ. In his own words, this season, pray for him in this way: “Pray that I continue to use my platform in the right way and have humility. Pray that I hear from God directly throughout the season. I know God asks us to do certain things, and I don’t want to not hear it. Pray I have the ears to hear.”