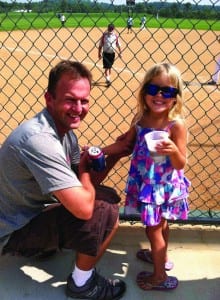 The first time I saw Paraguayan missionary Norberto Kurrle was two years ago on a video screen. I was sitting in the back of an amphitheater at a church service in Roanoke, Va., when a video cued featuring Norberto and his newly adopted two-year old daughter, Anahi, sitting on his lap.

What he said will be forever etched into the deepest parts of my being.

“I don’t know why this has happened,” he said, looking into the camera. “All I know is that there is still work to do.”

What he was referring to was a car crash that occurred five months before on a foggy morning at 5 a.m., when Norberto lost the love of his life, Julie, and his only son, Timmy. He and Anahi were the only ones who survived. In a single moment, his family dwindled from four to two—actually, from five to two, as Julie was pregnant with another child.

The next two years, I thought about Norberto often, though I had never met him or talked to him. I hung a Paraguayan soccer jersey on my bedroom mirror and tied a red and white wristband (Paraguay’s national colors) to my steering wheel. I was continually reminded of the video I watched that day in the amphitheater and the profound words he said after his life became a living hell: “I don’t know why this has happened, all I know is that there is still work to do.”

I have actually written about Norberto before. One year ago, I wrote a column about him and the annual Interstate Church of God Softball Tournament on Labor Day weekend in Roanoke that raises funds for the mission in Paraguay—where Norberto, his brother, and his parents serve. The tournament has endured the last 30 years and has grown to become one of the largest church softball tournaments in the southeast, allowing the Kurrles to continue meeting the needs of the Paraguayan people they are endeared to. As I said in the column, the softball tournament is the finest connection between faith and sports I’ve seen in my years working at Sports Spectrum—and I go to the tournament each year to gather its stories and tell them.

This past year, I left with a story I feel compelled to tell.

Upon meeting him, my most natural reaction was to hug him—to embrace this man who did not know me, yet had impacted me in ways he never knew.

We spent ample time together that weekend in Virginia, and he explained his journey to me in the context of the past three Easters.

The first Easter took place 10 days before the crash. Since they had just adopted Anahi, this was their first Easter as a four-person family…and also their last. Oddly, they also experienced a rare three-day power outage in their home over Easter weekend. Julie wrote in one of her blog posts that it was “a quiet and dark Easter.” Though Norberto didn’t know it at the time, “quiet” and “dark” would describe his life for the next several years.

It’s hard to say whether or not the next Easter ever came for Norberto.

“The next Easter after the crash, I didn’t even know what day it was,” he says. “I didn’t care. I used to buy the paper every week, but I didn’t buy the paper anymore. The Pope came to Paraguay that year. We got a new president that year. But I tuned out everything. I was wrestling with so much pain.”

“You don’t want to suffer,” he continues, “but it’s the only thing that connects you to them.” He pauses, “And to love.”

The week leading up to Easter 2014, Norberto woke up every day at 5 a.m. as a remembrance of his family’s early-morning drive to Asuncion the day of the crash—to be alone with God and step into the stillness of the Almighty, to listen for the whisper of the only One who could possibly breathe hope into his broken world and shattered life.

On Good Friday, which just so happened to fall on the two-year anniversary of the accident, Norberto again woke up at 5 a.m. He opened his Bible and read the story of Easter. I find it inspiring that Norberto even dared to ever open his Bible again, that he even dared to believe that God could possibly be loving and good.

“I read about how Christ died that same day,” Norberto says. “God loved His Son but allowed him to die, and my son also died that same day. Then I realized that Sunday, when we celebrated the resurrection, was a time of joy…For me, I took that resurrection Sunday as my own resurrection day to start believing that life is not about death. Yes, pain will happen. Yes, death will happen. It’s not like I no longer felt the pain, but I started to focus on the hope of the gospel—more so than before. I started to cling to the hope of the future instead of the pain of the past. It was very symbolic to me, and I told myself it was time to live in this new hope. It was time to live my life like I had never lived it before.”

Norberto continues to inspire me. Very practically, I figure that if there is something that can bring a man, who lost practically everything, some sense of transcending hope, then that thing would be worth discovering. If a man, who tragically lost his wife and only son in a foggy moment, “in the hour of his own Gethsemane” as Brennan Manning calls it, can still talk about hope for the future, then surely I want what that man has. That’s a hope I can believe in. Norberto inspires me to believe in hope—because this type of hope has weathered the worst and somehow endured.

As Norberto says, focusing on the hope of the gospel allows us to live like never before.

I cannot wait to be with him again. And give him an even bigger hug.