The goal was daunting, but the leaders felt they had no other choice but to pursue it. So Steve Stenstrom, the president of Pro Athletes Outreach, and his friend Jimmy Mellado, the president and chief executive officer of Compassion International, combined their forces in March 2020 to launch “Fill the Stadium,” a campaign to raise money to care for 70,000 children whose access to support was interrupted by COVID-19 shutdowns.

Twenty-two months later, the $35 million goal has been met — and actually surpassed. Thanks to some generous year-end giving, Fill the Stadium has raised $38,236,626, which will be used for more than 76,473 children.

The effort was led by dozens of professional athletes and their spouses, such as Nate Solder of the New York Giants, Alyssa Naeher of the U.S. women’s national soccer team, Nick Ahmed of the Arizona Diamondbacks, Devin McCourty of the New England Patriots, Jaccob Slavin of the Carolina Hurricanes, and many more.

“The athletes and leaders that have given their time, resources and their hearts to these children can never be thanked enough,” Mellado said in a statement. “They leveraged their influence to spread awareness and help reach this tremendous goal — all for the children. If not for our lead team of professional athletes, this incredible feat would not have been reached so quickly.”

With the impressive goal reached, the Compassion team says it will carry on its mission, as there are even more children around the world in need of critical food, medical care and other support.

“My prayer is that now that the goal for this initiative has been met, the resourced world won’t move on too quickly and forget about the rest of their under-resourced brothers and sisters who desperately need their assistance. They continue to need our support both financially and spiritually. This is why we are continuing this campaign. There are still so many children that desperately need our support,” Mellado said. 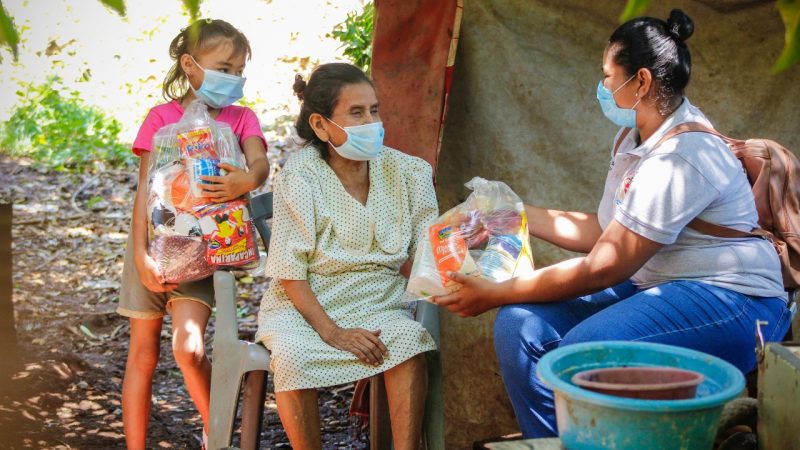 Fill the Stadium grew out of a vision that Stenstrom had.

“After talking with Jimmy about the impact of the pandemic shutdowns on Compassion’s programs, I learned 70,000 children Compassion had just registered would have no hope for sponsorship support because of COVID cancelations,” Stenstrom said in a statement. “We didn’t know then that it would also lead to a hunger crisis. As a former professional quarterback, I realized 70,000 is the same size as an NFL stadium. From that moment forward, we knew that while other stadiums were empty in 2020, this was a stadium that couldn’t remain empty.”

And that’s why numerous athletes jumped on board to help. Almost immediately, before the campaign name had even been decided, Solder and his wife, Lexi, pledged $1 million to support 2,000 families. Not long after, Chris Davis of the Baltimore Orioles and his wife, Jill, pledged a similar donation. “Then it just started taking off from there,” Mellado said. Current and former athletes from numerous sports joined in, along with many others who donated once they got word of the movement.

“We have a stadium of 70,000 fans. Why else do we do what we do?” Solder said. “Are we there just to live and die, to do our game real quick and then go home and store up our riches? That’s not what I believe. I believe we’re here for other people. We’re here to serve the poor, to do what we can with what we have to the best of our abilities.”

Thinking about the atmosphere of nearly 70,000 people in attendance for a FIFA World Cup match, Naeher found it easy to see the faces of children in those seats.

“For me, visually being able to compare that to a specific event or a specific experience, playing in the World Cup final (in 2019) in a sold-out stadium, it was energetic, it was loud, it was an experience that gives you chills,” she said. “To think of that, and kind of reinsert Compassion children in an environment like that and have that visual, there are 70,000 kids that, all around the world, are helped and benefit from this project and are able to live a little bit of a better life.”

In a story about the campaign in the Fall 2021 issue of Sports Spectrum Magazine, Stenstrom said it was amazing to look back and see how the campaign started from just a simple conversation and a few people being faithful to what God had put on their hearts, and grew into something much bigger. Only through God could something like this be accomplished.

“Undoubtedly and without question, only God gets the credit and only God gets the glory in a situation and circumstance like this,” Stenstrom said. “There’s no person who can pat themselves on the back here and say, ‘Look what I did.’ God clearly sees these 70,000 kids and loves them far more than we ever could. He’s invited us into the story He’s telling to give them food, and to protect them, and to protect their families, and to ultimately connect them to the Compassion church partners around the world. And hopefully, they meet Him as a result of that connection.”