It is human nature oftentimes to try harder to make our own plans work through self effort, but doing life with God means surrendering to His ways and plans.

Joel Davis has been learning this lesson throughout his athletic career. The trials he has faced, and the mentors he has met, have given him the ability to be a better witness in the lives of everyone around him.

Born in Midwest City, a suburb of Oklahoma City, Okla., Davis grew up a two-sport star excelling in football and baseball.

“I grew up in a Christian family going to church every week, but I was cocky when it came to sports, and never put two and two together about how I should behave and live a Christian life on the field,” Davis said.

That all changed when he met youth pastor Jimmie Tribble at First Baptist Church in Midwest City.

“Jimmie was allowed to come to Moroney Junior High at lunch and talk to the kids,” Davis said. “After I got to know him a little bit there, I started attending his church, and that is where my faith really began to develop. We would play sports in church and it was there that I learned that it’s not all about the wins and losses. I started really thinking, ‘How does a Christian do this?’ I thought I could do it all by myself, but learned as I got older that I can’t, and it’s not about me.”

Davis starred on the diamond as a first baseman, and on the gridiron as a quarterback, all the way until his senior year at Midwest City High School. In fact, he had more college offers for football than baseball.

“In a group called Bomber Brotherhood, led by Jimmie, we had a team verse for every season. Psalm 115:1 was the verse of my junior year,” Davis said. “To me, it means that in every situation, regardless of the outcome, I was going to give God the glory because of His love and faithfulness to me.

“My friend, Carlos Freeman, and I have a shortened term that we lived by called ‘GGAG,’ which means Give God All the Glory. Carlos has been my best friend since first grade. He was my left tackle in football and has covered my blindside on the field and has been my accountability partner as far back as I can remember.”

Plans changed when Davis sustained a complete tear of his UCL in August 2012, leading into his senior year. It was his second UCL injury, having sustained a majority tear of the same ligament when he was 10 years old.

At that point he needed to choose if he would forego UCL surgery and play football his senior year, or have the surgery in order to play baseball the following season. He decided that competing in baseball was in his best interest and gave up competing his senior year of football with one of the top-ranked teams.

Without Davis, the football team struggled that season, going 3-7.

“It was hard to see the team that I had always dreamed to play for throughout my high school career struggle, knowing that I could be out there and help change the outcome,” Davis said. “What really hurt the most, was being blamed for our team tying the worst record ever at Midwest City High School.”

Davis however, was able to see the greater perspective.

“The first day I knew it was going to be all right was after a football game that we had lost. Jimmie told me that I would not have impacted as many people on the field as I did off of it during the injury,” he said. “God was telling me through Jimmie, ‘This is what I’ve been showing you.’ And I finally got it.”

Davis earned all-state recognition in baseball for his senior season, but still went without any collegiate offers until signing his letter of intent to attend Seminole State Junior College in Seminole, Okla., just weeks before the school year began. He enjoyed two standout years at Seminole State, leading the team in virtually every offensive category.

Davis leaned on James 4:7 during his freshman year and drew inspiration from Josh Hamilton’s “I Am Second” video.

“Humble yourselves before God. Resist the devil, and he will flee from you.” — James 4:7

“This verse meant to me, that during times of trial and tribulation, like josh Hamilton, I would repeat the verse over and over to remind myself to resist the problems I was facing and to trust in God,” Davis said.

The Atlanta Braves called Davis in 2015 asking if he would sign if they drafted him in the 24th round of the MLB first-year player draft, but Davis turned it down, electing to attend Texas A&M (NCAA Div. 1; SEC).

With the on-field successes and friendships Davis found at Seminole, there came a real test of faith when he arrived at Texas A&M.

“At Seminole, we all lived in the same dorms and the field was like home and we hardly ever left. It made it really easy to build friendships and feel like a part of something,” Davis said. “A&M, it was a lot different. I was six-and-a-half hours away from home and only knew one person, so it made it pretty lonely.”

Much more alone time combined with the responsibilities of school were a challenge, in addition to his decision to not engage in after-hours activities.

“Most of the free time we had at A&M was spent by most guys going out on the town,” Davis said. “I didn’t feel inclined to be a part of that lifestyle and it went against everything that I was taught growing up. It got to the point where guys didn’t even ask me to go out because it was understood that I wasn’t going to. I’m an extraverted person so it got pretty tough. The guys knew that I cared about them and I didn’t judge them, I just didn’t want to do that.”

Davis met his girlfriend, Gracie, while on the FCA Outreach team at A&M. He calls her “the best thing that came out of my time at A&M.”

The daily demands of college baseball gave him an opportunity to live out his faith in everyday life.

“Being a student-athlete was tough, but it was an amazing opportunity,” Davis said. “Staying positive throughout the whole day was a big thing for me. I tried to always be a light on campus, to students, my teammates, other athletes, and even to kids of families who might be watching me on the field or talk to me after games.” 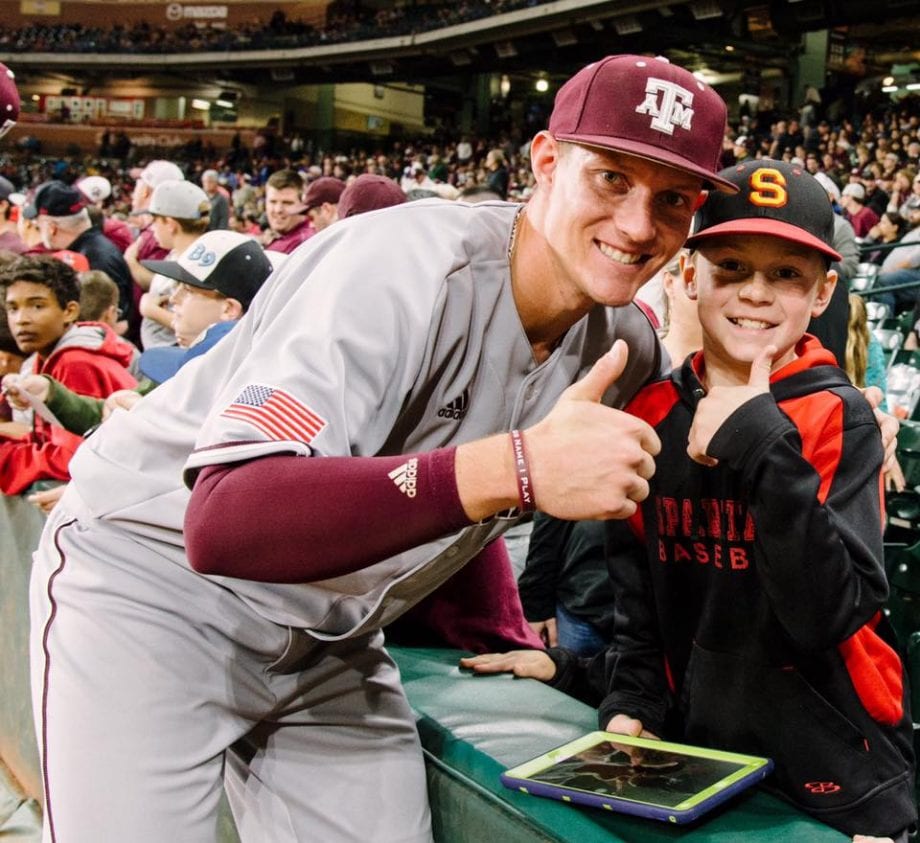 Injuries were a factor throughout Davis’ two years at A&M. His junior year ended with a broken hamate bone in his right hand in the super-regional, and in his senior year, he broke his foot and missed the final conference series, the SEC tournament and regionals.

He returned, with a broken foot, to play in super-regionals and the College World Series, where the Aggies bowed out in two games.

“One of the big things I learned while playing pro ball is you can’t act like a college kid when you hit a home run. I took off my helmet before I made it to home plate and that gave the perception that I was showing up the pitcher, but I was lucky enough to have the older guys stand up for me because they knew I was young,” he said.

During the offseason, Davis is a substitute teacher at the local junior high and high schools in Midwest City and speaks to local youth baseball teams on the importance of education and work ethic.

Davis has signed with the Schaumburg Boomers (Independent, Frontier League) for 2018.

“This coming year is about getting back to my old self,” Davis said. “I want to enjoy the game and have fun. I got too caught up in expectations last year. I put too much pressure on myself and wasn’t trusting the abilities that God has blessed me with.”

In a game where you can be the hero one day and be humbled the next, Davis said he has learned, and is still learning, not to put his identity in or judge his success based on what happens on the field.

“My purpose is to spread the Gospel of Jesus to teammates, supporters, and family,” Davis said. “Whether I go 5-for-5 or 0-for-5, I don’t let it affect me off the field. There’s a bigger plan for me and it’s more than just the game.”

RELATED STORIES:
— Wright State coach Nate Metzger says his purpose is to help players grow as Godly men
— Minor league manager Michael Schlact says job is ‘worthless’ if he’s not pointing to Jesus
— Josh Mitchell on pitching in Royals organization: ‘God was every bit the reason I made it’
— Ethan Chapman: The Diary of a Minor League Baseball Player