The path to the major leagues for Tampa Bay Rays pitcher Andrew Kittredge has been far from straight, but his faith in Jesus has never been in question.

Born in Spokane, Wash., Kittredge says he grew up in a Christian home and attended church with his dad, Roger, and his mom, Rebecca. They attended church twice every Sunday, and the importance of having a relationship with God was instilled in a young Andrew who felt compelled to give his life to Jesus very early on.

“I was about 6 years old, I had gone to church and heard all the Bible stories and I remember vividly walking into my mom’s room,” Kittredge said. “I told her that I had had this realization that I needed to accept Jesus into my heart, and so I prayed with my mom to accept Jesus right there in her bedroom.”

As he has gotten older, Kittredge said his challenge has been in making the right decisions that reflect the truth he knows.

“There were never really times in my life where I questioned whether what I believed was true,” Kittredge said. “There were definitely times late in high school and in college where I felt like my relationship was suffering because of things I did or different lifestyle choices. The Lord convicted me of those things at times, and I had to repent and go back to doing what I know to do.”

Kittredge’s success on the baseball field during these times was tremendous, committing to the University of Washington and being drafted by the Seattle Mariners out of high school.

The struggle in his faith, Kittredge says, was a result of the time, or perhaps lack thereof, spent in reading and studying the Bible.

“I guess you could say I wasn’t really practicing my faith in college and even early on in pro ball,” Kittredge said. “I just kind of kept it to myself thinking, ‘I have a relationship with God,’ and that was enough for me really until a few years ago. I got back into the habit of going to church and focusing on what God’s plan is for me rather than my own plan.”

With the option of going to school or signing with the Mariners, Kittredge chose to go to the University of Washington and forgo professional baseball for the time being. After logging heavy innings in his freshman and sophomore seasons, Kittredge did not pitch as a junior in 2011. He played that summer in Canada with the Okotoks Dawgs summer-collegiate team.

At the end of that summer, the Mariners offered Kittredge a minor league free-agent contract, which he accepted. Kittredge went on to play his first six minor league seasons in the Mariners system with mixed results, reaching Triple-A in 2013 and again in 2015-16. A scripture inscribed on his glove was where he rooted his mindset through the highs and lows.

“Whatever you do, work at it with all your heart, as working for the Lord, not for human masters,” —Colossians 3:23

“I had a couple of rough years with the Mariners and kind of fell out of prospect status, and I think if it wasn’t for certain things like my work ethic and attitude, I don’t think I would have kept a job with them for as long as I did,” Kittredge said, also noting that he was promoted or demoted between minor league levels more than 20 times with the Mariners.

“Colossians 3:23 is something that I like to keep in mind because one of the things I’ve noticed over the years about how I’m perceived by teammates, coaches, front office or what have you, is the things that I can control. And one of those is my work ethic and my attitude,” Kittredge said. “Those are two things that I have control over, unlike a lot of things in baseball that you don’t have control over, like errors or umpires.”

That positive outlook paid off in a strong 2016 season at Triple-A, which led to an offseason trade to the Tampa Bay Rays. He started the 2017 season in Triple-A with the Rays, continued his dominance, and in July of that year, at age 28 and in his seventh professional season, he finally got his call to the majors. 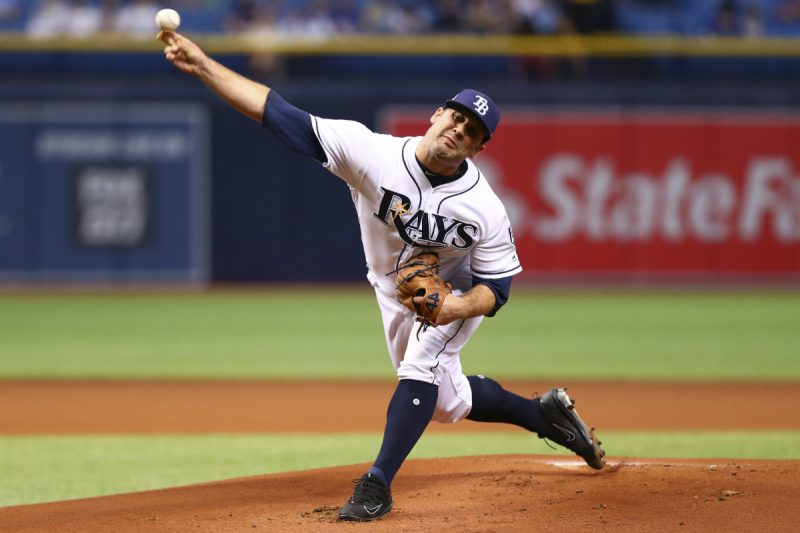 Kittredge pitched extremely well in his first taste of the majors, posting a 1.76 ERA with the Rays in 2017, and in November of that year, he married his wife, Tobey. He said it’s been an amazing blessing and encouragement to be able to share his faith journey with his wife, whom he met at college, on a daily basis.

Kittredge says he has a low-key approach to talking about faith with teammates, trying to simply conduct himself in a way that reflects what he believes in everything he does, and if teammates ask him a question, then he has an opening for conversation.

“I’ve had a few teammates over the years that have had an outward relationship [with God] that encouraged me to want to be that way, but as far as somebody constantly reminding me, my parents are so huge,” Kittredge said. “My mom’s relationship with the Lord is so strong and she’s always reminding me to get in the Word and keep my relationship going.”

It can be difficult to keep faith first while navigating the schedule and demands of professional baseball.

“In pro ball, faith can be limited to chapel on Sundays, and that was an area I was struggling with because I had been to some chapels and wasn’t really getting anything out of them, so I quit going for a while,” Kittredge said. “I kept telling myself that I needed to go because other people can see that I’m going and that would give me more opportunity to share my faith.”

Kittredge’s approach to sharing his faith within baseball remains understated, as he concentrates on living it out in his own life to the best of his ability. And if that prompts a teammate to ask a question as he establishes relationships, then that is his opportunity to have in-depth conversation.

The slower pace and generally relaxed culture of baseball can present opportunities to have those conversations.

“I’ve had some one-on-one conversations with teammates about faith, especially in the bullpen because we have so much time when we talk about anything and everything but the game going on,” Kittredge said.

After a strong 2017, struggles returned in 2018. Kittredge was moved up and down between the Rays and Triple-A Durham four times, and was not pitching as effectively as the year prior.

“[The year] 2018 was definitely a frustrating season for me as I felt like I could never get into a good rhythm. It was a ‘one step forward, two steps back’ kind of year. I know I can be successful at the major league level and I just need to get back to a ‘nothing to lose’ mentality,” he said.

“From here forward, I just want to be the best player and teammate that I can be; the rest is in God’s hands,” Kittredge said. “Hopefully it leads to another opportunity at the major league level, but I’m happy with what I have achieved to this point in my career.”

In reflecting on the lifetime of effort and time commitment that has been required to reach the pinnacle of his sport, Kittredge says he maintains that his identity is still found in Jesus.

“There are only so many things in baseball and in life that you can control, so if you remember that everything you do is for the Lord, you’re going to be better off,” Kittredge says. “Baseball will not be there forever, but I know that my relationship with the Lord will be there forever.”

RELATED STORIES:
— Minor leaguer Joel Davis knows ‘there’s a bigger plan for me, more than just the game’
— Josh Mitchell on pitching in Royals organization: ‘God was every bit the reason I made it’
— Manager Michael Schlact says his job is ‘worthless’ if he’s not pointing players to Jesus

GET IN THE GAME PODCAST: Adam LaRoche – Former MLB Player