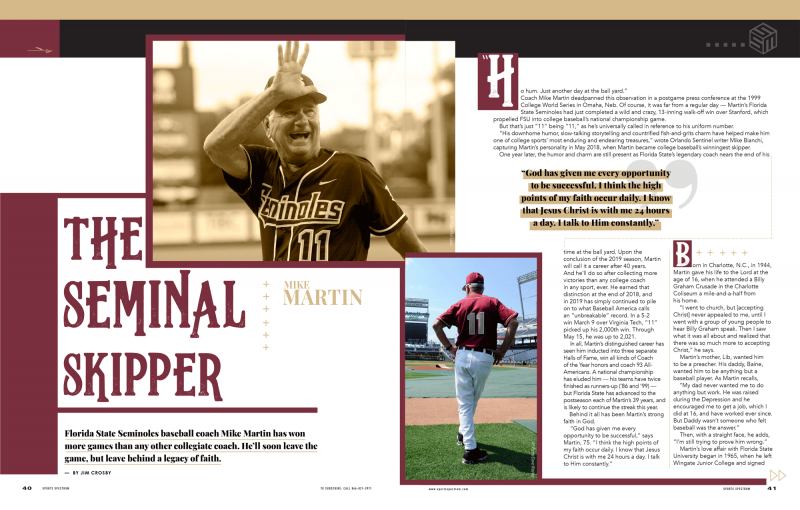 FLORIDA STATE SEMINOLES BASEBALL COACH MIKE MARTIN HAS WON MORE GAMES THAN ANY OTHER COLLEGIATE COACH. HE’LL SOON LEAVE THE GAME, BUT LEAVE BEHIND A LEGACY OF FAITH.

“Ho hum. Just another day at the ball yard.”

Coach Mike Martin deadpanned this observation in a postgame press conference at the 1999 College World Series in Omaha, Neb. Of course, it was far from a regular day — Martin’s Florida State Seminoles had just completed a wild and crazy, 13-inning walk-off win over Stanford, which propelled FSU into college baseball’s national championship game.

But that’s just “11” being “11,” as he’s universally called in reference to his uniform number.

One year later, the humor and charm are still present as Florida State’s legendary coach nears the end of his time at the ball yard. Upon the conclusion of the 2019 season, Martin will call it a career after 40 years. And he’ll do so after collecting more victories than any college coach in any sport, ever. He earned that distinction at the end of 2018, and in 2019 has simply continued to pile on to what Baseball America calls an “unbreakable” record. In a 5-2 win March 9 over Virginia Tech, “11” picked up his 2,000th win. Through May 15, he was up to 2,021.

In all, Martin’s distinguished career has seen him inducted into three separate Halls of Fame, win all kinds of Coach of the Year honors and coach 93 All-Americans. A national championship has eluded him — his teams have twice finished as runners-up (‘86 and ‘99) — but Florida State has advanced to the postseason each of Martin’s 39 years, and is likely to continue the streak this year.

Behind it all has been Martin’s strong faith in God.

“God has given me every opportunity to be successful,” says Martin, 75. “I think the high points of my faith occur daily. I know that Jesus Christ is with me 24 hours a day. I talk to Him constantly.”

“God has given me every opportunity to be successful. I think the high points of my faith occur daily. I know that Jesus Christ is with me 24 hours a day. I talk to Him constantly.” — FSU head coach Mike Martin

Born in Charlotte, N.C., in 1944, Martin gave his life to the Lord at the age of 16, when he attended a Billy Graham Crusade in the Charlotte Coliseum a mile-and-a-half from his home.

“I went to church, but [accepting Christ] never appealed to me, until I went with a group of young people to hear Billy Graham speak. Then I saw what it was all about and realized that there was so much more to accepting Christ,” he says.

Martin’s mother, Lib, wanted him to be a preacher. His daddy, Baine, wanted him to be anything but a baseball player. As Martin recalls, “My dad never wanted me to do anything but work. He was raised during the Depression and he encouraged me to get a job, which I did at 16, and have worked ever since. But Daddy wasn’t someone who felt baseball was the answer.”

Then, with a straight face, he adds, “I’m still trying to prove him wrong.”

Martin’s love affair with Florida State University began in 1965, when he left Wingate Junior College and signed to play for former major leaguer Fred Hatfield at FSU. As a player, Hatfield was known as “Scrap Iron” because of his burning desire to win ball games. Hatfield would do anything to win, including leading the majors in getting hit by pitches. That rubbed off on Martin, who was a fiery competitor by nature anyway.

In his junior year, on the way to an All-American season, the long, lanky Martin took one for the team as he intentionally allowed a late-inning pitch to hit his forearm in a close game at Clemson. He got on base, but later when he started out to play defense in his centerfield position, he discovered he couldn’t get his glove on. His arm was broken…

THE INCREASE: She Will Know She is Loved – Luke Weaver

THE INCREASE: The World Will Know By The Way We Love - Matt Forte

Kansas City Chiefs CEO Clark Hunt: 'My identity is my faith in Christ'