For New York Mets minor leaguer Jake Mangum, there is always room to improve. There is always a lesson to learn. That goes for his baseball career, walk with the Lord or simply day-to-day life. That is why he is the SEC’s all-time hits leader and was a fourth-round draft pick in the 2019 MLB Draft. At a time when everyone is struggling to control the environment around them, his focus is not on the things of this earth but rather on the Creator above.

Growing up in a football family — the son of nine-year NFL defensive back John Mangum; grandson of John Mangum Sr., an NFL offensive lineman for two seasons; and nephew of Kris Mangum, a 10-year veteran with the Carolina Panthers — sports were a part of daily life for Jake. From a young age, though, baseball was his best sport. It was the sport he felt he could go furthest in.

At Jackson Prep in Jackson, Mississippi, Mangum quickly separated himself, helping the Patriots to three consecutive state championships and being named a Perfect Game All-American in 2013, 2014 and 2015. His talent earned him offers from some of the best in the SEC, including Alabama, Ole Miss and Mississippi State. Alabama was his father’s alma mater, and the school he originally committed to. But staying close to his family and in his home state was a top priority. What followed was a decommitment from Alabama, and a decision to play for another SEC powerhouse, Mississippi State. The baseball tradition at the school was a plus, not to mention a veteran head coach in Ron Polk and the fact that Starkville was just 117 miles from Mangum’s hometown of Flowood.

“I chose Mississippi State because of the tradition,” Mangum told Sports Spectrum. “They love baseball in Starkville and I didn’t want to leave the state I’m from. I wanted to stay in state and Mississippi State was a clear choice. I fell in love with the university, what it supported and all the tradition behind it. We get a lot of fans at Mississippi State, roughly 15,500 of them, and man, it’s a big party!”

Mangum’s journey in Starkville kicked off quickly. In no time, after soaking up the advice of older, power-hitting players like 2017 SEC Player of the Year Brent Rooker, he was soon stepping up to the plate with a level of power that surpassed even his own expectations. As he began to pile up hit after hit, year after year, Mangum rolled even closer to breaking the SEC’s all-time hits record, held by LSU’s Eddy Furniss with 352. Finally, in one of the Bulldogs’ final games of his 2019 senior season against Georgia, in front of his home fans, Mangum hit a high pop-up down the right-field line. Despite three Georgia players being in the vicinity, the ball fell in for the hit, which gave Mangum the record.

The end of his collegiate career soon thereafter put him on the list as one of the best to have played in the SEC — not to mention, he led the Bulldogs to two straight appearances at the College World Series in Omaha, Nebraska, in 2018 and 2019. He ignited the offense last season in Omaha, going 5 for 12 in three games, scoring three runs, as Mississippi State fell in the second round to Louisville, 9-8.

“I’d say my favorite two moments ever was when I got the hit to break the record and it’s a tie between my junior and senior years making it to Omaha with my teammates,” Mangum said. “Being able to win that last game [over No. 15 Vanderbilt] to get to Omaha finally in 2018 was so cool. Just to get to Omaha is a huge honor. To be able to serve those guys on both teams and see how God was working on those two teams was a great experience I’ll never ever forget. Being able to get that last hit (to break the hits record) was a special moment as well and something I’ll remember forever.” 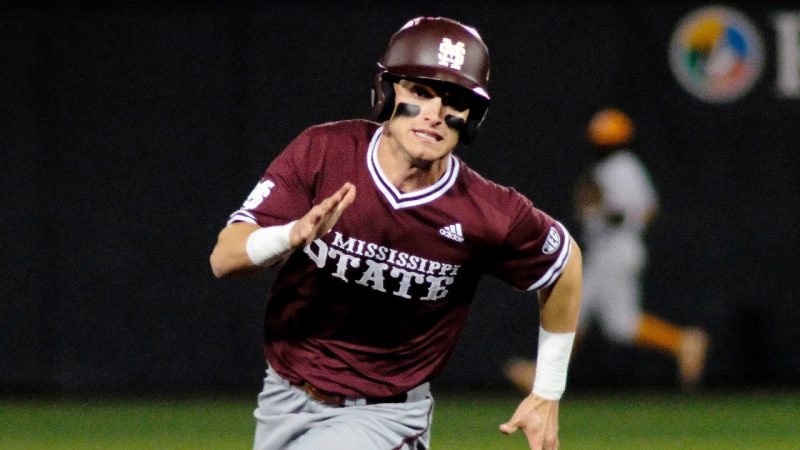 Mangum’s faith in the Lord is what drives him, gives him purpose and keeps things in perspective. For a minor leaguer, working through the challenges on the journey to the big leagues — from long bus rides to countless game days without a break — that is invaluable. As he spoke with Sports Spectrum on an early May morning, he spoke of the patience he learned last year, his first season in pro ball, and how he has continued to be reminded of keeping a patient attitude during a time when everything, including his job, has been put on hold.

“Our human nature is not patient, man,” Mangum said. “We live in a ‘now’ society. I need answers now; I can plug in my phone and have an answer in two seconds. We live in an instant gratification world. The big thing God was trying to teach me last year was patience. A lot of change last year in baseball, and now this year, patience. Take a step back and realize, it’s His plan. His plan is perfect, trust it. In the highs and lows of life, trust it.”

At the same time, his faith has helped him maintain the perspective of baseball not being his everything, but rather using it as a platform to draw others to Christ. After all, he notes, he was drafted by a team from New York City three times (by the Yankees in 2017, the Mets in 2018, and the Mets again in 2019), which tells him God wants him in the “Big Apple” for a specific purpose.

“To be drafted three times by a team out of New York was so cool and shows me God has a plan for me in New York,” said Mangum, who most recently appeared with the Single-A Brooklyn Cyclones. “I’m just going to follow where He leads me.”

If Mangum had to choose one verse that sums up his walk with God, it is John 21:22.

“For me, understanding that baseball is just a game is the biggest thing,” he said. “You walk with God, that’s eternity. So our 80-100 years on earth, if you’re lucky, as compared to eternity, our brains cannot fathom what eternity truly means. That’s our purpose. Our purpose isn’t to hit a baseball or throw a football or shoot a basketball, our purpose is to spread the Word of God and follow Him. He says it very directly in the book of John. He says, ‘Follow Me.’ It’s black and white, there’s no how-to book; it’s simple, two words: Follow me. That’s what our purpose is.”

“Our purpose isn’t to hit a baseball or throw a football or shoot a basketball, our purpose is to spread the Word of God and follow Him.”
— Jake Mangum

While the pandemic has been a trying time for our world as a whole, positives have emerged from it. Paul’s prophetic words in Romans 8:28 certainly apply: “And we know that in all things God works for the good of those who love Him, who have been called according to His purpose.”

For Mangum, it has been the first time since before his college days that he has been able to spend substantial time with his family in the spring. And, as he told his preacher, Chip Henderson, not too long ago, it has given him more time to dive into Scripture and grow in his relationship with the Lord.

“The more you’re in the Word, the more He shows you the way,” Mangum told Henderson on The Jake Mangum Show.

“I’m just trying to grow in my faith with God, and continue to grow in every aspect that’s a benefit to my life,” Mangum said.

Making the most of tough circumstances is nothing new for the 24-year-old. He had five different head coaches in five seasons at Mississippi State, and even spent the last two years of college as a walk-on, allowing the coaches to use his scholarship money for other players. His unselfishness was well-known by his teammates and coaches.

Recently, Mangum has decided to try his hand on a different kind of stage — podcasts. The Jake Mangum Show debuted in March and has featured seven episodes thus far, which are available on Apple, Spotify and YouTube. He has engaged in interesting discussions with Jacksonville Jaguars quarterback Gardner Minshew, 2019 AL Rookie of the Year Pete Alonso, and legendary college baseball coach Ron Polk, amongst many others. More so than talking sports, Mangum hopes his audience will learn just as much, if not more, from his interviewees than he learned from them early on. According to Mangum, there is always something to be learned. There is always an area in which you can improve.

“[Podcasts are] always something I found interesting. I like podcasts and in this life, I’ve met a lot of cool people that have excelled in their areas of life. So I thought, why not get on camera and talk about it? Some things I’ve learned from Coach Ron Polk, I want other people to hear. What Chip Henderson has taught me in my faith, I want other people to hear. It’s a way to share some knowledge with some people that I really enjoy talking to,” Mangum said.

So as baseball looks to return sometime in 2020, Mangum will continue to journey on the path to the ultimate goal: playing in the big leagues with the best of the best in baseball. That is not his ultimate purpose in life, however. It is, and always will be, following the Lord who will guide his steps in life.

“It’s His timing, not your timing,” said Mangum, as he looks ahead to his future in both baseball and life. “He’s going to embarrass you if you think it’s your timing. The more you pursue Jesus, the more you ignite that spiritual flame within you, He will give you a blueprint of how He wants you to live your life. And if you follow that, He will give you a great life on earth that will have trials and hardship, but that’s OK. We have the ability to truly spend eternity with Him. Think about that.”