Jason Standridge is no stranger to the world outside of his hometown of Birmingham, Alabama.

After launching a Major League Baseball career in 2001 with the Tampa Bay Rays, with whom he spent four seasons, he played his final three years with the Texas Rangers, Cincinnati Reds, and Kansas City Royals (finishing with a career 3-9 record and 5.80 ERA). He then signed with the Fukuoka SoftBank Hawks in 2007 and spent most of the following decade in Japan. There, he played for both of the country’s leagues and on three different teams.

Standridge and his wife, Joy, adopted their daughter, Cayne, in 2013 while the couple lived in Japan. “That would not have happened if we never went to Japan [to play baseball],” he told The Japan Times in 2016. “When you think of how powerful it is … she was born in another country, but she is our girl. It is such a cool story. When she grows up, we will tell her, ‘Mom and Dad were sent to Japan to play baseball, but also to pick you up.’”

As a Christian, Standridge fiercely believes that his unique career path and family life are part of God’s plan. While playing, he also sought to share his faith with fellow teammates.

Christian athletes like Standridge often find a connection between their love of the game and their love for the Lord.

Standridge has also found opportunities to share the Gospel through his involvement with Water Mission, a Christian engineering nonprofit sharing safe water and God’s love in developing communities and disaster areas. In 2019, he visited the Bidibidi refugee settlement in Uganda with other former pro baseball players Scott Linebrink and Blaine Boyer. These athletes traveled to Bidibidi to understand how the global water crisis impacts the 230,000 refugees living there. They were struck by the hardship the refugees had endured. 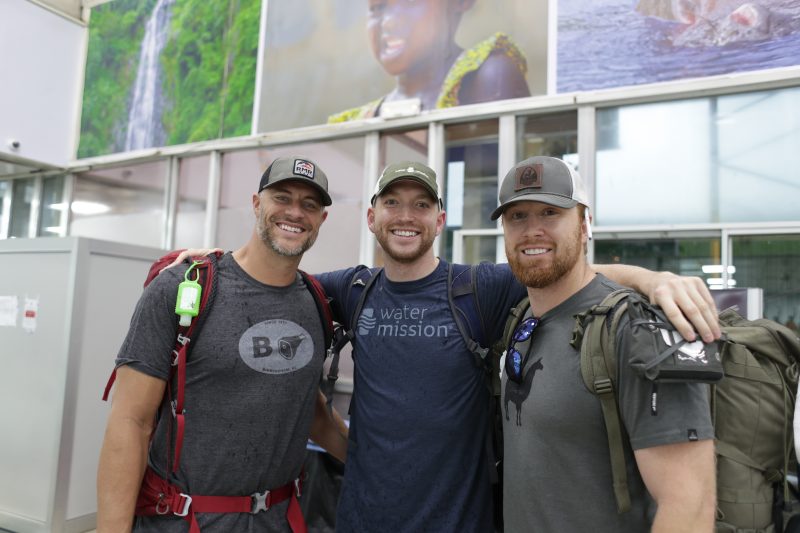 Jason Standridge (left) with Blaine Boyer (right) and Kyle Hanlon on a 2019 trip to Uganda. (Photo courtesy of Water Mission)

Of the 2.2 billion people in the world who lack access to safe water, refugees are among those most impacted. Many Bidibidi residents fled civil war in their home countries and walked more than 15 days to reach the camp. Once there, refugees remain in the camp for an average of 17 years, and water can be scarce and unsafe. But Water Mission is dedicated to building safe water solutions, equipping local staff members, offering trauma healing, and sharing the Living Water of Jesus Christ with the refugees.

“Being able to go around to each tap stand — it is a source of life,” he says. “Water Mission has done an unbelievable job of bringing that to [the refugees], and they’ve expressed how much that has changed their life.”

Standridge and his wife have become regular supporters of the organization, seeing it as a way to advance the work of the Kingdom.

Standridge shared, “Seeing the tangible work going on here and the people who are suffering, I start to ask myself, ‘What can I do personally to be able to support what Water Mission is doing here on the ground?'”

Whether he’s spreading God’s love to teammates, raising a family, or advocating for an end to the global water crisis, Standridge uses his platform to carry out his faith. You can do the same by visiting watermission.org to learn more about serving your global neighbors with safe and Living Water.